South Africa, famous for its history and safaris, today has more and more divers. They come from all over the world to discover the beauty of the seabed in this part of the Indian Ocean. Among these, those of Aliwal Shoal are the most famous. Considered by many to be one of the best 10 spots in the world, this exceptional marine reserve allows you to observe different species of sharks, including the iconic bull sharks. 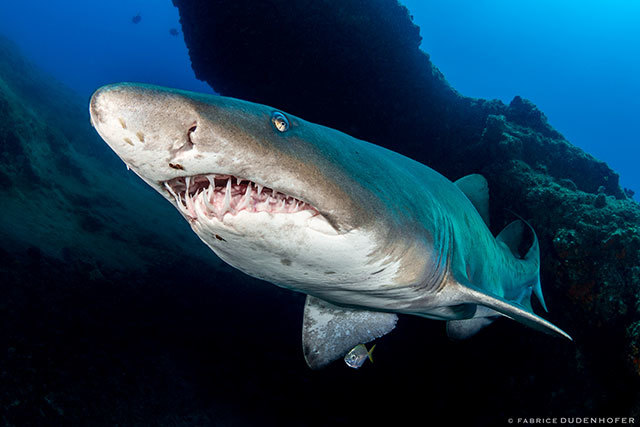 Located on the south coast of KwaZulu-Natal, not far from Durban, the Aliwal Shoal reef is a protected marine area from 2004 where any type of fishing is formally forbidden. Small peculiarity, it is not a classic coral reef but a fossilized dune. It forms a long stop about 5 km, oriented North-South, less than 8 km from the coast. 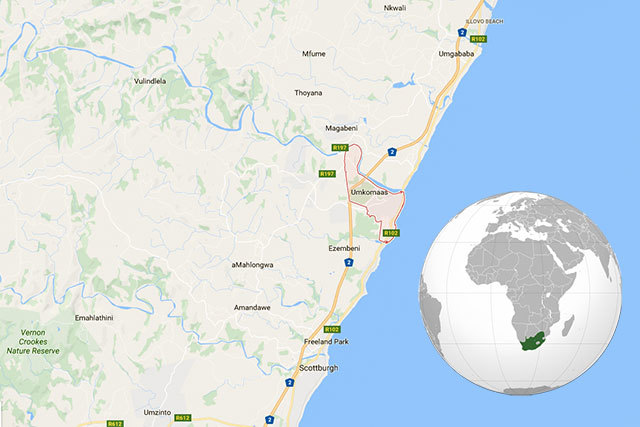 The area offers a wide variety of diving sites: caves, arches, ravines, pinnacles, etc. This diversity of environments attracts an incredible underwater fauna. In addition to being famous for its gatherings of bull sharks, there is a wide range of fish, rays, sharks but also nudibranchs. Depending on the season, several species of sharks frequent the reef: scalloped hammerhead sharks, whale sharks, tiger sharks, fringed sharks and bulldog sharks (also called here Zambezi sharks). Finally, it is not uncommon to see three types of sea turtles all year round (loggerhead, hawksbill and green), as well as stingrays, moray eels, potato groupers and dolphins!

As soon as the water warms up to reach 23 ° C, the chances of encountering whale sharks and manta rays increase. From July to October, the majestic humpback whales are passing through and it is usual to see around the reef their magnificent caudal and the jets of water expelled by their vent. 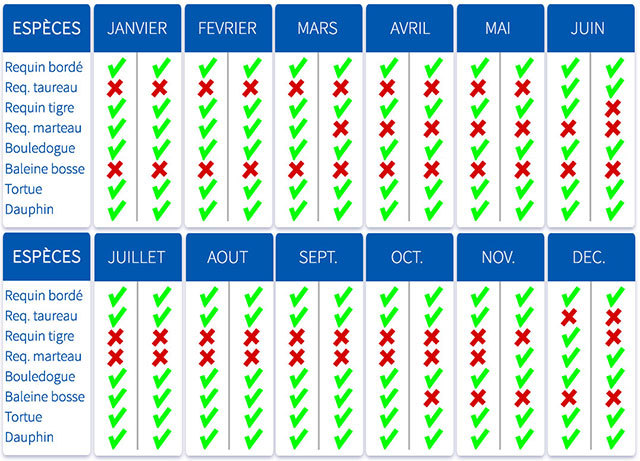 The dives are surprising because in Aliwal Shoal, the classic fauna of the Indian Ocean mixes with that more characteristic of the Atlantic, or even of the Mediterranean. Indeed, on many dives we crossed, brown groupers, sars and saupes at the same time as fish leaves and fish drivers.

In terms of conditions and climate, the water temperature varies from 16 to 18 ° C during the austral winter, and is around 22-26 ° C during the summer. So we plunge all year round on relatively shallow sites, just over 25 m, the top of the reef culminating in some places less than 6 m from the surface. Side visibility, it is very random, changing from one dive to another and sometimes an hour apart. It oscillates between 10 and 15 m and rarely exceeds 20-25 m. As for the currents, they can be strong but the choice of the site is always adapted to the level of the divers present on the boat. Their regular presence is the key to the biodiversity of this area. In particular, Agulhas marine current. Along the South-East coast of Africa from Mozambique, it brings a lot of nutrients so important to marine life.

Every morning the divers climb to the back of a pickup truck that will take them to the Mkomazi River where the RIB starts. Barely embarked, the skipper hands you a lifejacket, and explains the scenario of the minutes to come. The boat must cross the wave barrier, which can be very sporty. Thanks to the experience of the pilot and the respect of the instructions of safety, everything takes place most often in the best conditions. Hang on anyway because it can shake! Nevertheless, the photographers are reassured: the material is arranged in a box where a vest protects it from shocks. The return is to surf with the boat until it strikes the highest on the beach.

From 15 to 20 minutes of navigation are necessary to reach the diving spots. The principle is simple: two “tank dives” with one hour interval between each. Hot drinks, lollipops and cookies are offered. Be careful during this break, it can rock, especially when the boat is stationary. I therefore recommend to people sensitive to seasickness to plan Dramamine or Mer Calme to avoid nausea.

All dives are framed. From the beginning to the end, the guide informs the skipper of his presence via a buoy connected to a reel. Swell can be important, this system is essential for easy identification.
The wind often rises in the late morning, so it is best to leave as early as possible. The immersions therefore take place mostly in the early morning. The appointment is usually fixed at 7h at the diving center.

One of the local attractions is undoubtedly the famous bull shark. Its big mouth, its tapered and curved teeth give it an aggressive look when it is actually a calm animal, placid and harmless. It measures between 1 m 50 and 3 m. Victim (among others) of its facies, the bull shark is like many of its fellow species an endangered species and classified as vulnerable by the IUCN (International Union for the Conservation of Nature). Aliwal Shoal is one of the best spots where you can observe it in its natural environment.

The best season is from June to the end of November, when they come to settle on the reef to reproduce. We can then meet in a single dive groups of several dozen individuals, up to fifty, on some sites. From the end of November, the “ragged tooth sharks” or “raggies” begin a new migration. However, some individuals extend their stay for a few more months, to the delight of divers. Preferring to hunt at night, we find them during the day near caves and cavities, moving like hypnotized ghosts, their mouths wide open to filter the water.

In addition to natural sites (Cathedral, Cave Raggies, Inside Edge et Outside Edge, Chunnel, Northern Pinacles, Manta Point, South Sands et North Sands), there are wrecks for which the reef was fatal. Starting with a sailboat, the " Aliwal "That hit 1849 the high ground while it was totally unknown. This is how the reef took the name ofAliwal Shoal. Although after the sinking, the reef appeared on the charts, it remained no less dangerous. Two other boats, the Or and , made the unfortunate experience.

In the shape of an amphitheater and marked by a large arch, it is one of the deepest sites in the area, - 28 m. In addition to the "raggies", the bull sharks present in large numbers from July to November, we meet many other fish (groupers, potatoes, rays, etc.). 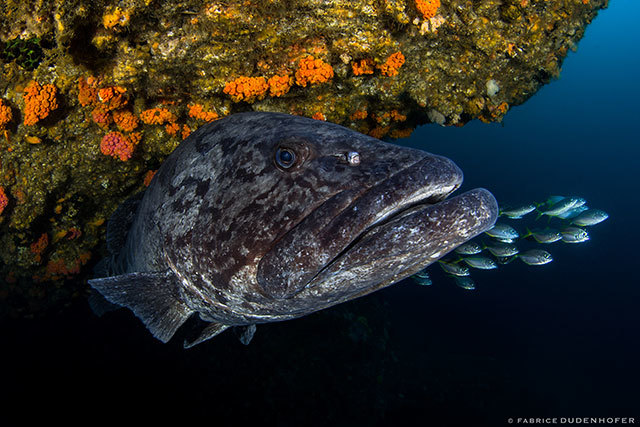 Less deep than the previous one (-18 m) Raggies Cave, as the name suggests, is a must to dive with the stars of Aliwal Shoal. Successions of several perforations in the rock, the entrance of the caves is the best place to watch bull sharks. The site is also very rich in sea slugs and will delight all lovers of macro photography. 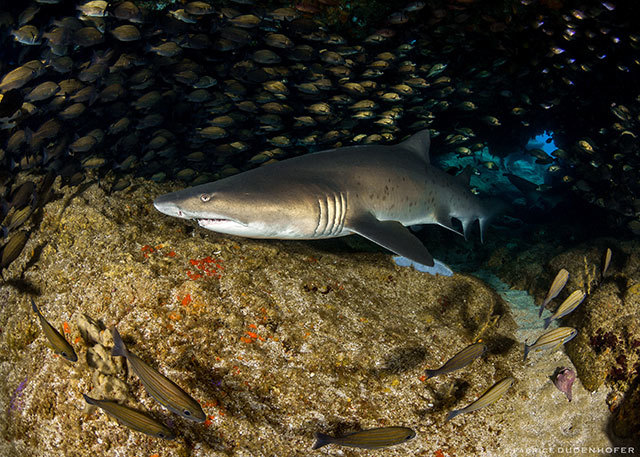 Norwegian long 119 vessel having sunk in 1974 to a depth of about 30 m. Visiting the front and the back in a single dive is difficult. Lying on the side, the bow of the wreck is in fairly good condition and is completely covered with soft corals. Inside, harlequin shrimps, moray eels, Japanese pineapple fish, lion fish and scorpion fish are hiding. The wreck is the home of giant loaches (Epinephelus Lanceolatus), up to 3 m. 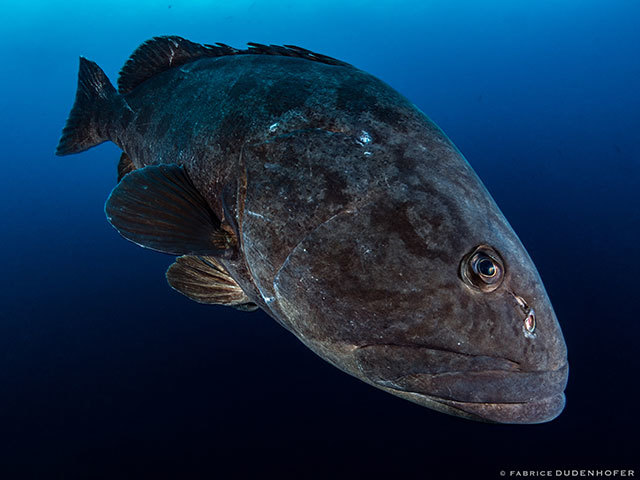 It's about immersing yourself in the water with dozens of sharks. It may sound scary and yet this type of diving, supervised by professionals, is a great experience.

If for some, the "Baited Shark dive" are controversial, we do not wish to debate here, but provide objective information on the progress of these particular dives.
First, sharks are baited with fish oil poured from the surface. This is called "chumming", a kind of odorous broth. Once on an area determined by the skipper and the guide, two huge drilled balls resembling washing machine drums, containing sardine mixture and various fish carcasses, are thrown into the sea. Linked together by a chain , and cans serving as floats, they drift then at the mercy of the current. 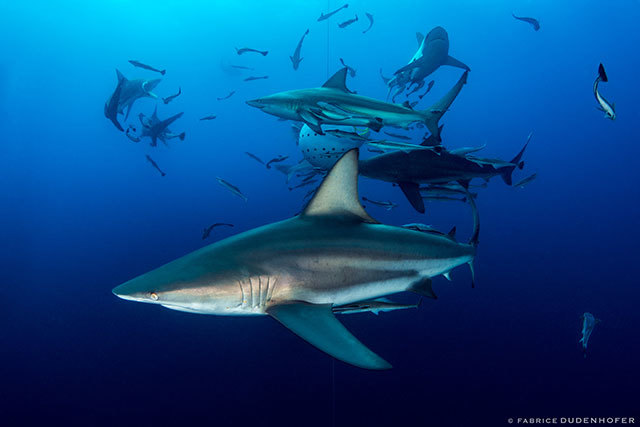 All year round the sharks, in large numbers, are in the game, and sometimes also the bulldog sharks. From December until the beginning of June, tiger sharks are seen regularly.

Not being fed directly, sharks do not go into a frenzy as it has already been seen elsewhere. They are simply attracted by the effluvia released by the contents of the two barrels. The one immersed in -8 m attracts more edge while the one at -15 my goal is to raise the bottom of any tigers, bulldogs or silky present on the site.

Brett and Sonia Louw are the owners ofAgulhas House, a very charming lodge with swimming pool and patio. The rooms are comfortable, clean and have private bathrooms. Each room also has a safe and a fridge for storing beer. A kettle is available with unlimited tea and coffee. Towels are provided. For the most connected, there is a free wifi terminal but the network can sometimes be capricious. Remember to bring an adapter to charge your electrical devices. Located in the center of Umkomaas, all shops are nearby. 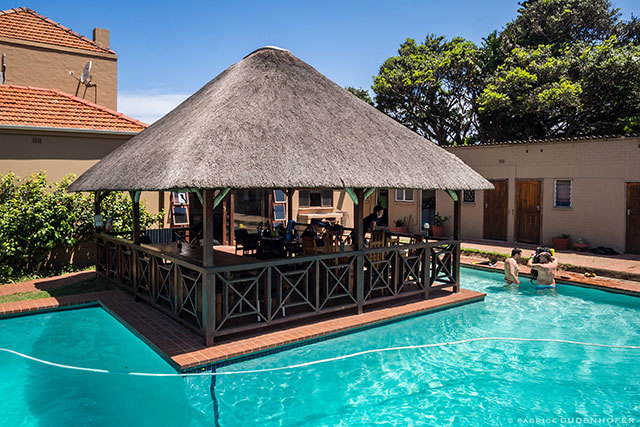 The meals are plentiful and Brett often organizes BBQs at night for you to discover the excellent South African meat. The atmosphere of this guesthouse is very family, Mickey, the father of Brett, takes care of the diving formalities and the guides, Vegard, Michelle and Morgane, as well as the whole team, are at the little care.

Le diving center, RAID affiliate, is installed in the enclosure of the guesthouse. It is therefore very easy to deposit all its equipment. Brett and his English and French speaking team welcome you all year long. 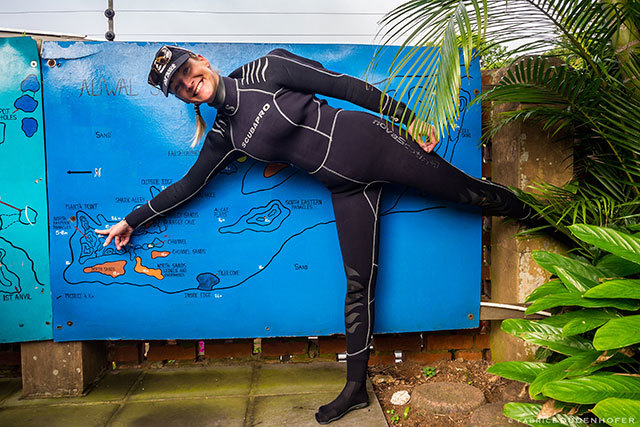 The club only has one-way steel blocks, at choice and at no extra cost from 10, 12 and 15 L. And for all certified divers, Agulhas offers Nitrox 32%. 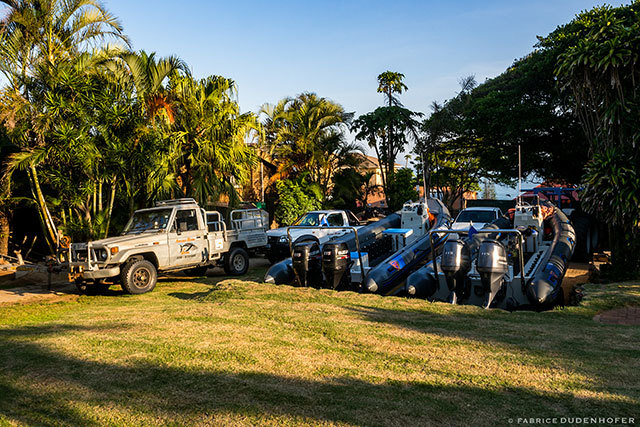 The two semi-rigid equipped with 115 CV twice, board a maximum of 10 divers.

Umkomaas is a small coastal town in South Africa. Located about an hour from King Shaka International Airport and 50 minutes from Durban. The Waves, a bar restaurant overlooking the ocean, is an essential place to indulge in the pleasure of sipping a local beer (Label, Castle, Hansa, etc.), a cocktail or an “adult milkshake. »The R&R (rum & raspberry) as well as the Amarula Dom Pedro are to be tasted. You will find in Umkomaas all the necessary amenities: pharmacy, bank and mini-market.

What to do outside of diving?

The dives taking place in the morning, many opportunities for discoveries of South Africa land side, are available to you in the afternoon, such as visiting a crocodile farm or the Tala Game Reserve. Located just an hour's drive from Umkomaas, it's a great place to see wildebeest, giraffe, zebra and rhinoceros.

Brett's team is happy to help you organize the rest of your stay as well as car rental and extensions.
For snowboarders it is possible to try the bodyboard from the Umkomaas beach. For experienced surfers, it is strongly recommended to go down to about ten kilometers to the south, in Scootburgh. Especially since the beach is protected by a net shark ....

He takes you there
Fun and Fly-Diving offers stays of 7 nights on the spot full board from 1420 € with flights (Paris-Durban with Emirates and stopover in Dubai). Airport taxes, transfers and 8 reef diving are included. In addition, dives "baited shark". Each one costs 85 €. The tour operator does not include shark dives in their package to allow divers to decide for themselves.

Thank you Cécile for this feedback, oh how instructive !!! See you soon