Crowdfunding is growing in popularity. Franck contacted us to present his project documentary film. He needs you.

SEYCHELLES, A SECOND LIFE FOR CORAL

The project presented today is a Documentary Film which follows on from my commitment to nature, and more particularly the protection of the marine world. My goal is to make as many people as possible aware of the urgent need to act… Only on Praslin, isolated in the Indian Ocean, each action taken is more complicated, because it is difficult to find the necessary materials, and difficult to put in place a logistics to carry out the projects… Despite all these constraints, slowly but surely, and like the coral, the solutions have been found… Despite the lack of means, the lack of manpower or logistics, passion, and enthusiasm of each have overcome all obstacles and give birth to this project.

Corals, crabs, through cuttlefish, invertebrates constitute the majority of species that inhabit the oceans. But their importance is felt far beyond the underwater world ... Over the millennia, their fossilized bodies, their shells and their skeletons have formed the layers of limestone and chalk, which cover immense expanses of Asia, from Europe and the American continent. Despite their small size, it is they who in the space of 2 billion years have shaped our planet… ”(Extract from the documentary“ LIFE ”).

For my third documentary, we will discover different ways of contributing to the reconstruction of coral reefs in Seychelles, more precisely in Praslin. We will distinguish two methods used by scientific organizations present on site. Then a third method, which reflects quite well one of my favorite phrases: "a gesture plus a gesture ...". 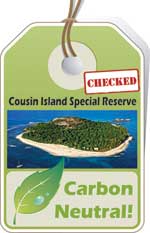 "Nature Seychelles", an NGO (Non Governmental Organization) in charge of the island of Cousin, decided to set up a coral restoration project, funded by USAID (US Agency for International Development) and UNDP / GEF (United Nations Development Program / Global Environment Facility). This project is to help the reef of the island of Cousin recover its health and to consider a plan for the other sites around Praslin.

DISCOVER AND SUPPORT THE PROJECT

A school for sirens

Prepared for you we come to you 4