When you are a diver, training your children in the same way is almost obvious. And often a pledge of shared pleasure, on condition that they respect their differences, do not skip the steps, and do not forget that the desire must really come from them!

We all know children who put their first regulator in their mouths at the age of three or four. However, the Federation has established a legal framework within the clubs, and diving is only officially authorized from the age of eight. And our little divers have their own set of certificates, which marks the progression of their learning: Bronze, silver, then gold diver, before joining the classic course of diving levels from the age of 3. Qualifications also exist, boat, life jacket or palanquée, which also validate their ease.

We all know children who put their first regulator in their mouths at the age of three or four. However, the Federation has established a legal framework within the clubs, and diving is only officially authorized from the age of eight. And our little divers have their own set of certificates, which marks the progression of their learning: Bronze, silver, then gold diver, before joining the classic course of diving levels from the age of 3. Qualifications also exist, boat, life jacket or palanquée, which also validate their ease.

A DIVER A LITTLE DIFFERENT FROM OTHERS

The child is not quite a diver like the others. And before even discussing the physiological differences, which suppose to adapt the diving conditions, it should also be borne in mind that a child diver must be sufficiently mature psychologically to understand the interest of the rules imposed on him. , and the need, for its safety, to respect them. For example, he must understand that he cannot suddenly decide to go up at full speed. It is up to each parent to assess where his child is in this area. The fitness check, which must be carried out annually by a federal doctor, will focus on the child's physical condition.

A BODY THAT COOLS QUICKLY

The body of a child, diving or elsewhere, cools faster than that of an adult. The ratio between body surface area and weight is higher, its reserves, especially carbohydrates, are depleted faster, and hypothermia can therefore occur quickly in a child. And as in general they prefer to become blue rather than admit that they are cold and must go out, it is up to the adult to assess the situation, and also to adapt the dive time to the temperature water, even if the child is equipped with a suit. The hood is absolutely indispensable below 20 degrees.

If the age of eight is considered a good time to start diving, it is also because it is at this time that the Eustachian tubes mature. In principle, they allow us to balance the pressure between the outside and our middle ear without too much difficulty in adulthood, but the system does not work well in young children. And we know that a bad balance is quickly traumatic for the eardrum. Just as in an airplane, it is often necessary on the descent to help our little ones to balance their ears by drinking or sucking a candy, the increase in pressure underwater is a problem for them until they get old. 7 or 8 years old depending on the child. 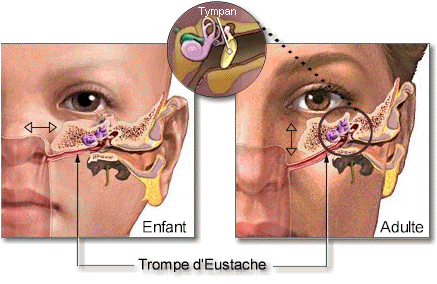 There appears to be no evidence to suggest that children are more exposed than adults to the risk of overpressure in the lungs once their lungs have reached sufficient maturity. Once again, the medical profession estimates that eight years is the age at which the pulmonary system is compatible with the practice of diving: the multiplication of the alveoli is over, there is no longer what we call trapped gases that can increase the risk of overpressure, and even if some elements still need to mature, we are approaching a “finished” pulmonary system.

Nevertheless, it is advisable to limit the dive to 5 meters up to 12 years, and not to exceed two meters for a baptism up to 10 years, 3 meters between 10 and 14 years. We can then go to 10 meters from 12 years for child already experienced. The depth limit adopted by the Federation is also intended to avoid the dissolution of nitrogen in the tissues, and a possible formation of bubbles. It goes hand in hand with relatively short dives. 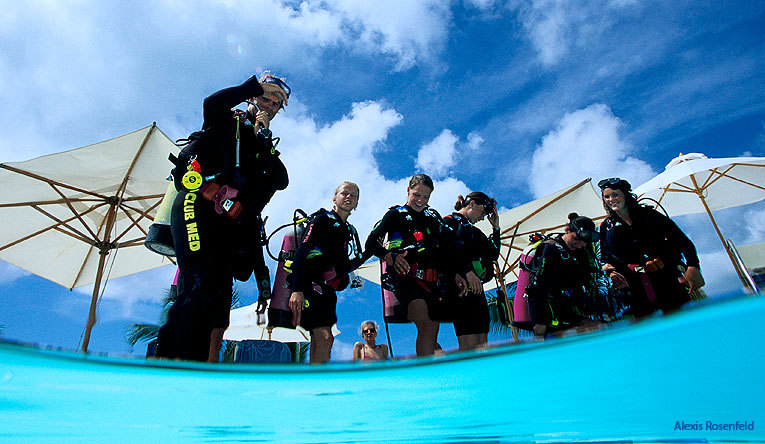 If you decide to register your child in a diving club, all year round, or to have him do a baptism during a vacation, make sure that the structure that will welcome him has suitable equipment. Too large a wetsuit, which yawns, and the dive will quickly be spoiled by the cold. Too heavy a bottle, unsuitable for his body type, and he will feel crushed and uncomfortable. In recent years, manufacturers have developed a number of children's equipment, of course clothing adapted to their morphology, but also regulator tips compatible with their mouths, vests, miniature bottles: everything now exists in their size!

A good diver is a relaxed diver, and this is undoubtedly even more true when you discover the activity as a child. Learning to dive from 8 years old must go first and foremost through play and pleasure: forget the technique, so that breathing in a regulator becomes completely natural, and the liquid element becomes a playground like any other. In this sense, going through the “swimming pool” box before discovering the marine environment can allow the youngest to gain in ease, by multiplying courses, treasure hunts, pirouettes, all that can contribute to making the child a real fish.

AND DISCOVER THE WORLD

The first dive in a natural environment, whether it is a baptism or a first outing after swimming pool training, is always a highlight for a child: they are generally attentive to a thousand details, able to stay stopping in front of the mauve tentacles of an anemone which move in the current, to watch for long minutes small mullet feeding on the bottom. No need to go far and swim like crazy, no need to want to show them everything at all costs: their ability to be amazed is intact. They will learn, ask a thousand questions, will want to find their discoveries of the day in books on their return. The goal will be achieved: diving will no longer be just an end in itself, but the means to explore another world.

HOW ARE THE DETENDERS BORN?

The plane after the dive: finally the facts

I don't want Nicolas from your MF1. Read my 1st degree mess, which suggests that there are others? like what diving is full of masos since those who did not understand the first time persevere! Would you like to teach me to dive? certainly not, because you would have to ask for a certificate from the shrink! ——– and you would probably be right!
The bubbles have invaded my life and I see “stone fish” everywhere, especially at night when I wake up in a sweat, terrified! The vest lifts I know, but in my life I have known “the suspender lifts” I even knew an MF1 or a BES “read good service escagasseur” in Egypt and which forced me to drink 1 liter and a half of water before diving, under the pretext that a doctor had told him that it makes the blood more fluid and that it avoids the decompression accidents (true) in short I almost drowned myself before the hour! then anyway water is well known it makes rust, and I prefer whiskey! The same instructor considered that beyond 30 meters any diving was dangerous! he would have PADI sorry “not said” I would not have understood ——— lol
In any case, thank you for your posts and I hope that one day we will find ourselves in the abyss