Whether you are a beginner or a seasoned diver, palmer is learning to move so you do not waste energy, air, and respect the environment. Essential aspect of aquaticity, the kicking must adapt to the conditions. We asked Wouter Cools, Doctor of Education and Movement Sciences and consultant to the Flemish government with regard to high-level sport, to break down for us, for each technique, the movements to be mastered.

This is the basic technique, the one that everyone learns when they discover diving. The legs move alternately up and down in opposite directions, the thrust of each fin providing forward propulsion. Simple? Yes, as long as you follow a few rules. The prerequisite is to find a good balance in the water and to align. It is essential to stretch your body well (horizontal position), and the legs (feet included) must be well extended to avoid any resistance. Likewise, the head should remain aligned with the body (and not lifted).

Remember that the kick should be much slower than when swimming the front crawl, and your stroke goes through several phases. The first phase begins at the level of the hips, slightly in extension, and continues with the knees, very slightly bent (> 45 °). Finally, the heels are gently pulled back. In the next phase, the leg is pushed down and followed by a kick. Bet on range of motion!

The third phase is characterized by the pause which allows to take advantage of the given propulsion in order to glide through the water: but be careful, to fully use the given impulse, the head, body, hips and legs must remain well. aligned. Then the cycle repeats. But scissor kicking is not necessarily the most efficient or the most environmentally friendly. Vertical movement of water can stir up sediment or sand and reduce visibility. In certain situations, it is then preferable to opt for “frog” kicking. 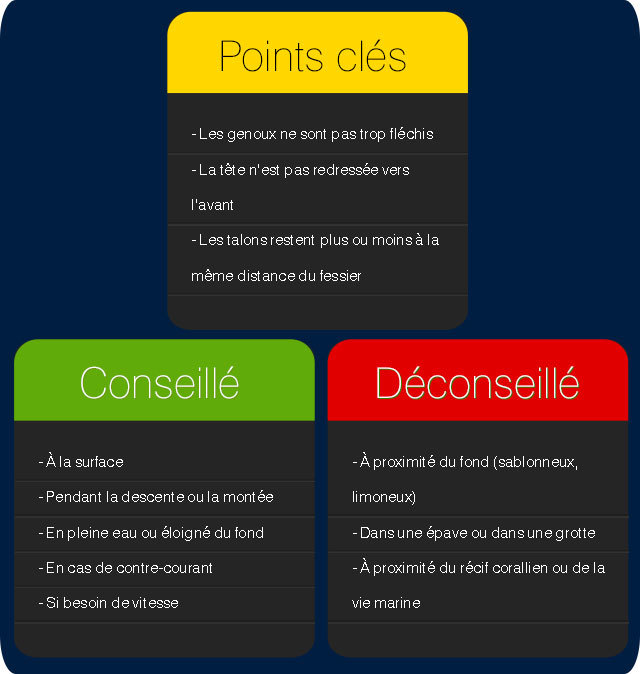 Opposed to the "scissors" kicking in which the propulsion acts in a vertical axis, the "frog" kicks in the horizontal axis. The advantage of this horizontal movement is that the water does not move downwards and the bottom sediments are not stirred. And this technique, with the same energy given at the flippers, offers a greater propulsion. The diver gains comfort, because the body does not swing to the sides. Finally, this technique loads less legs, knees and ankles than other techniques of kicking.

The diver must position himself horizontally, his knees bent at 90 °, his legs pointing upwards. The fins must remain parallel to the bottom. Knees and ankles are tight. To maintain a stable position, the diver will be able to look forward, his spine slightly tilted, his hips pushed forward and arms in front of the body.

- PHASE 2: OPENING OF THE FINS

In the next phase, the fins open on the sides by a movement which starts mainly from the feet, the diver must simply use his ankles to turn the fins outwards while keeping his horizontal position. When the technique is well mastered, the edges of the canopy “shear” the water without considerable resistance.

Tip: The diver's knees may be slightly apart, so that there is a slight rotation of the hips, and the movement is more flexible. But it is better to avoid spreading your knees and legs too much, since it does not contribute to the propulsion and can cause a loss of energy. In addition, fins too far from the body increase the risk of hitting the coral beds.

In the third phase, the diver straightens his toes so that his fins touch each other again, the ankles turn and the legs straighten out gently pushing the fins down slightly. Movement is good when the diver's feet move from a “flexed” position (phase 2) to an “arrow” position, keeping a slight angle of the foot to the leg. The diver should concentrate on pushing the water back and not down using the strength of their legs and ankles.

The difficulty of the propulsion phase is to make a slow but powerful movement. Fast, messy flippers do not give enough strength, create a counter-current for the legs, and give a feeling of discomfort. The diver should avoid stiffening his legs and ankles, and bending the fins should be a natural extension of the thrust. Again, it is essential that the diver remains in a horizontal position. Curved back, hips pushed forward, arms in front of the body and staring forward.

The most satisfactory phase of frog kicking is that of gliding. After propulsion, the diver's legs are almost strained and the knees are slightly straight. The feet and fins are tight and the position is aerodynamic to slide through the water. The position must be maintained for a few moments in order to take full advantage of the propulsion given by the thrust. If the legs move, the slipping is braked, it must allow the push a few seconds for it to work. Then, enjoy! Before bringing the heels up, bend the ankles to find yourself in the starting position, and start again ...

It should be noted that the technique of frog kicking is not as effective with split-wing fins as with conventional wing or turtle-wing fins. 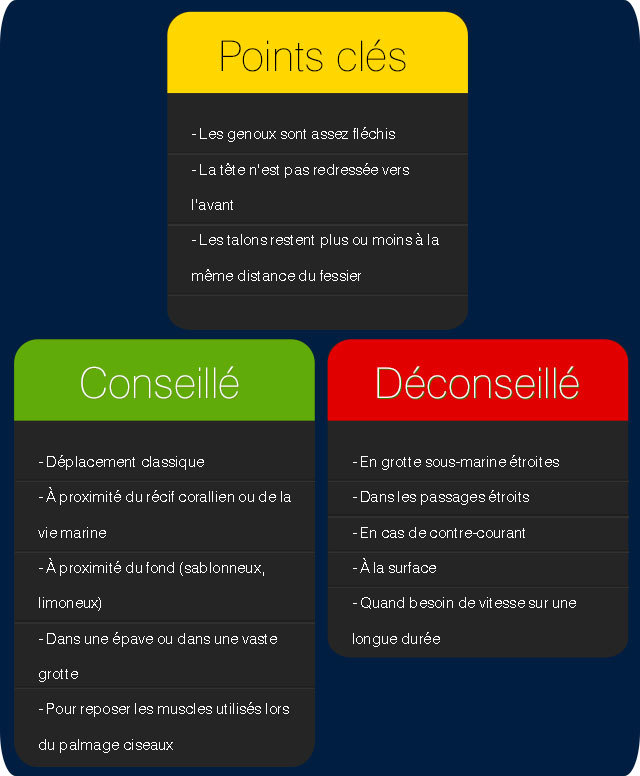 The following variations may be useful in specific situations:

This technique is an adaptation of frog kicking. To perform it the diver does not spread his legs so much. Thus the thighs and knees move less while the calves and ankles direct the rotation. This technique is very slow, and it is mostly used in very small areas.

This technique is almost a counter-frog movement and is used to move away from an object or to retreat. It is a technique that is neither easy nor elegant, but it is practical in many situations. The fins create their propulsion during the first part of the movement, when the spread and extended legs are grouped towards the body. The feet are flexed and the movement stops in the middle in order not to advance again. Finally, the legs gently return to the starting position.

A technique to back more subtly, is that of the opposite kicking. The movement is not graceful, but it can be of great help. The key position is to push the water forward using the top sides of the fins and turn them around without creating much resistance. The movement is performed at the ankles.

In summary, knowing how to swim means knowing how to adapt to the situation, to your environment, in order, in the end, to gain in efficiency but above all in comfort: to save your energy, and at the same time, let us remember, your air! And if breaking down your movements may seem off-putting at the time of learning, correctly mastered they quickly become automatic.

NITROX IS INTOX by FRANCIS LE ...

DIVING COULD HELP THE PEOPLE TOUCHED AT ...

Meeting: What are the security features ...

Le Fourmigue - The beacon of discord

Went back Saturday morning too, after seeing you at the store. I saw a rather rare slug, a Berthelle ocelée !!!
And what is yours?