Whatever precautions may be taken, as a diver we always have an impact on the underwater flora and fauna. This is one of the major taboos: we are told that we should never touch marine fauna or flora. However, some divers give themselves to this activity because they are fascinated or curious. It is an interaction with nature that can seem magical to many, and sometimes even convey their fondest memories. We got the idea for this article for Scuba People during our last visit to Mauritius, where a boss from a famous dive center was able to establish a privileged relationship with moray eels. So we thought we should deal with this fascinating subject, but it seemed to us that it could have generated a wave of criticism. 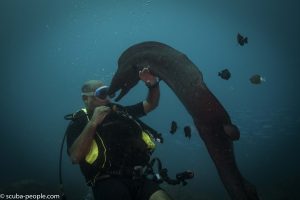 It is fundamental to mention that at every moment we have lived a magical experience. We would also like to strongly emphasize the fact that divers should not attempt to interact physically with an animal, let alone having a good knowledge of the animal in question, which requires specific training as well as knowledge. deep in its peculiarities. For example with sharks or with scorpion fish, you might come across a bad surprise and have bad memories.

Hugue Vitry and his moray eels:

À Mauritius, we had the privilege of diving with Hugues Vitry. It has a diving center in Mont Choisy. He is widely recognized in France for having participated in numerous documentaries around the island. Hugues, wanted to become a doctor, he then changed direction to become a commercial diver. Eventually he decides to go back to Mauritius and starts a dive center after completing its federal certifications in France. 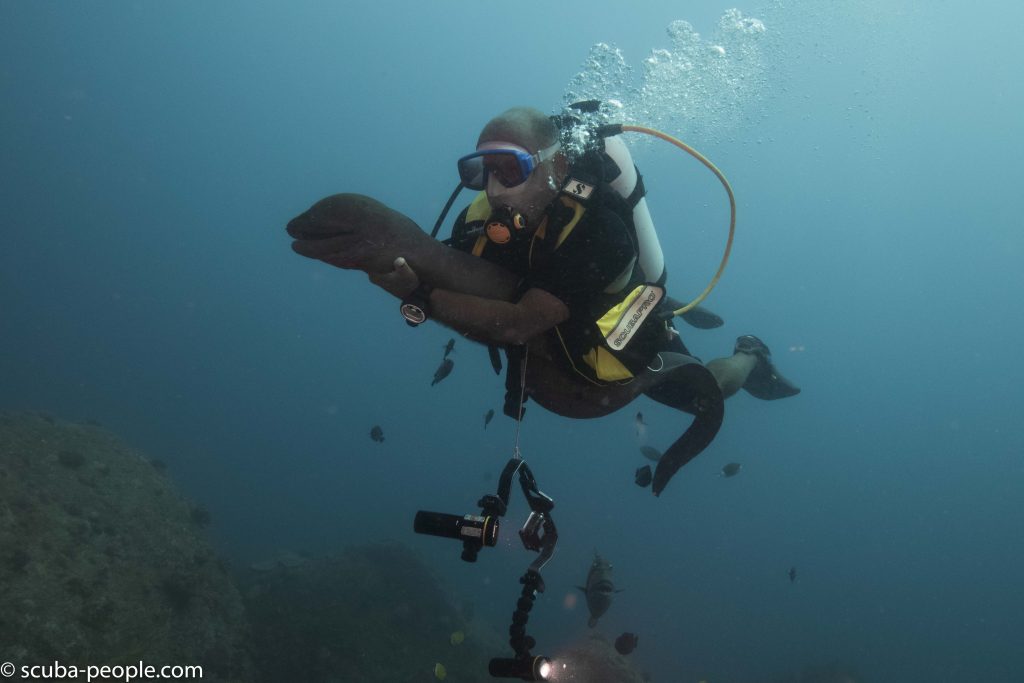 We are in 1985 and Hugues discovered most of the dive sites in the north of Mauritius. He also befriends a moray eel then a second, a third ... his little harem to finally count five. A bond is forged between them and he visits them regularly. Not only do they allow him
touch them, but also take them in his arms and hug them, as if they were his children. These moray can live up to 60 years, Hugues tells us. 33 years later, they have grown and are up to 2,5 - 3 meters long.
To call them, he set up a signal that could sound like the clicking of a dolphin. 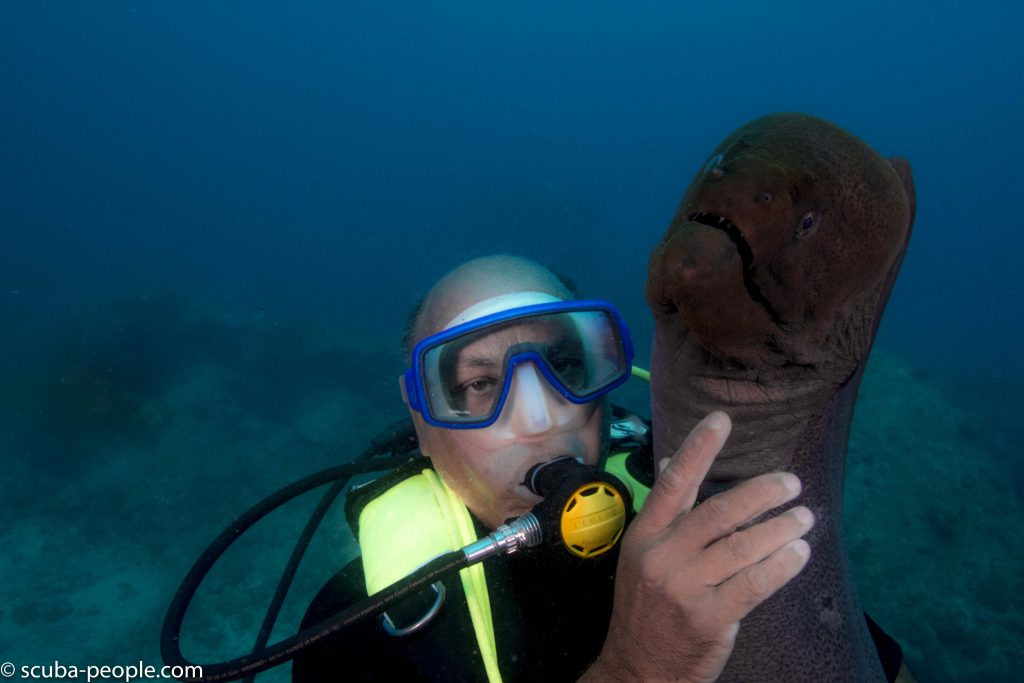 Today, that's part of his routine. With its center Blue water il regularly takes divers to meet her friends and shows us that under certain circumstances they can be docile. When the moray eels allow it, the divers who accompany Hugues can also touch them or grab them in their arms and enjoy their velvety skin. I would normally condemn such behavior myself, but in this particular case, the moray eels are the ones that demand his attention and have truly bonded with him. Thanks to this, local fishermen avoid these areas, and allow their moray friends to have a longer and more serene life.

Hugues has an incredible affinity with the underwater world, he's a real fish man. He rubs his fingers and suddenly reef fish come around him, his place is definitely under the sea. You would think that this relationship is limited only to moray eels. But the same applies to most of the marine species that I have seen him encounter.

Again we would like to stress that we do not promote harassment of marine animals when you dive, but we think when it is done that way it is a whole different story!

Steven Surina, the man who whispers with sharks: 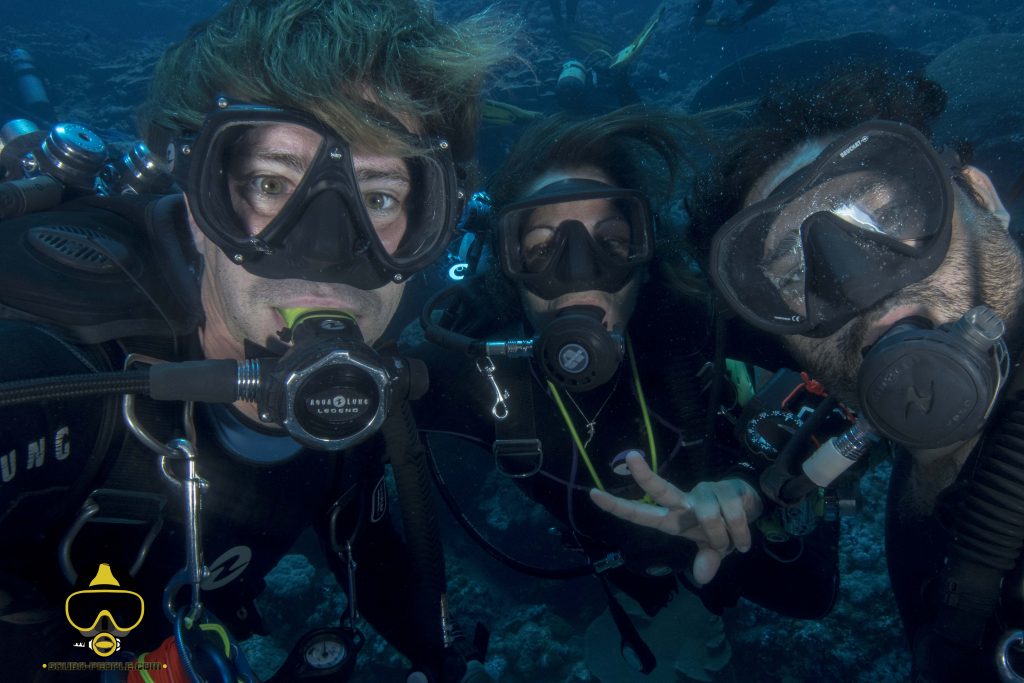 Steven Surina de Shark Education is also a professional who interacts with animals, we recently got to meet him. 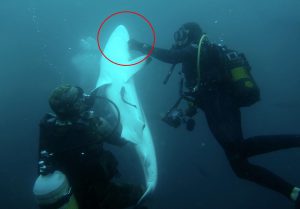 Steven grew up in Egypt, his parents run a diving center in Hurghada. Since then he started his own business, which he named Shark Education. Steven always travels around the world and loves to share his passion for sharks. With H2o, he offers trips with these animals, where he also organizes conferences during these trips. Each lecture is specific to the shark species you may encounter at each destination. He is the only one in the world to offer such conferences. Not only will you get to know the anatomy and specificity of the various sharks, but you will also learn to understand their language, their behaviors, but most importantly, how you should behave underwater in their presence. 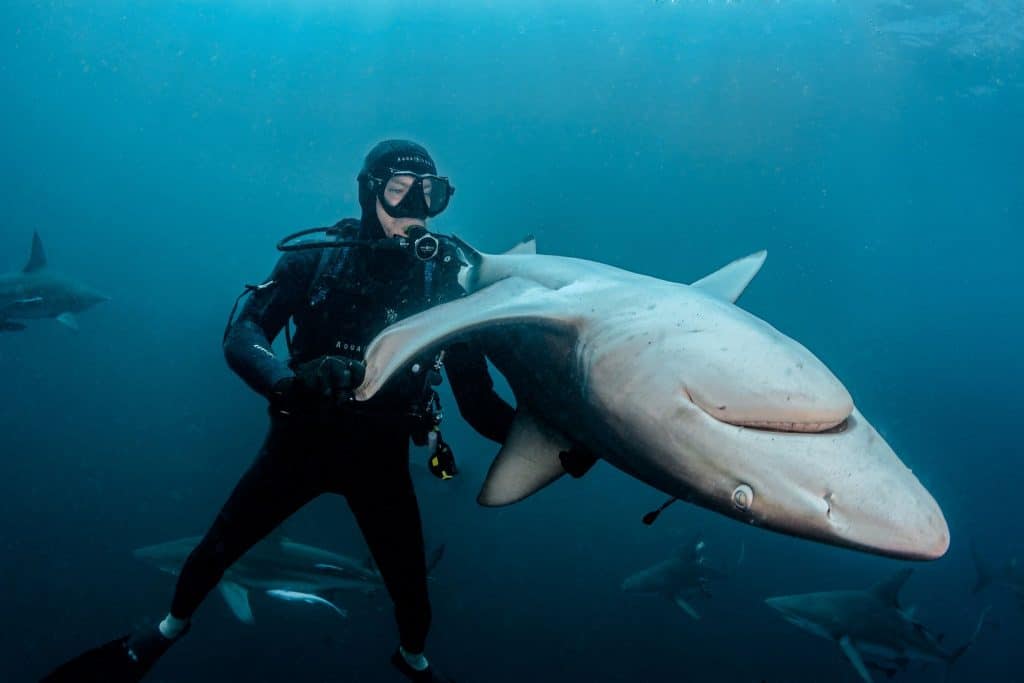 Of course, diving with Steven isn't just about the knowledge he gives you.

Sometimes he uses tonic stillness, this precise and rapid gesture of turning the shark should only be practiced with total mastery. Feeding or touching sharks is usually highly criticized, but in these specific circumstances sharks are preserved and this allows hooks to be removed from their mouths. In many parts of the world, shark tourism brings sustainability to the tourism sector, with its positive impact on people but also on local reefs. 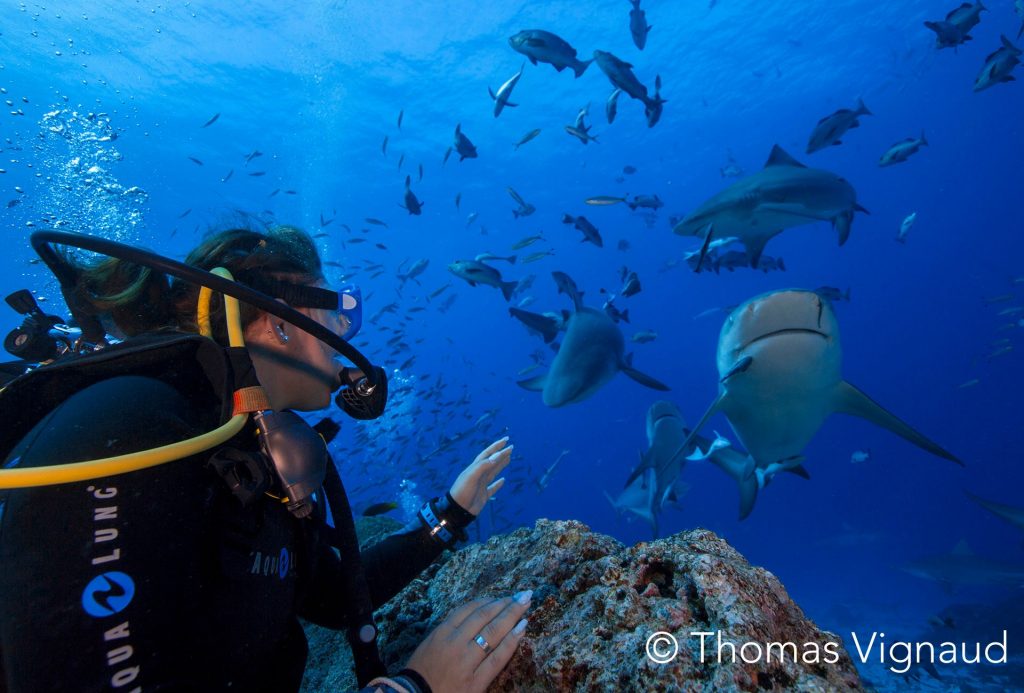 This is particularly the case Fiji or the Doctor Thomas Vignaud set up a shark diving project in 2015, with a center called Barefoot Collection. He first began to dive regularly on a part of the reef little frequented. This reef was very damaged because of intensive fishing. It took Thomas a year to get used to sharks and connect with them. 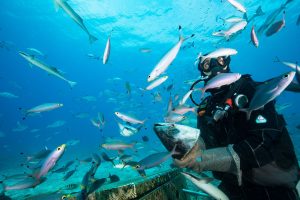 By feeding them this allowed him a close interaction with sharks and gives divers a different view of these animals. You learn how sharks behave among themselves, according to social and hierarchical ranks.

After three years of practice, Thomas left for new adventures, and what he was able to observe during these 3 years is fascinating: The area where he began the practice of feeding is now full of life, many fish are income and even the corals are starting to grow back. 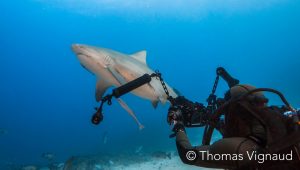 We can now observe not only the Bulldogs sharks, but also up to 10 species of sharks. This project is definitely a success both ecologically and economically for many Fijians who directly benefit from the spinoffs generated by tourists who come solely for this activity. 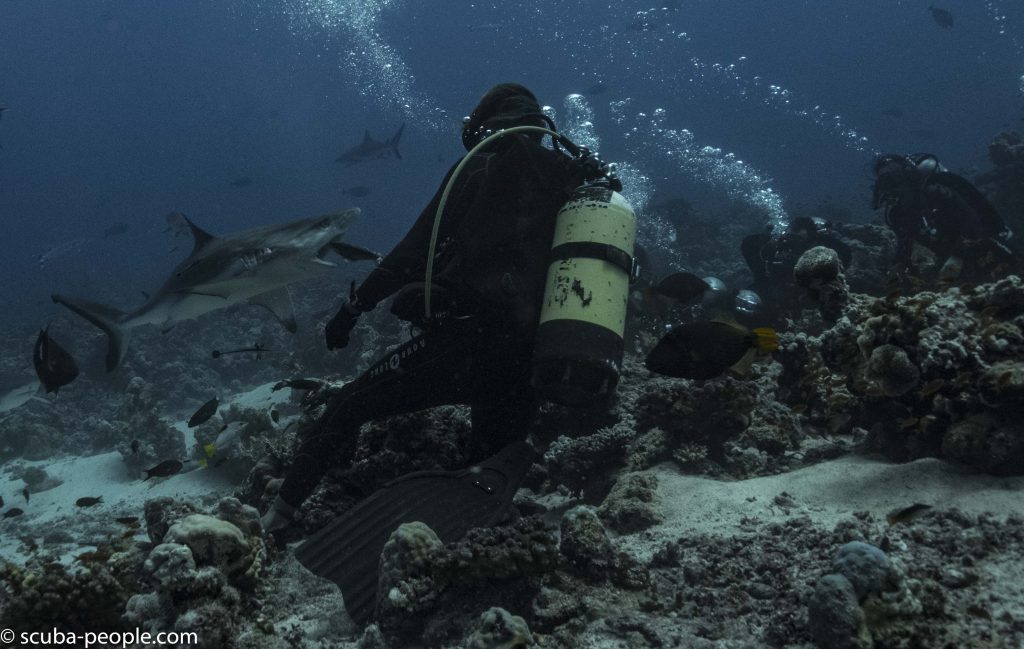 Do not touch without knowing:

Of course, you should never try to touch them on your own. Always be aware that an animal can feel very stressed when disturbed and that its reactions can be unpredictable at any time. These three divers have a special relationship with these animals, where they have established a carefully refined relationship over time. However, if practiced in the right way and under the right circumstances, it cannot be denied that seeing a man and a wild animal interacting together is an incredible experience. Maybe it could teach us a lot about ourselves and these amazing animals. At a time when this environment is constantly under threat, these interactions can also help raise awareness of the urgency of being protected. For those non-divers who see these images, we hope they eventually realize that they have preconceived notions about their very nature, and maybe stop imagining that they are sometimes cruel monsters, and finally them. accept as they really are, amazing and fascinating animals. 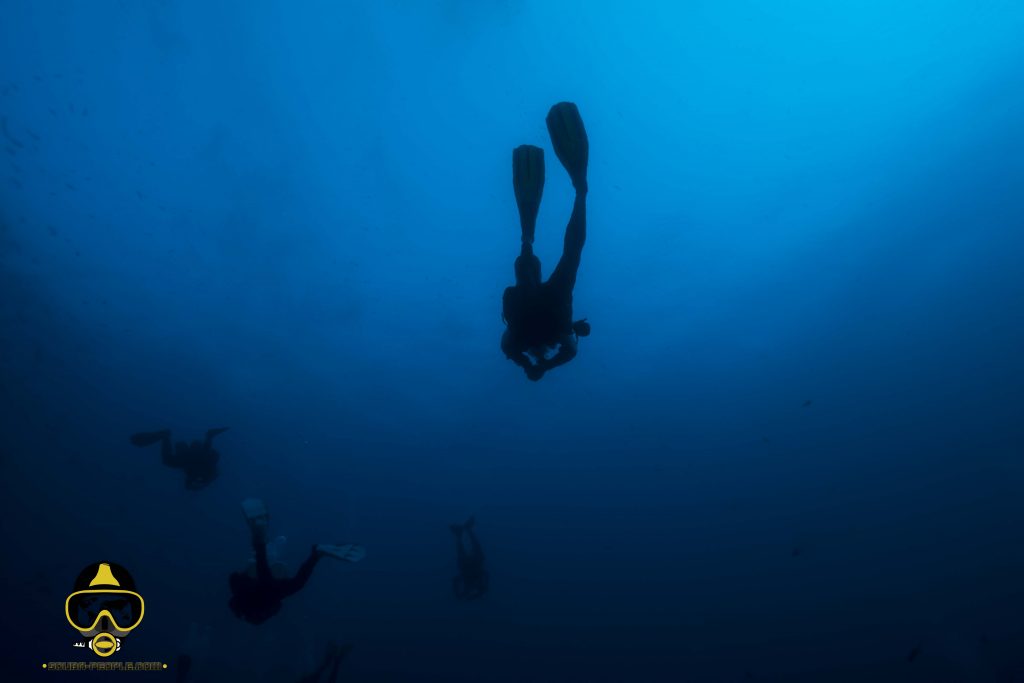 Francis Leguen had also recorded a podcast on the subject with a touch of humor as always: 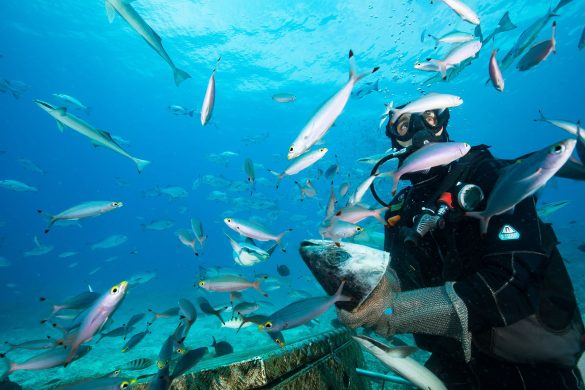 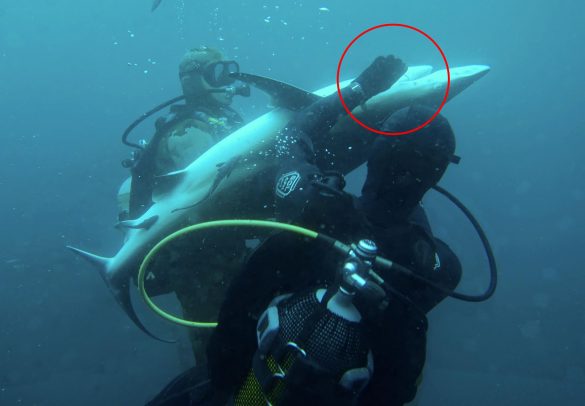 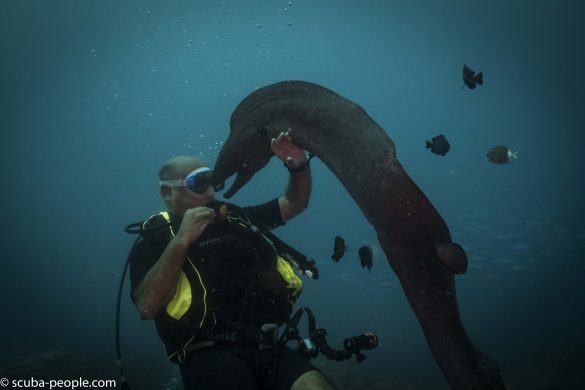 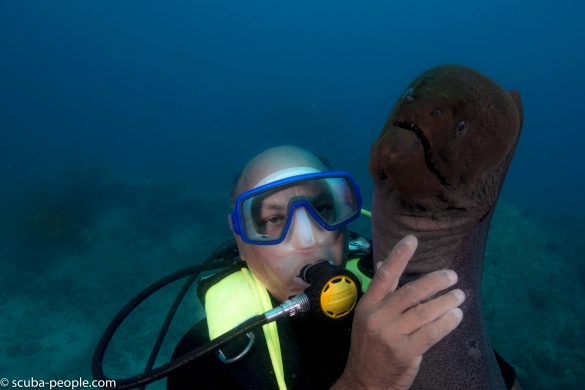 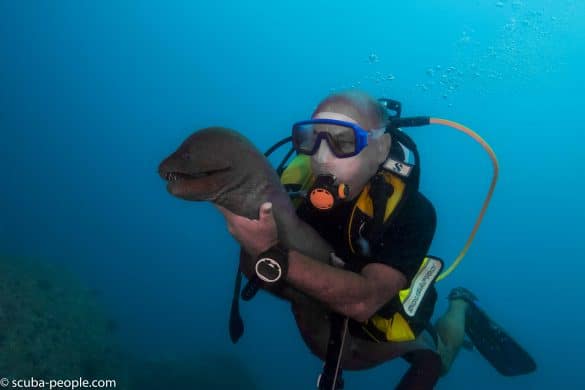 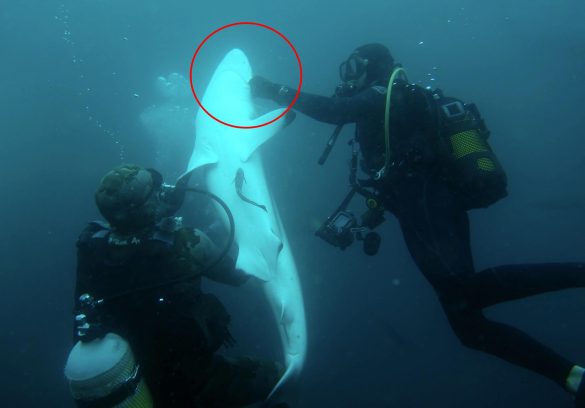 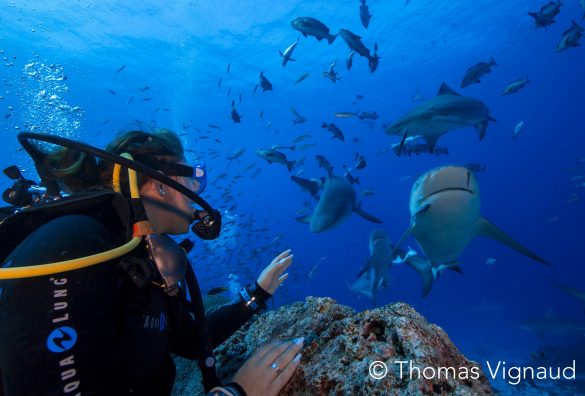 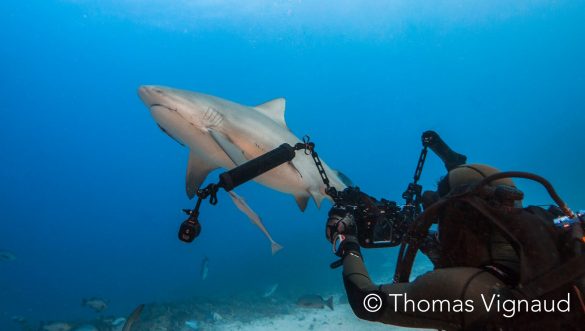 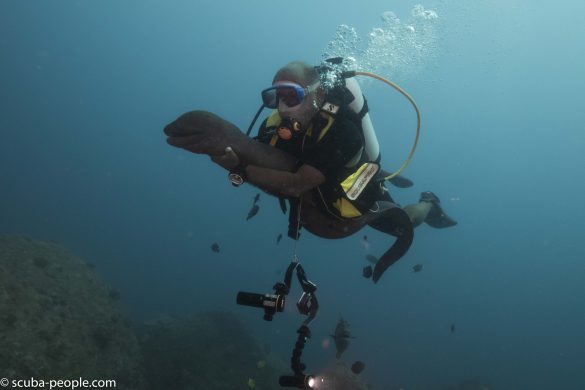 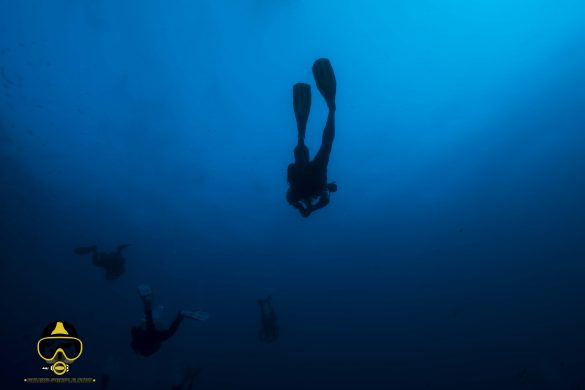 IN THE COOK ISLANDS, A MARINE RESERVE TWO TIMES ...

I HAVE NOTHING AGAINST TURTLES by Francis ...