A new Indonesian Expedition ends with our last cruise between the underwater splendours of the seas of Banda and Arafura and encounters in Papuan land. Each year we set off to discover a new site or return to the footsteps of old trips, and Indonesia brings us astonishment, discovery and delight every time.

FROM THE BANDA SEA TO PAPUA

18 nights aboard the Ambaï-Wallacea, Jérôme Doucet's brand new wooden boat, took us from Ambon to Agats without ever ceasing to surprise us. From the Banda Sea to the south coast of West Papua, the reefs teeming with life amazed us: nudibranchs, crabs, toad fish, purple yellow and black leaf fish, striped snakes, pipe fish ... but also hammerhead sharks, mobula rays, turtles, wobbegong sharks, schools of jacks… each dive will have been a treat, each site was majestic and we never felt any downtime.

RETURN OF NATHALIE, ONE OF THE ADVENTURERS OF THIS JOURNEY:

From Ambon to Agats, from the Moluccas to the south coast of West Papua, this is an extraordinary trip, almost alone in the world! From island to island we once again set off to discover some of the most remote places in Indonesia ... The road from Ambon to Agats to the Papuans Asmat, is a route not to say not taken by the diving boats. Guaranteed tranquility and assurance of pristine reefs with varied and very rich corals. It is a rare privilege to be able to make this trip, organized by H20 with the complicity of Jérome Doucet, who has enough confidence in his new boat, the Ambai, and especially in his captain, to negotiate a navigation that is sometimes difficult at the approach to the south coast of West Papua, especially facing estuaries. 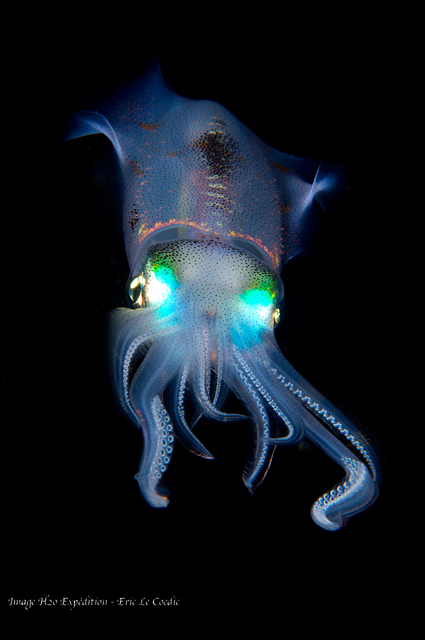 DIVING ON THE SPICE ROUTE

Beginning of the underwater festivities in Ambon (or the little Lembeh), with its muck-dives under the fishing boats where we could observe harlequin shrimp, scorpion fish, leaf fish, ribbon morays and other magnificent oddities! Big stage after the Moluccas, Banda Neira, former world capital of nutmeg. An island that the Dutch preferred to exchange for Manhattan to gain control over the whole spice trade… Today Banda Neira still lives on nutmeg, but the city only shows traces of a past splendor, among others the fort Benteng Belgica. From the top of the towers and their splendid 360-degree view, our Ambai boat looks great at the foot of the volcano which dominates the bay.

The boat is perfectly equipped for diving with a large rear deck, a compressor Nitrox, large tables for photographers, in addition to the room dedicated to them. And for those who go directly from diving to idleness, a front deck full of charm, furnished with a comfortable lounge in a shaded area, and big beanbags in the sun for sunbathers. And always the all-smile service to Indonesian. 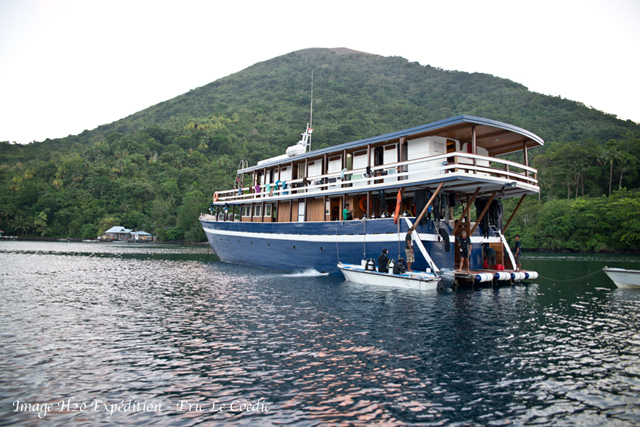 On the Banda Neira dives program: Vertiginous drop-offs, superb sea fans swinging in the current, mobula rays, eagle rays, hammerhead sharks in the blue and on the reef, orangutan crabs or multicolored shrimp. Something to please everyone.

Then head south-east, towards Manuk Island, with its forests of gorgonians, its sponge chimneys and its swarms of snakes, olive ridges or striped knits. It comes from all sides, not fierce, sometimes to the point of tickling our hands, they are so curious about our actions. Our Indonesian guides don't like it at all! Snakes are not aggressive, but terribly poisonous. Here again, from hammerhead sharks to pygmy seahorses, it is difficult to anticipate which “macro or wide angle” lens to choose…

Most of the dives up to Papua, are in the 25 30 meters area, with beautiful landscapes, giant arches like Hatta reef, and pelagic and small along the river or along huge fields of garden eels on sandy bottoms ...

In diving, the pearl of this cruise will have been undoubtedly Little Komodo or the lost paradise of Triton Bay on the south coast of West Papua ... At the heart of these islets and wild meanders cradled by lush vegetation remain virgin sites offering a biodiversity that we hadn't dared to dream… The visibility was there and the site unveiled its impressive quantity of multicolored soft corals visible from the surface, an indecent number of pygmy seahorses, shrimps by the thousands, harlequin ghost fish in the curtains of black coral, a real festival of weird and tiny crabs that delight macro enthusiasts…. But also wobbegong sharks, crocodile fish, pink leaf fish-Barbie, dragonet, hairy squat lobster, from the largest to the smallest….

The first part dive ends in Timika with the full of our boat from a ferry Papou, change of scenery. 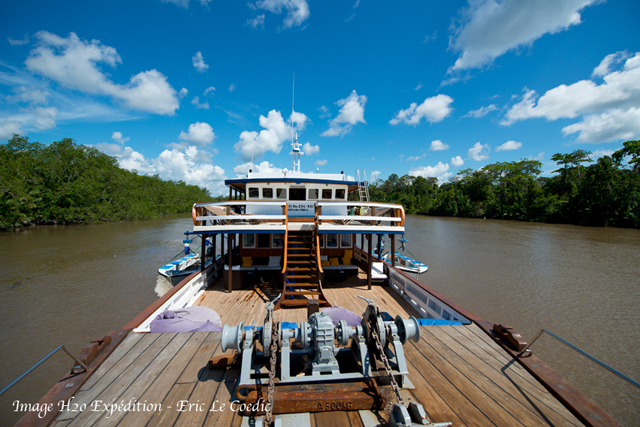 REST THE RIVERS OF PAPUA

We tackle the most delicate part in terms of navigation, the upwelling of rivers from the city of Agats, to meet the Papuan villages with our guide Thierry Robinet, this Frenchman living in Bali, specialist in expeditions in the most secluded corners of Indonesia. Arun, a 50-year-old English speaking Papuan, accompanies us in the villages visited. We spend two days in Warse, first welcomed by the village chiefs and the chief of the tradition, for a giant palaver, several hundred Papuans are waiting for us in the longhouse, the common house where all decisions are made. Can we visit the village and attend a party? The discussion is purely formal because our arrival is expected, but we have to sacrifice custom and respect protocol. We do not understand what is being said, but in the end everyone smiles and shakes hands, the emotion is palpable. 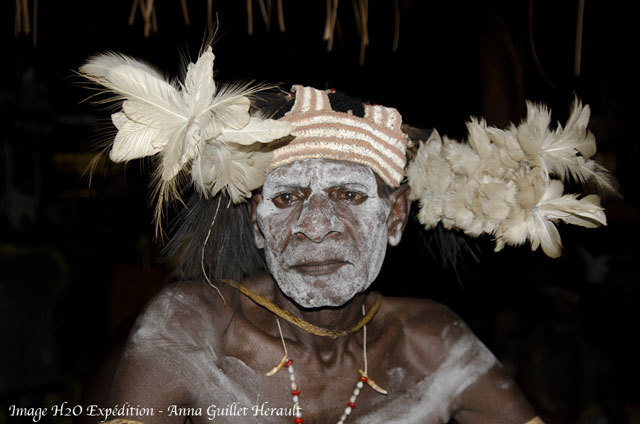 Good news for us, the Asmat were cannibals not so long ago that it is they who would have eaten the young Rockefeller in 1961, during one of his anthropological expeditions. But today the Asmat, are fortunately especially famous for their art of the sculpture and the engraving which are found in various collections like that of the museum Rockefeller of New-York ... 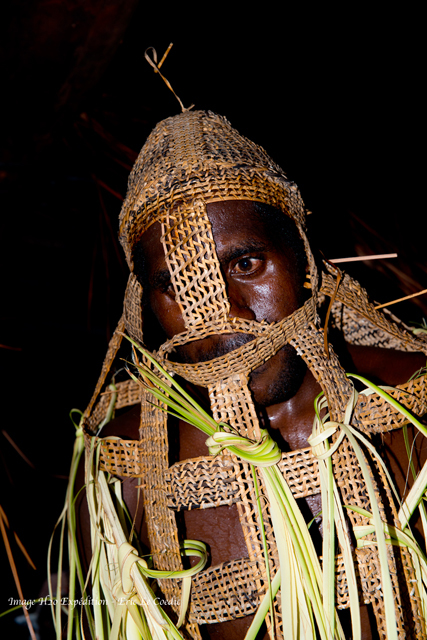 In spite of all the place remains very isolated, today, hardly 150 tourists set foot every year in Agats, the chief place of the province, and even less in the villages. During our visits, each time, it is the same reception, the crowd on the banks or at the edge of the pontoon, a passage through the longhouse, and a walk between the houses, separated by long wooden walkways. serve as street. It must be said that all the banks are marshy, the houses built on the mangrove are on stilts, and the circulation would be impossible if there were not these elevated passages.

In Warse, the men offer us at nightfall the dance of masks, these braided costumes to chase away evil spirits, to the rhythm of drums and songs, "strangers" are there you never know! 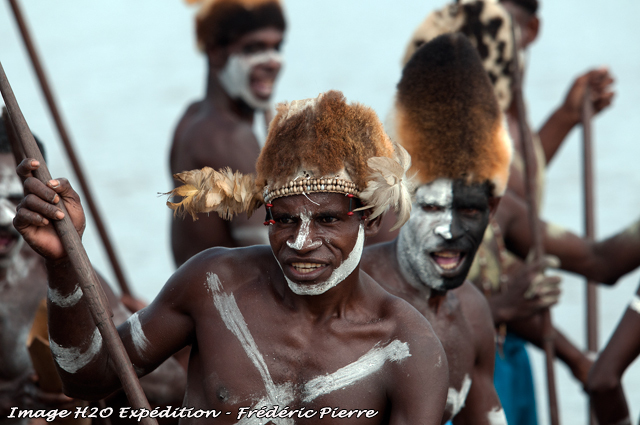 DISCOVER VILLAGES FROM ANOTHER WORLD

The next morning, all the canoes are out for a parade around our boat, the men wield long paddles in rhythm, heads adorned with caps in cassowary feathers, or in couscous fur, an adorable little animal that often ends well its life badly… We are invited to go aboard to reach the shore, please do not play the fool to avoid capsizing. Our hosts call the spirits of the dead, then set up the totems in front of the longhouse. Scene of daily life in the villages, a fisherman, water up to the waist throws his nets into the setting sun, children slide on a piece of wood along the muddy banks, elsewhere, men transform logs In slender boats, women weave the palms for the roof of a new house. Everywhere woodworking to make sculptures, and cassowary hunting, which lives in the hills. One midday, a group of Papuans climbs on the boat and looks attentively at the finishes of our boat made entirely of wood: a very large ship for them! They came to ask for some fuel. The government put them on the bank, to clear a large plot. They haven't seen anyone for several weeks, haven't been paid, and are starting to find the time long. We stop in their camp in the afternoon. Quickly, quickly, they roll up the mats and embark on a frenzied dance punctuated with hoarse songs, some seem in a trance. The floor of the longhouse trembles under our feet, but she resists!

One of the last images of this trip at the end of the world, probably the most confusing ... a new human experience ends with our return to the small port of Timika ... 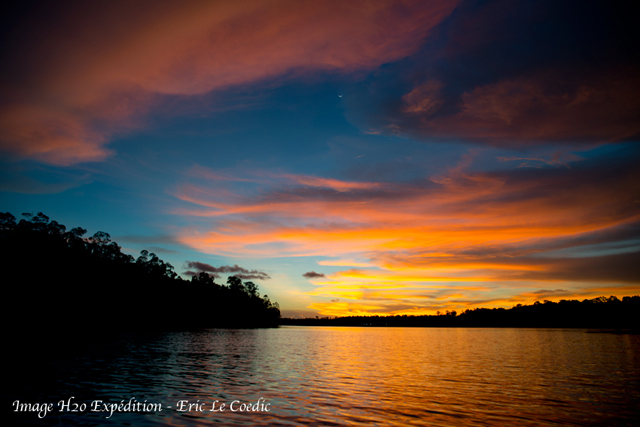 Next meeting in Indonesia with H2O Expedition ... November 2013, a new cruise from Sorong to Manokwari, this time to meet the whale sharks who come to feed in the fishing nets.

Malpelo, to the kingdom of hammerhead sharks may 2013

Galapagos, Wolf and Darwin where everything can happen ... November 2013

By continuing your navigation, you accept the use of cookies to improve the functioning of our site and the user experience.Ok