Home All SectionsPets Diving with whales in Tonga
PetsGreenland - with four paws to the iceberg!

The island of Vava'u is very famous in the Anglo-Saxon world for sheltering from July to November the famous humpback whales - Megaptera novaeangliae - These come to shelter in the warm and protected waters of the archipelago and the females having given birth in July - August mother their newborn, while the males that have followed them struggle to win the favor of the available females. When the little ones are old enough to make the trip, in October or November, all these little people will migrate to the Antarctic where the whales will spend the winter feeding mainly on krill - Euphausia superba.

TONGA: THE OTHER END OF THE WORLD

Tonga is practically the antipodes of France and the trip in itself is already a performance. More than 3 days, 3 airlines, 5 stopovers, nearly 32 hours of flight in total, one night in a hotel, an aborted landing due to the weather ... were necessary to reach the archipelago of Vava'u, the second largest and most northerly island in the Kingdom of Tonga. 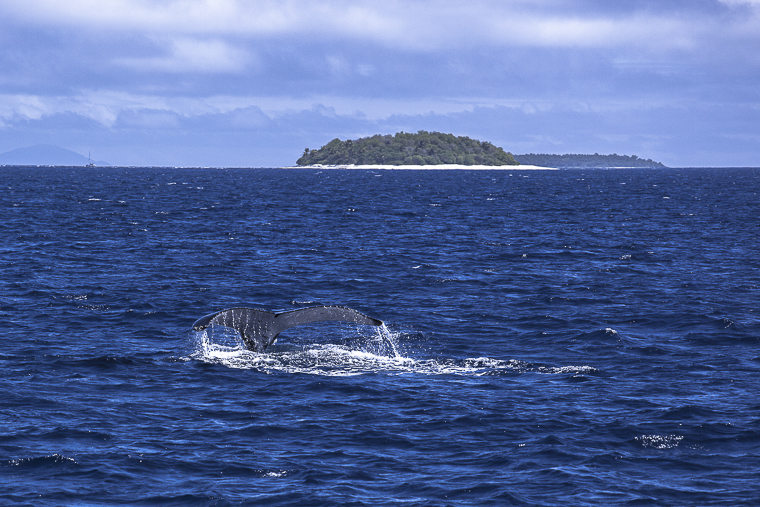 The archipelago of volcanic origin is made up of a myriad of islands covered with primary vegetation, where sharp black rocks alternate with beaches of coral sand. Inside the coral reef, the water is clear, shallow and its temperature is around 24 ° C. Its sometimes a little milky color varies from the deepest blue to the most sparkling turquoise. 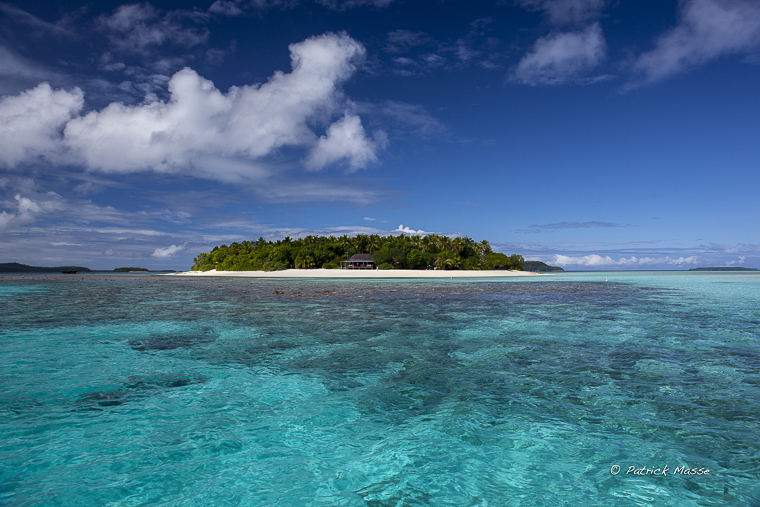 MEETING WITH CETACEANS: RULES TO RESPECT

It is outside the barrier, in the ocean, that we find the clearest waters and the best shooting conditions. It is therefore this place that we favored as a research area ... 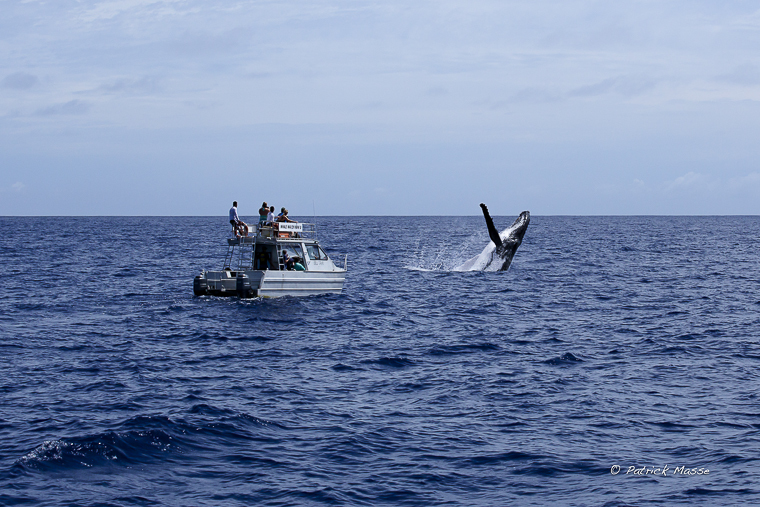 “Whale Watch Vava'u” is the service provider we have chosen to guide us in meeting these animals. Known for having been the pioneer of whale watching in Tonga, this operator has 2 aluminum boats, each motorized with 2 outboards of 100 or 150 HP. Local regulations only allow one boat at a time per group of whales, for a time limited to 1h30 and with a one-hour break between launches. These instructions appear to be limiting. They are in fact extremely favorable to operators who have several vessels. We were thus able to optimize research and benefit from the observation of the most interactive animals at the end of each boat's window. 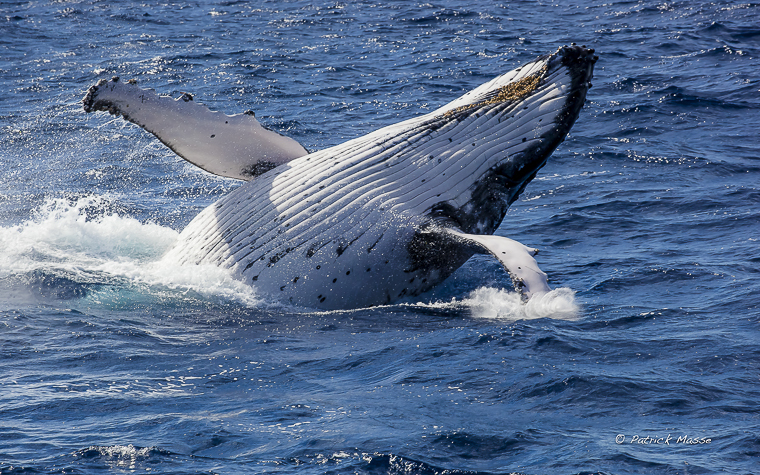 In Vava'u, the show is first on the water. You can spot whales from quite a distance thanks to their breath, but especially when they jump out of the water and fall heavily, creating sprays of water reaching several meters in height. It is the “breach” or “breaching” that we see several hundred meters away ... 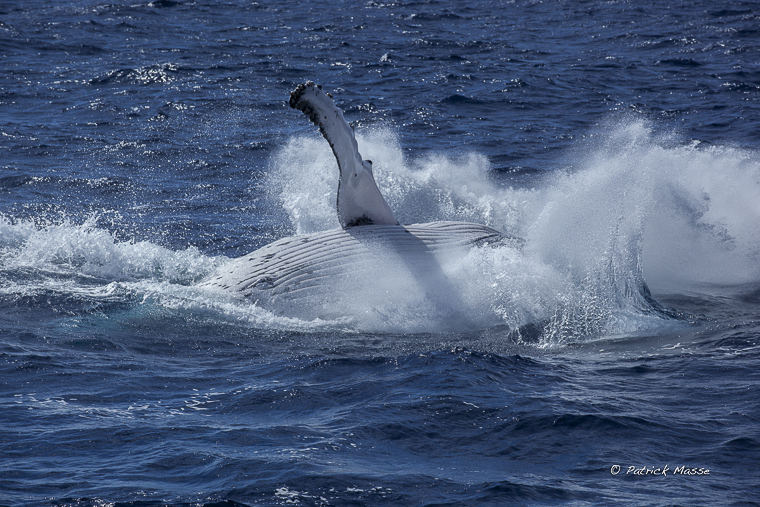 It is the race of a group of males who compete for the favors of a female again available and redouble their demonstrations of power to seduce her. This results in a lot of commotion in and on the water, jostling, jumps - breaching - tail flapping -, and other heads popping out - sky hoping. When animals weighing 40 tons play the one who will be the most powerful, it moves… That day, 6 males were in competition.

... some photos on the surface 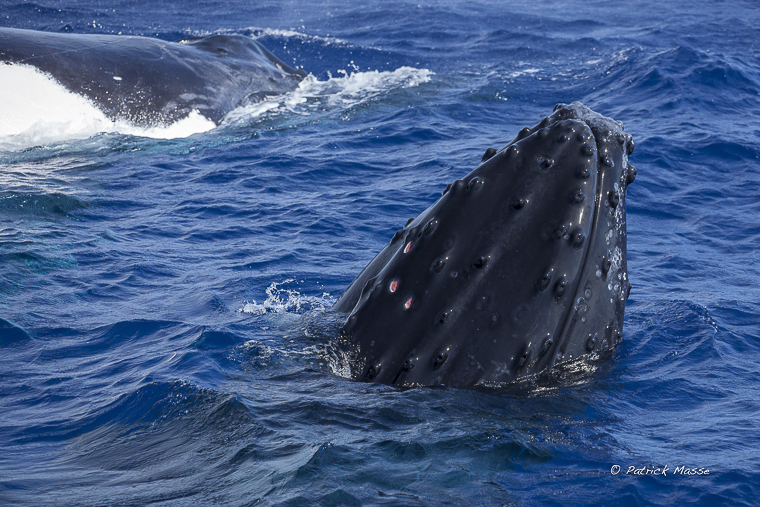 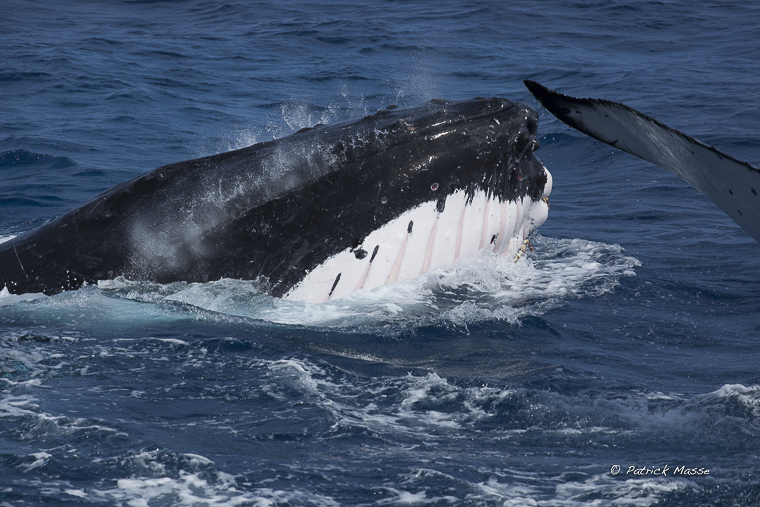 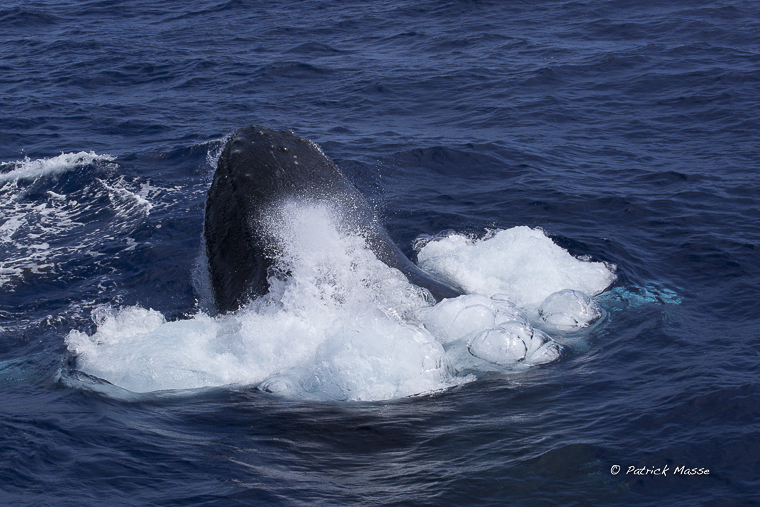 ... and some underwater photos 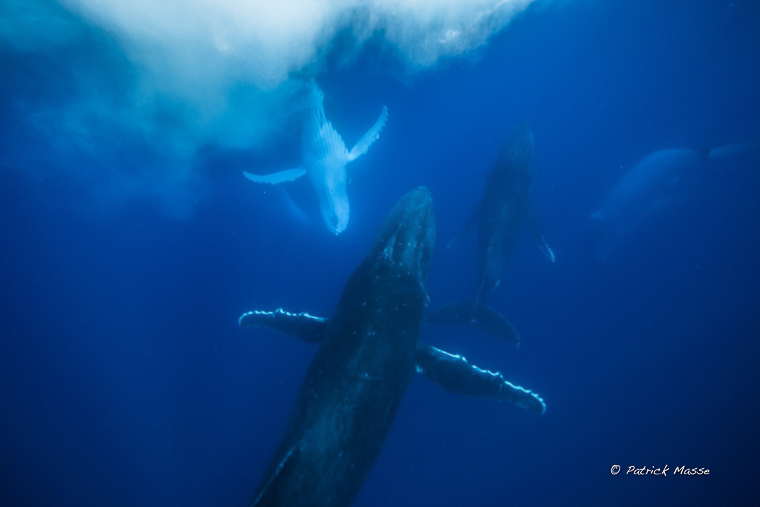 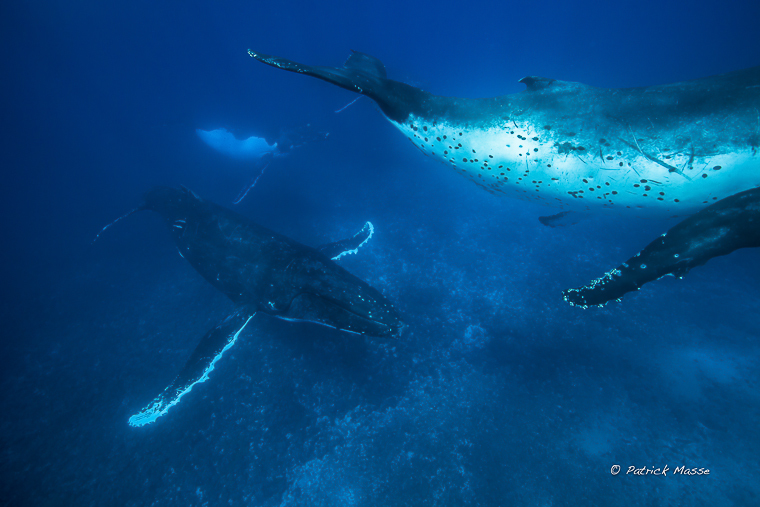 THE SEARCH OF MOTHERS AND SMALLERS

You should also look for a mother and her baby, preferably a calm and serene female. At the time of the expedition in late August, the newborns were between 2 and 6 weeks old and were just over 4-5 meters long, 3 times shorter than their 15-meter mothers. 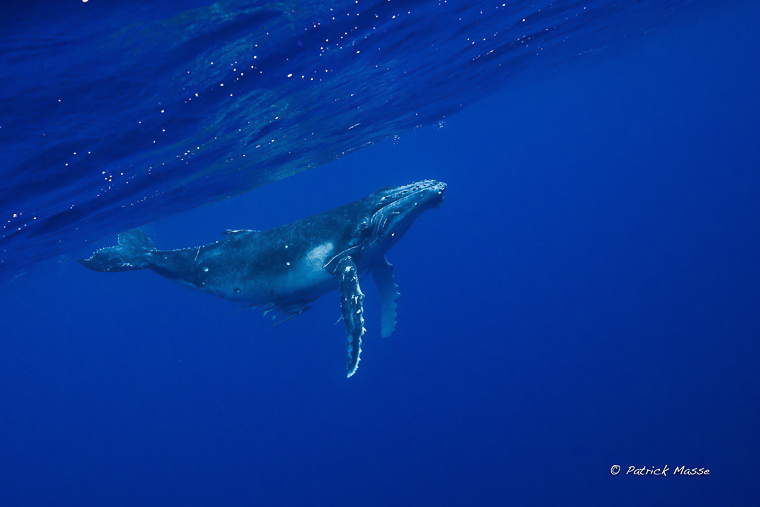 The calmest whales rest at a depth of about twenty meters where they snorkel for a dozen minutes. Meanwhile, the calf, which needs to breathe every 3 to 4 minutes, yo-yo between its mother and the surface. Launching must be done in the greatest calm and the approach to animals as slow and gentle as possible. If these precautions are respected and provided that the mother is confident, we can attend this spectacle, unforgettable. The opportunities for meetings, photos and videos are then maximum as evidenced by the following images.

ONE HOUR OF INTERACTION ...

To the rhythm of her own breathlessness, the mother goes up, accompanied by her baby, to resume her breathing on the surface. If she is still confident, she dives back almost immediately without moving and reposition herself vertically over the baby who continues to go back and forth. If it has been scalded by swimmers who are too noisy or too exuberant, it will move several hundred meters and the whole approach has to be redone. 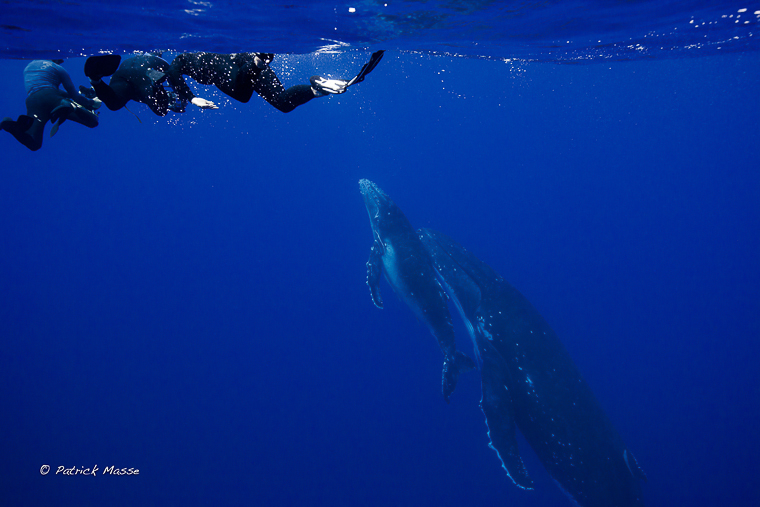 The discipline of the group and the respect for these animals allowed us to spend almost an hour with this mother and her baby without having to get back on the boat. Only the time limit provided for by the whale watch regulations put an end to the meeting… but it is necessary to respect the tranquility of these animals!

A BARRIER OF PROTECTIVE MALES

If you are having bad luck, you will come across a mom and her baby accompanied by an escort. The escort always feels the duty to protect the mother and her baby and to isolate them from any other suitor but also from any danger. She creates, in particular, curtains of bubbles between the coveted female and the swimmers. The bubbles are blown by the vents or generated by tail flapping on the surface, like here ...

THE LANGUOUS CALL OF MALES ...

Something else to see, or rather to hear, is the song of the “singers”, the singers, as the Anglo-Saxons call them. Only male whales sing. They position themselves vertically, head down, tail in the air, between two waters and begin a languid moan. We saw this sound sounding and heard its songs in the structure of the aluminum boat which made a sounding board. The sounds it emitted were powerful and melodic and we spent a few minutes in the water just for the pleasure of listening to this mastodon sing…

THE IMPORTANCE OF THE GUIDE

The quality of the encounters was greatly favored by our guide, Kirsty, daughter of Allan Bow who created Whale Watch Vava'u over 20 years ago. With 11 seasons dedicated to whales, Kirsty has acquired an intimate knowledge of the behavior of humpback whales. She gave us all of her experience and knowledge of how to approach animals gently. 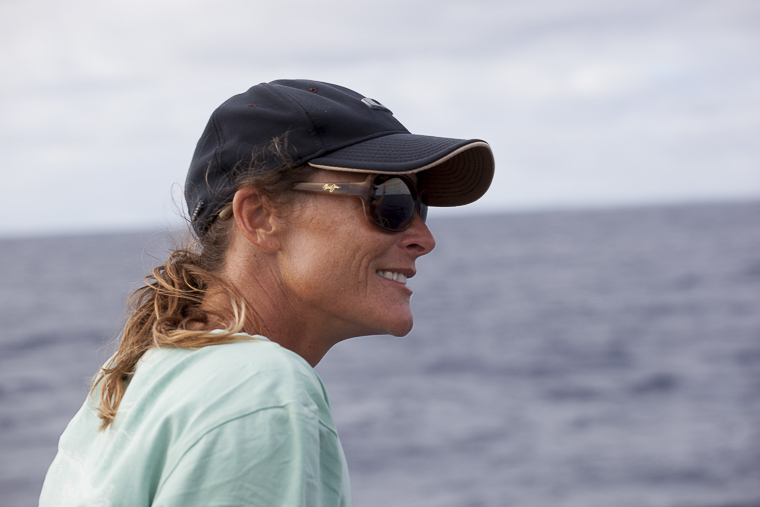 On Sunday, the Kingdom of Tonga falls asleep. The law prohibits all work there, so all tourist structures are stopped, including airlines. So no question of going sightseeing, especially as renting a car in Tonga is a headache ... unless your guide knows a couple of friends ready to accompany you in motorized kayaks, for a ride which I lets you discover some pictures ... magical, right?

OUR NEXT DATES WITH H2O TRAVEL 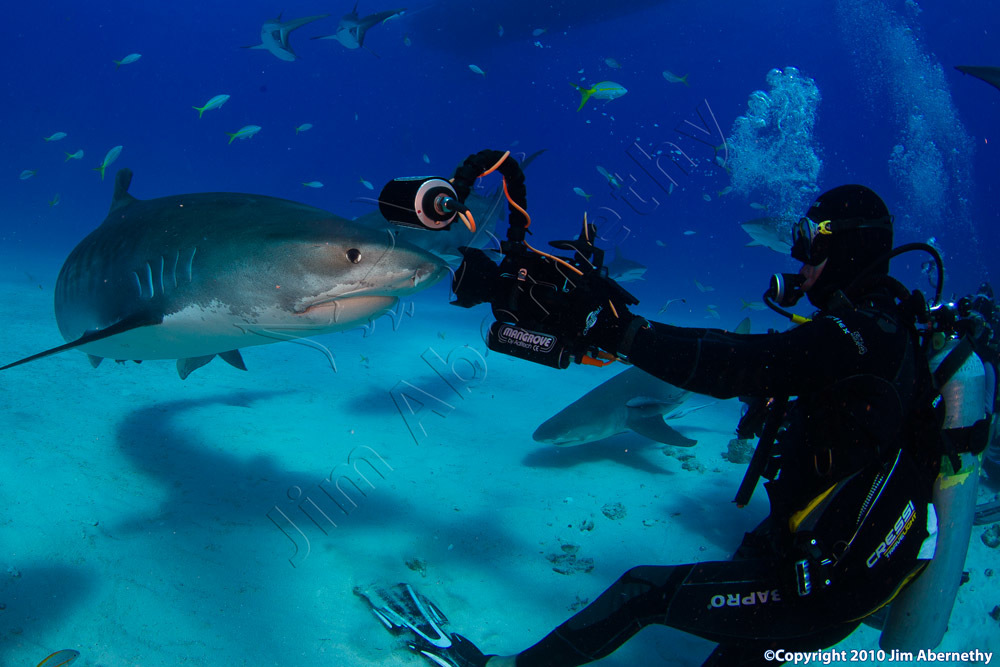 OMAN DIVING: CAP ON THE MUSANDAM IN DIBAH

NO STRESS TO THE BAHAMAS

DIVE IN THE EDEN GARDEN IN ANDAMAN SEA