Elphinstone: dives in the Red Sea

This saga of the most beautiful diving sites in the Egyptian Red Sea continues with the description of another emblematic place on the south coast of Egypt: Elphinstone. Its pelagic fauna, the beauty of its corals and its legendary arch are unforgettable… But the success of a beautiful dive must be earned and although Elphinstone is close to the coast, the site is exposed to violent currents… Focus on this reef mythical which has not finished to amaze divers.

Abu Hamra, in Egyptian, means fringing-type reef, that is, a reef that borders an emergent land and often ends in a reef flat. Rather narrow and recent, it is clearly distinguished from the barrier reef by its more modest size and the outcrop of the coral zone. Ephinstone is approximately 8 miles from the coast and parallel to it at the Equinoxe Hotel. Slightly further north are the reefs of Abu Dabbab, numbered 1 to 6, and, on the coast, Marsa Abu Dabbab where we used to dive with Dugongs.
Elphinstone is accessible from the coast by speed boat for the day, in daily dives. For the more distant islands, it is sometimes necessary to count one hour in semi-rigid. We can also dive on this site from more comfortable boats, like wooden boats of about twenty meters, always from the coast. It is also the last leg of the BDE (Brothers Island, Daedalus reef, Elphinstone) Abu Fendira, St John's reef and Fury Shoals cruises back to Port Galep. 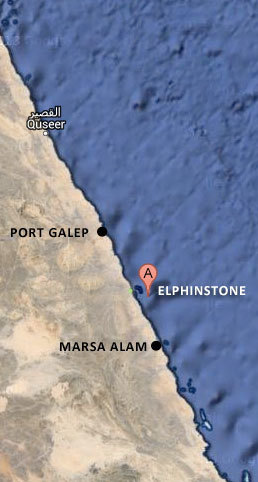 Thanks to its proximity to the coast, you can go diving in Elphinstone for the day - daily - or during a cruise. At the beginning of the year 2000, it was the center of interest of the cruises called at the time "South". Indeed, a few decades ago, only the north of the Egyptian coast was inhabited, so expeditions south from the coast required the more sophisticated logistics of cruises.
Today, partly due to the exodus of tourists to the south of the Egyptian coast where hotels have mushroomed, Elphinstone has become a significant economic source for local dive providers who charge extra dives.

The reef became known mainly in 2003-2006 by frequenting oceanic sharks (Carcharhinus longimanus), as well as for its deep arch. The key to this success: sharks and depths adorned with myriads of fish and soft corals. In addition, except in rare cases of bad weather, you can dive there all year round.

In the jargon of Egyptian sailors, Elphinstone is what is called a "Shaab Rurh", that is to say a long-shaped reef oriented north / south with drop offs which overhang the main level at the water's edge from east to Where is. On the north and south faces, there is a long coral plateau which falls towards the abyss. 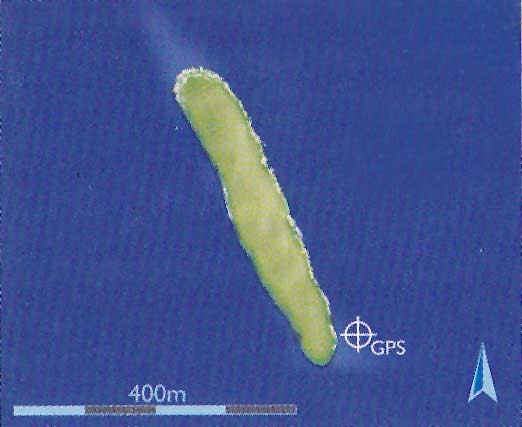 The northern tip of the Elphinstone reef is gradually moving towards 6 m below the surface, much like Brothers Island. It has access by zodiac and sometimes by cruise ship, if the weather is good and your captain is good enough to moor you over the submerged flat. Immersion must be absolutely negative, whatever the surface conditions. Indeed, the northern plateau is often confronted with currents that cut the plateau in two. If you miss your launch, this current will take you to the east or west and you will miss the plateau. 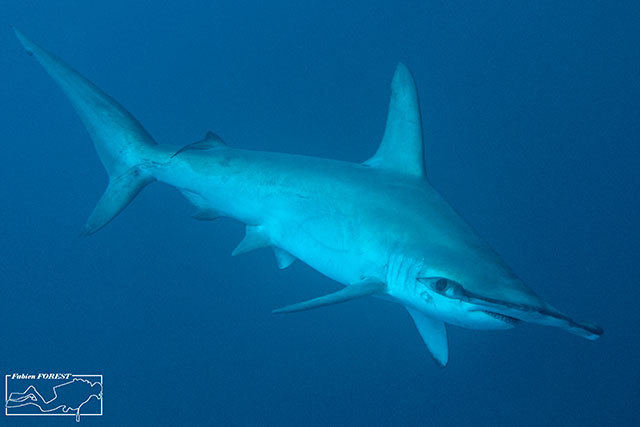 Thrown over the top of the board, you will be safe from the 25 m lower pulling current. Then, palm towards the north by sheltering you either on the left or on the right of the plateau. Towards 38 m, at the end of the plateau, you will find a "crack": a crack that cuts the bottom in half and literally detaches from the reef a "potato" that goes back to minus 35 m. Depending on your consumption and the current, pass this potato, and hover over the second plateau that you find below you unless 45 m. It measures substantially the same size as the first one. Be careful, it is in this area that we cross the pelagic: gray sharks, coral sharks and especially hammerhead sharks! You will be more likely to cross to the tip, but be careful about decompression and your gas consumption: mandatory half-turn 120 bars or the display of the first levels. Fly over the second plateau again, then the first to lower depths, before joining the reef drop on your right. Thus, you will end your drift diving along the reef wall. The last meters are beautiful! There is all the diversity and density of coral reefs in a literally magical blue, unheard of in all other dive sites. If the current is good, you will have the opportunity to return to the boat, otherwise exit parachute for a recovery by zodiac. 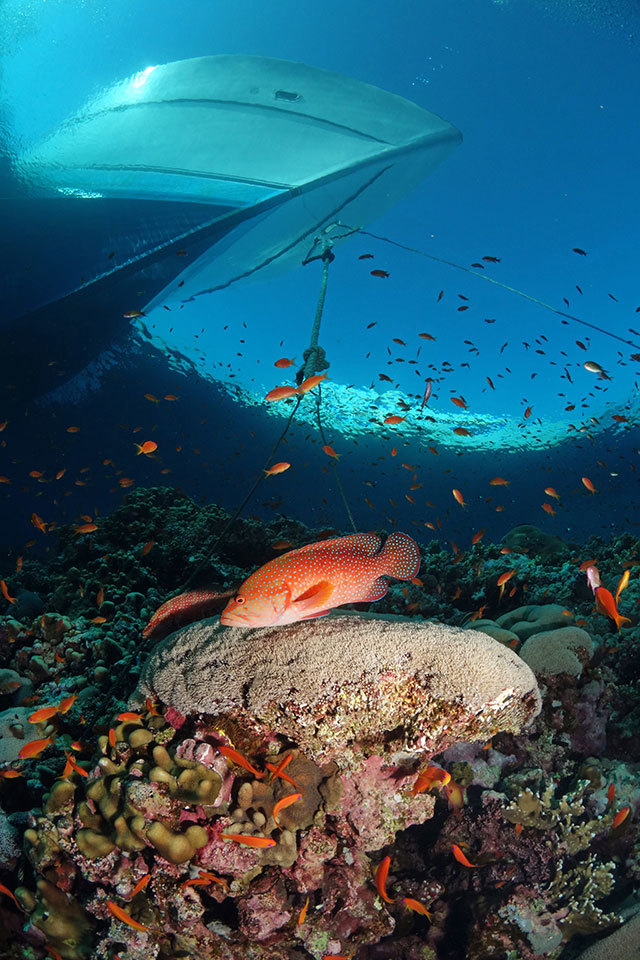 There are several ways to dive south of Elphinstone. We are not going to lie to each other, we currently only dive on the southern plateau of Elphinstone for its arch! There once lived a sizeable population of oceanic sharks that delighted novices looking for the thrill. Nowadays, fins plying the surface of the water are rarer or even non-existent, although 2014 saw the return of a community of longimanus to many offshore reefs. However, the plateau remains less sought after than before. 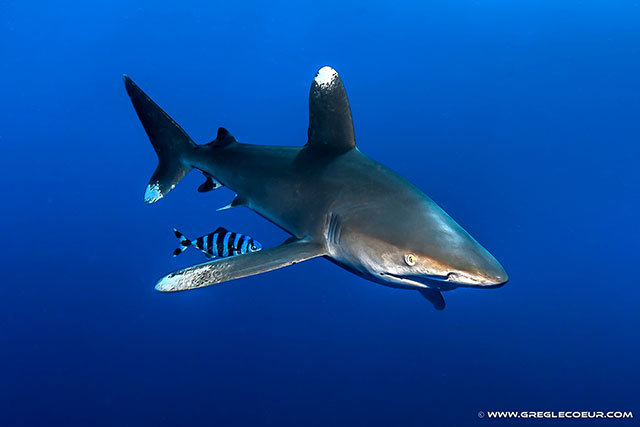 Immersion is simple: departure from the boat, walk on the point, return drop, then boat. Smaller and shallower than the northern plateau, the southern plateau hides a mysterious treasure beyond the depths authorized by Egyptian legislation… but is it real? In Egypt, the maximum air depth for recreational and sport diving is 40 m, regardless of the prerogatives of the federations recognized by the country. On the other hand, in the context of technical diving, with the appropriate gases and the standards of a federation recognized in the country, the procedures and depths applied follow the texts and prerogatives of the federation in question. To put it simply, you can go down and visit the arch legally if you leave the context of recreational and sport diving in the air.
The ark has earned Elphinstone some notoriety. Between myth and legend around her sarcophagus, she delights especially divers looking for nitrogen humor! It is at the end of the plateau between minus 48 m and minus 60 m. 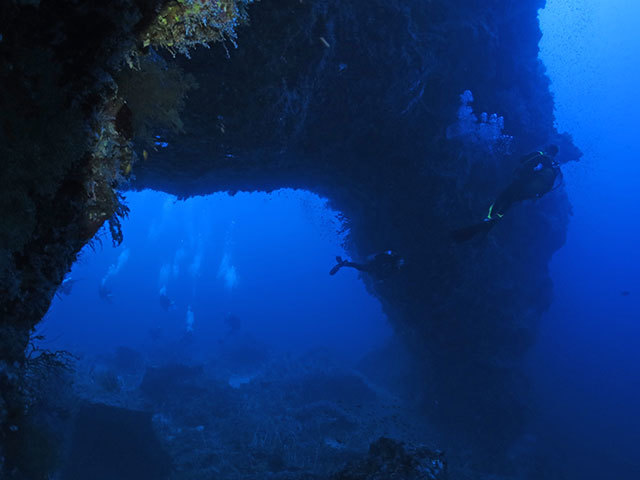 A blue that you only find there! Dense and rich, the northern plateau and the eastern drop off are teeming with life and corals. You will see pelagics to the north including tunas, jacks, barracudas, dolphins occasionally, gray sharks, corals, hammers and oceanic ones, if you are lucky and stray into the blue. Once or twice a year… a tiger shark! In 2009, a population of seven different tiger sharks colonized the reef. Some specialists say they are sedentary, others have seen them only during the season. The wall is also lined with gorgonians and alcyonnaires. The area of ​​less than 10 m is magnificent, a veritable living mosaic of colors and reef fish.

Cruising, departing from Safaga, Port Galep and Marsa alam on the South cruise circuits, the Golden Triangle (BDE) and Abu Fendira, St John's and Fury Shoal. Alternatively, either from Marsa Alam and Port Galep on rigid boats, or speedboats that depart from the coast from hotels and dive clubs.

A confirmed level 2 supervised by a guide, with around fifty dives, or PA40, or Advanced Open water diver, Deep Dive specialty. It is also absolutely necessary to know how to use your dive computer correctly, especially for landings and of course to know your equipment perfectly.

Difficulty of the dives

Diving in the north requires total autonomy, even being supervised by guides who know the site. It is necessary to know your equipment perfectly and it is wise to have a trusted partner. Three very important factors must be taken into account which are essential for the safety of the dive, its range in air, orientation and decompression. Beware of violent currents and pulling and descending, especially if you are trying a little excursion in the blue. It is sometimes a good idea to cancel dives for the safety of the divers in the event of bad weather conditions. A diving parachute with reel is advisable, in case you drift off, which is always possible given the depth.

We dive in Elphinstone all year round. The seasons are rather defined according to what one will be able to cross underwater. When there were still many oceanic sharks (Carcharhinus longimanus), the optimal period was October and November, but in recent years these have become increasingly rare. Hammerhead sharks can be seen at shallower depths in summer.

Steven Surina is a diving instructor in the Red Sea. In this capacity, for a decade, he has accompanied cruises along the Egyptian, Sudanese and Eritrean coasts. He worked in partnership with the Italian publishing house “Magenes Editoriale” on the project of a collection of dive sites all over the Egyptian Red Sea as an author and illustrator. He wrote a dissertation on the behavior of oceanic sharks in 2008 and distributed interactive booklets on the protection and preservation of sharks to Egyptian schools. 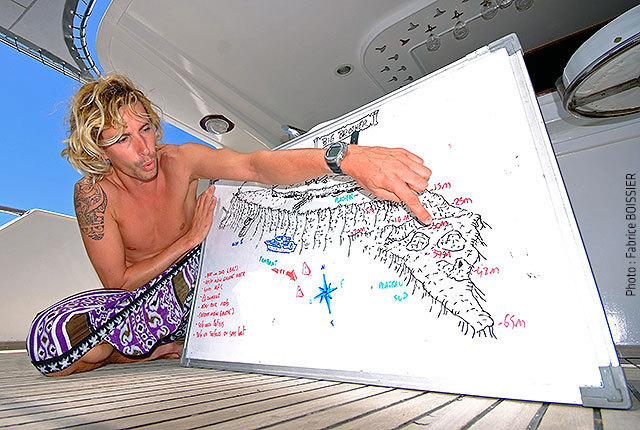 He participates with Dr Erich Ritter in a series of seminars. At the end of these months of work and joint experience with the Shark School Eric Ritter, he launched his own conferences in 2009. This is how he created, in 2010, Shark Education which offers shark diving trips whose objective is to help them get to know and understand them better.

Launch of the 2015 International Tour

Theory of decompression: truth or myth?

Listen, put yourself in the shoes of the federal club diver who was taught only that, scuba diving… and at 60m we told him and repeated that it was not dangerous….

And the best of the best when the federation does not want to accept international ISO nomes, because it considers that the federation is safer… .we are not laughing out loud? there anyway?