A cruise in the Red Sea entirely dedicated to wrecks! On the menu: the discovery of often emblematic sunken ships. But also others, more anonymous and modest, vestiges, remains of containers or forgotten barcasses: a targeted program which will make metal rhyme with feast. Is it still necessary to present the Red Sea? A destination blessed by the Gods because it is close to Europe and cheap. A sea offering a rich aquatic life which evolves in usually clear and warm waves. Certainly, security has raised questions, especially in Sinai. But, let us remember, on the other side of the Gulf of Suez, from El Gouna in the great south, calm reigns. The diving traveler has so far only been the victim of severe sunburn, stubborn seasickness or good gastro. The unlucky ones will have had all three at the same time, while the very very unlucky ones will add the bite of a lionfish or an involuntary caress to a branch of fire coral.

The Red Sea, this treacherous

Nothing really bad, and certainly not enough to forbid the pleasure of soaking his palms in such a privileged environment! However, going to Egypt to visit only the carcasses of ships poses a question a priori. Admittedly, the destination guarantees the wreck in quantity and diversity, the Red Sea having been and remaining a real danger for navigation. But with an ecosystem with a rich catalog of thousands of underwater species, endemic to variegated through the spectacular fins, a theme centered on the exploration of sunken ships seems somewhat unacceptable or reductive. Except with the wrecks of the Red Sea, the diver wins every time.

The wreck, a winning bet

Why ? It's simple. On the one hand, there are well-preserved remains, steeped in history and mostly accessible because they rest at reasonable depths, and on the other the discovery of a profusion of life since the wrecks serve as shelter for a multitude of species and that the oldest are often colonized by both flora and fauna. Moreover, the question of choosing between metal or reef does not really arise. In the Red Sea, a number of boats have sunk due to the presence of a reef, the direct cause of their loss… So between photogenic wrecks and quality atmospheres, happiness is not very far away. Let's add a zest of originality with the discovery of sea fortunes very little dived and here is the fact of embarking on this cruise “special wreck” fully justified.

In my Guide I trust

For such a stay to take the path to success, three factors must nevertheless be brought together. The first cannot be controlled, it is about the weather. The other two, yes: namely, a competent captain and a guide who knows his stuff. This is the case of Marc Van Espen. 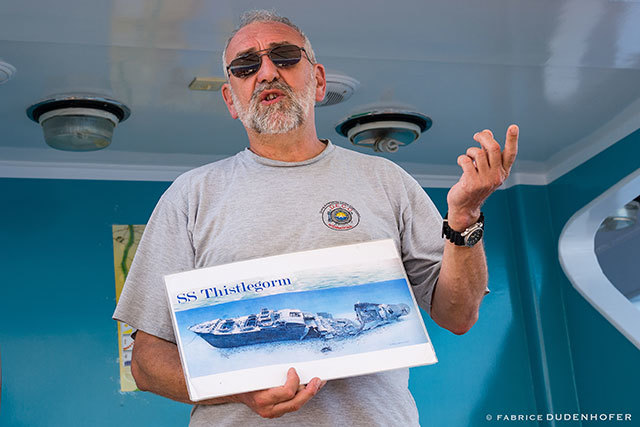 Modest, it will only reveal after a few beers that he was one of the first, in 1991, to surface in the cave Cosquer. But what matters to us is that this Belgian monitor has a bibliographical knowledge of the wrecks of the Red Sea. A good thousand dives allowed him to know the intimate secrets of a majority of them. Moreover, it has enough pedagogy to make interesting an exposition on the evolution of the steam propulsion through the centuries. And this, at the end of the day, after a sunrise at dawn and three dips on the counter, that's saying! Ultimate particularity, the strap passed around the neck of our man carries a pocket GPS. In the aircraft, the points of dozens of wrecks, from the most known to the most confidential.

It is also on one of these last that the classic check-dive takes place. In this case, an anonymous trawler lying in the bay of Hurghada. Placed on the bottom flat, this little wonder is intact apart from its wooden floor that finishes to disintegrate. 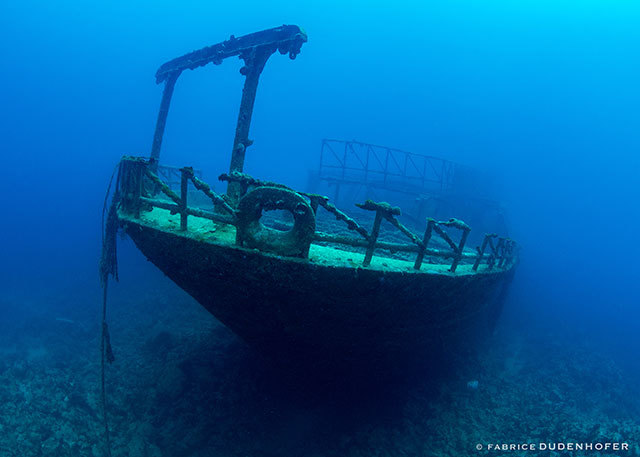 The hatch overlooking the engine room is obscured by a dense cloud of glass fish. Inevitably, some lion fish are ambushed nearby. At the base of the mast that rises to the surface, soft corals sway softly in a gentle current ... 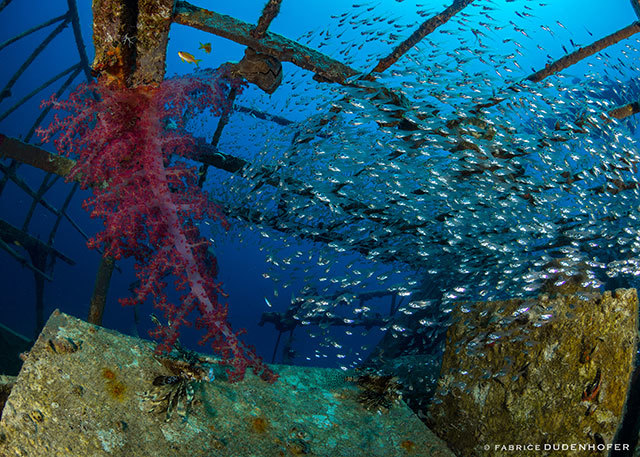 Then head to the nearby El Minya. This former deminer of Russian origin was sunk in February 1970 by Israeli fighter planes. Lying on its port side, its guns and anti-aircraft guns are still in place, while scattered ammunition lies on the sand.

It is clear that with El Minya, we are far from the reef atmosphere with its myriad tropical fish.

War will be discussed again during our visit to Thistlegorm. We no longer need to present this world famous cargo ship which, one fateful night in October 1941, became a veritable underwater military museum. Since then, thousands of divers have visited its holds, some of whom unfortunately do not hesitate to add their personal contribution to the ravages of time. Thus, between November 2015 and June 2016, one of the last two vehicles which had kept its steering wheel, “lost” it!

The rest of the itinerary will include other safe values. Shipwrecks with significant dimensions, some known as dives occasionally during traditional cruises. We are going to visit them one after the other. The English freighter Rosalie Moller, sunk only two days after the Thistlegorm, does. Kingston and Dunraven, two vapors of the late nineteenth century, made. Done also, the trifecta of the fortunes of sea resting at the foot of the same reef, that of Abu Nuhas. That is, in the chronological order in which the boats paid for it, Carnatic (1869), Giannis D (1980) and Chrisoula K (1981).

As for the underwater life, it will have been, as expected, most often abundant on our remains. In the image of these completely colonized containers, in Ras Mohammed, this jungle of soft corals that invaded the prow of Dunraven or of this Carnatic Davit, perhaps the most beautifully colonized in the world, just as this end There is also the vision of this anchor of Chrisoula K, which over time has literally merged with the reef. Not to mention the encounters: turtles nonchalantly passing over the Kingston Bridge, white moray eels concealed in the remains of the Emperor Frazer, a cruise ship or this other moray eel, much more balèze, crossed during the night exploration from the boat at Bluff Point.

Only regret, a strong wind on the last day that will prevent us from visiting the three steel monsters that rest in the large bay of Safaga: the ferries Salem Express, El Arish and El Kahfain. The weather is good, indeed, the only parameter that does not control.

Marc Van Espen organizes one or two “special wreck” itineraries per year for the Dune cruise line, generally between June and September. To find out the 2017 dates of the cruises hosted by Marc, get information directly from Dune, .

Fujairah eldorado of the macro:

Diving: heading to the Philippines

Thanks for the info, but I bought this book as soon as it came out, 😉