Home Cruises MANTA CRUISE: A SINGLE VISION OF DIVING IN MALDIVES
CruisesGreenland - with four paws to the iceberg!

MANTA CRUISE: A SINGLE VISION OF DIVING IN MALDIVES

After a little over 9 flying hours we land at Ibrahim Nasir International Airport. The time to spend immigration and collect your luggage and happiness can begin. The 2 Abyss guides are there and you cross the road to embark on a dhoni * that will take you aboard your cruise ship in less than 5 minutes.

THE ACCOMODATION OF THE MANTA CRUISE

We must admit that with its 33 meters long by 9 wide, the Manta Cruise is imposing. I immediately notice that the “dining room” is located outside the boat and is made up of a single table which offers 2 advantages, a milder temperature and immediate conviviality. As is often the case in the Maldives, the crew is largely made up of young Sri Lankans who are always smiling. The Manta can accommodate up to 18 passengers in 9 cabins, including 2 suites (more spacious, on the upper deck with four-poster king size double beds). The other cabins are equipped with single beds (4 of them offer the possibility of joining the 2 single beds to make a double bed), all equipped with a private bathroom and toilet, hot water, individual air conditioning.

Although we have all booked a cruise center, the guides do a real investigation to understand the motivations and expectations of each. Type of dives, expected animals ... everything goes. Rest assured, your guides are still guides and have not turned into commissioner Moulin… This is also one of the important points that Christophe Paul, diving instructor and “incidentally” Director of the Abyss agency in Geneva had claimed before our departure: “we do not calculate trips to the nearest kilometers in order to offer the lowest prices. My team has carte blanche to choose the routes and pick up the animals where they are. ” A little drifting here, mantas there with a hint of whale shark and our itinerary is subject to approval and then voted on by all.

Wake up at dawn to enjoy the first light of day, then departure aboard the diving-dhoni for the 1st dive of the day, after a quick snack consisting of tea, coffee and celophane cookies. Back on board, you can enjoy a hearty breakfast. Then bronzing, rest or video editing (wink) during the navigation time. Lunch follows, then preparation for a 2nd dive. The latter over and depending on the spots, the guides tell us if a night dive can be interesting or if it makes more sense to dive during the day. 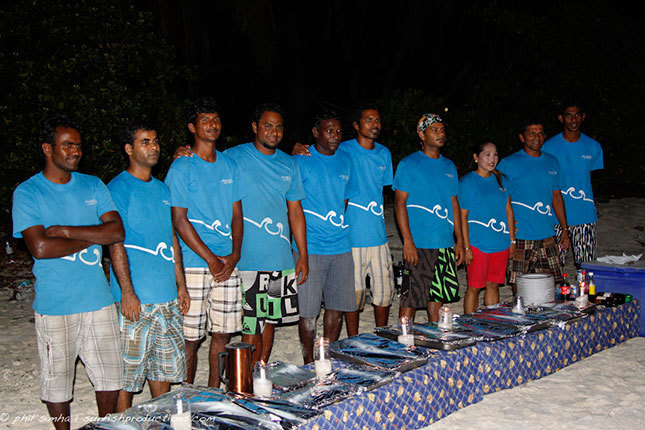 FOR THE LOVE OF MANTAS WITH GUY STEVENS

Installed since 7 years in the Maldives, the English marine biologist Guy Stevens dedicates his life to the study and the safeguarding of mantas rays. A job he leads underwater but also on the ground, putting all his energy to defend the giants. The specialist is present on some cruises, more specifically dedicated to mantas. But on all Abyss cruises, through the Abyss ID program, you can contribute to your work by sharing your observations and photos: "the best way to help us," he explains, "is to use the form which is on the site of Mantatrust, "by clicking here.

"One of the most important aspects of my work," he continues, "is to create a photographic identification catalog, increased at each new meeting. The mantas, like many marine species, are indeed all recognizable by the particular disposition of their black spots, which do not change during their lifetime. In the same way as the caudals of the whales, they are like the fingerprint of each animal. And this catalog allows not only to evaluate the population, but also to better know the distribution between males and females, the way animals migrate throughout the year, or to assess the longevity ... "From the beginning , says Guy, I was able to identify more than 2300 individuals, during more than 15000 observations. " 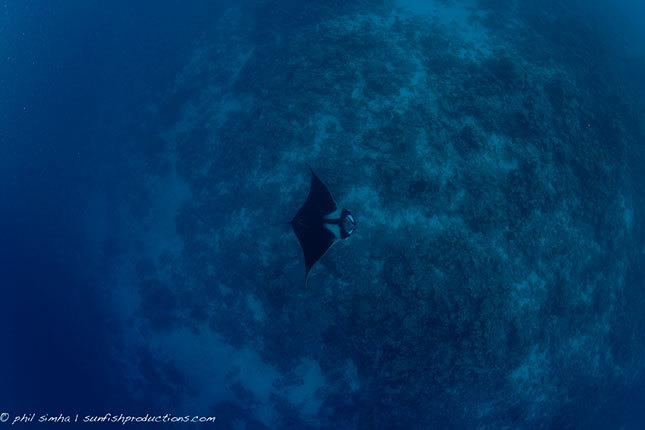 IN THE EYES OF MANTAS

Guy Stevens, it will be understood, has a passion for mantas. And for him, even if they are part of the fish family, like sharks, “there is a real contact that is established when you meet the gaze of a manta”. For him, they are closer in their behavior, their attitudes, their reproductive strategy, to large marine mammals such as baleen whales. Perhaps because, just like large cetaceans, they have large brains for their size, the largest in any family of fish. "When I look into the eye of a manta ray and wonder what she thinks I am," he concludes, "I have the distinct impression that she is asking the same question about me ! " 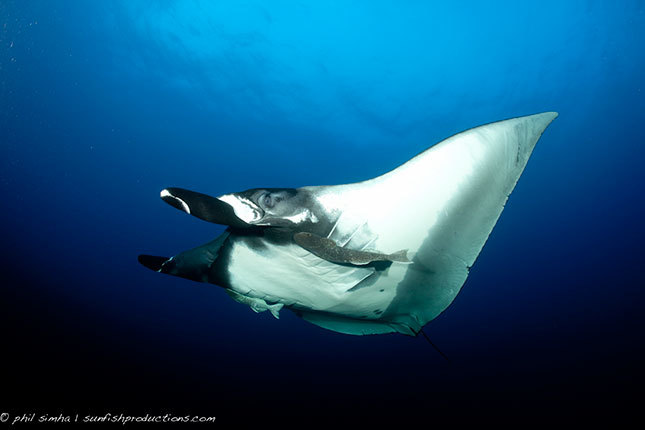 THE ROLE OF PRIMORDIAL CLEANING STATIONS

The cleaning stations, like that of Lankan Reef which Guy Stevens frequents assiduously, fill for mantas a double important role. They are of course the place, as their name indicates, where the rays come to be cleaned of their parasites by tiny wrasses that do not hesitate to enter the wide open mouth of the giants, to sneak into their gills for Feast on the tiny remains of their feasts but also countless parasites. The small wrasses also take care of cleaning the whole body of mantas, who can spend several hours a day being pampered. But the stations would also serve as a kind of meeting place, and would fulfill an important social role, particularly with regard to reproduction: every year, large numbers of males find themselves looking for females available ... For Guy Stevens, therefore, it is a privileged observatory, which allows him to record sometimes surprising concentrations of mantas.

And it's also thanks to his dives on Lankan that he was able to better know the reproductive cycles of mature females, during the country's South West Monsoon (The Maldives has two monsoons / seasons each year) "And the results, explains- he, have been very instructive, and have shown that these animals have a fertility rate much lower than what I had first supposed. "A priori indeed, a mature female, ie at least fifteen years old, does not breed on average every five years! After a gestation period of 13 months, only one child is born. It is easy to understand why threats to mantas can quickly have dramatic consequences for a population. And as the biologist reminds us, "very few areas where mantas are found are protected areas. And to the extent that they also evolve outside territorial waters, local protection measures will not be enough to save them. " 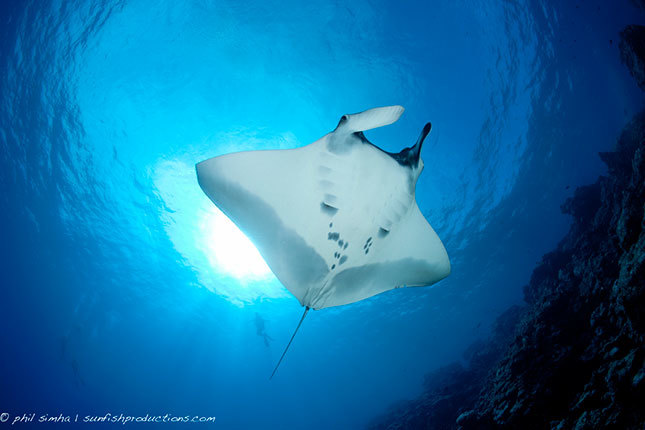 Abyss does not offer one but Maldives cruises, with several itineraries adapted both to the budget but also to the time available to the divers. And of course, the “extremes” are the most tempting. The Great South route, offered from mid-January to mid-April over ten days, is the magic of the passes, oceanic mantas, sometimes tiger sharks, in an area that also has the advantage of not to have been affected by the bleaching of the end of the 90s: and very few boats venturing into the region, we benefit from almost total isolation. “It is also, explains Christophe Paul, the boss of Abyss, the opportunity to discover and explore with guides rarely dived sites.” And even if there is not necessarily more reef life and pelagics than in classic cruises, diving alone in almost virgin sites changes everything! For this type of cruise, customers are asked to have a minimum of a hundred dives. There are still places left for a departure on January 20, with, icing on the cake, Guy Stevens on board. 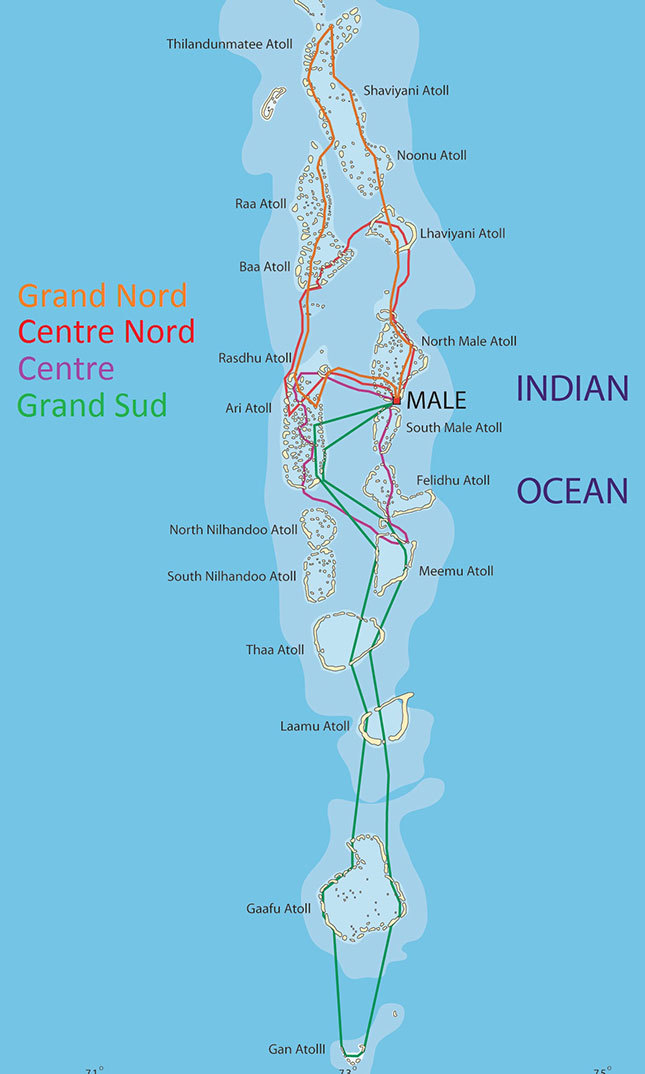 As for the cruises Grand Nord, organized in November on 15 days, "it is the Maldives there 30 years". The sense of isolation is even stronger than in the South, the mantas concentrations on some spots can be exceptional, and it is the undisputed kingdom of soft corals. There too, no bleaching on the coral reefs, a life abounding, and classic reef and pelagic species is added a host of "little beasts" that can delight the crazy macro. As in the South, cruises are either up or down: the journey in the other direction is by plane (on a regular line); by not having a loop to do, we can be more flexible in the organization and adapt more easily to animal encounters. We sail in the early hours of the day, night navigation is prohibited and hazardous in the middle of the multitude of atolls.

THE CROCODILES OF BANCO CHINCHORRO

By continuing your navigation, you accept the use of cookies to improve the functioning of our site and the user experience.Ok