A former pirate hideout in the 14th century, barely a mile off the Catalan coast, the Medes Islands archipelago has become in 20 one of the largest underwater reserves in the western Mediterranean. Between groupers, moons, and rays eagles, but also small wildlife and exceptional biodiversity, the natural park keeps its promises!

Facing the port of the seaside resort of l'Estartit on the Catalan coast in Spain, the small archipelago made up of seven islets was in turn colonized by Greek civilizations, haunt of pirates in the 1930th century, military refuge during the French revolution and under Napoleon to be finally abandoned of any human presence in the XNUMXs. The marine riches of the archipelago were long exploited by man. Today the largest of the islands has only one building, the Meda Gran lighthouse. And when the sun rises above, the Mediterranean offers its most beautiful colors, its calm expanse inviting all the underwater discoveries ...

ARCHIPEL PROTECTED FOR MORE THAN 20 YEARS

In 1990 the islands are placed under protection by the Spanish authorities to thus create the nature reserve of the Medes Islands, where all the activities are rigorously restricted and controlled. At the time of the "Grenelle of the sea" and other sensitizations or calls to action, scientists, oceanographers and associations of protection, the man has no alternative but to become aware that it is essential to live in better intelligence and respect with the sea, that its resources are not unlimited. Today, man loots without thinking the natural riches of the seas and oceans, relentlessly, leaving the most endangered species no time to reproduce; and thus sacrificing the exceptional biodiversity of the world's seas, which are indispensable resources for future generations. The survival of humanity will most certainly depend on the oceans, it is not too late to reiterate once again the need to create protected marine natural spaces.

BECAME A MODEL OF SANCTUARY UNDERWATER

That of the Medes Islands is a fine example of success and I think I can say that it represents one of the most important submarine reserves in the western Mediterranean. A real sanctuary! The richness of the fauna and flora in this place is quite exceptional! For almost fifteen years now, I have had the chance and the privilege of exploring the various dive sites offered by the Medes islets, with the same passion, the same enthusiasm. Over the years and after several hundred dives on the reserve, I still discover these sensations that have remained intact, this impression of discovery, of diving on a unique site in the Mediterranean ... 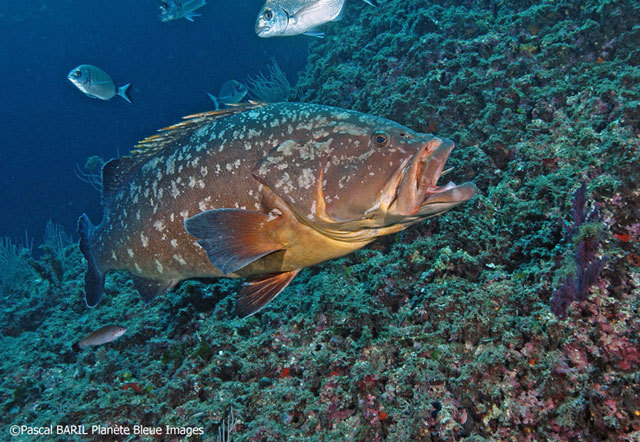 More than fifteen sites are proposed on the Medes Islands Reserve, and most are accessible to all levels of diving. No need to probe the depths at all costs, the majority of fauna and flora to observe is ubiquitous between -5 and -30 meters deep. Groupers, present in large numbers on the reserve will accompany you on every dive. The presence of eagle rays, barracudas, tunas, schools of dentis is common ...

Difficult to find a place in the Mediterranean that has as much variety and quantity of underwater life at such a shallow depth. A magnificent dive in the zone 25 meters in the company of groupers very little fierce. Regularly you can observe the passage of eagle rays (I was lucky to observe this year a group of 7 rays) Also barracudas bench, and perhaps the presence of a moon fish! 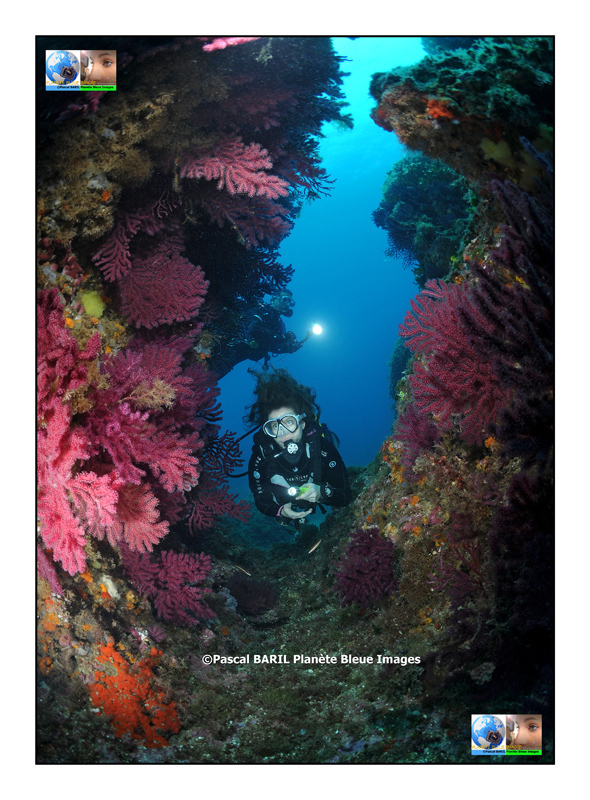 Still in the 25-meter zone and a gorgonian drop-off that descends to 35 meters. Always keep an eye in the direction of the blue so as not to miss the passage of the eagle rays ... 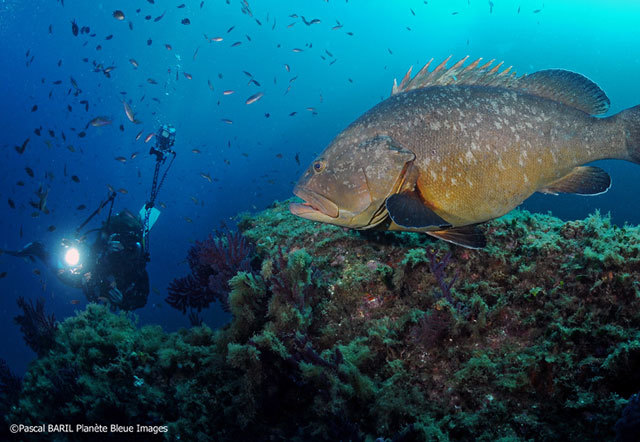 One of the most popular dives of the Medes. Island located south of the archipelago called "triangle of the Tascons". An immersion without difficulty on a sheltered site where it is possible to dive by strong current and high wind. Fauna and flora very abundant. 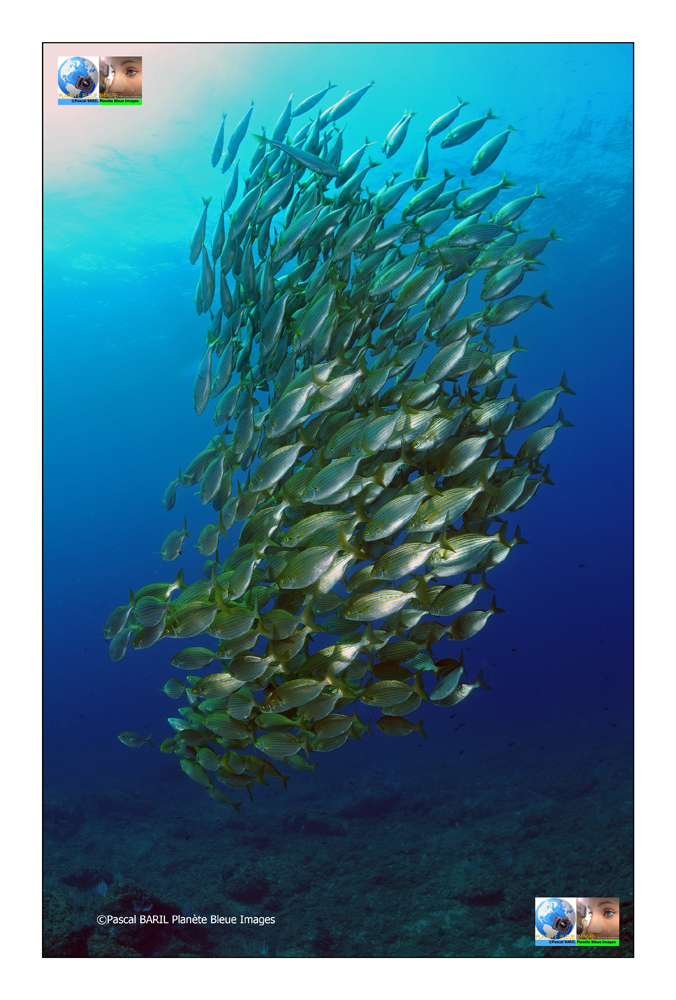 DOFI AND COVA OF VACA:

The Medes Islands offer the particularity of diving in underwater caves. Very easy to access and shallow. The Dofi cave, the entrance is located - 5 meters to come out - 15 meters with a statue of a dolphin sealed in the rock. The cave is very wide and very high. Inside, many schools of sars and corbs, mostelles and large groupers. On the north side, it is possible to take a tunnel which is located at -15 meters to exit on the south side in the - 25 meter zone. Lamp or headlight compulsory, guaranteed effect! 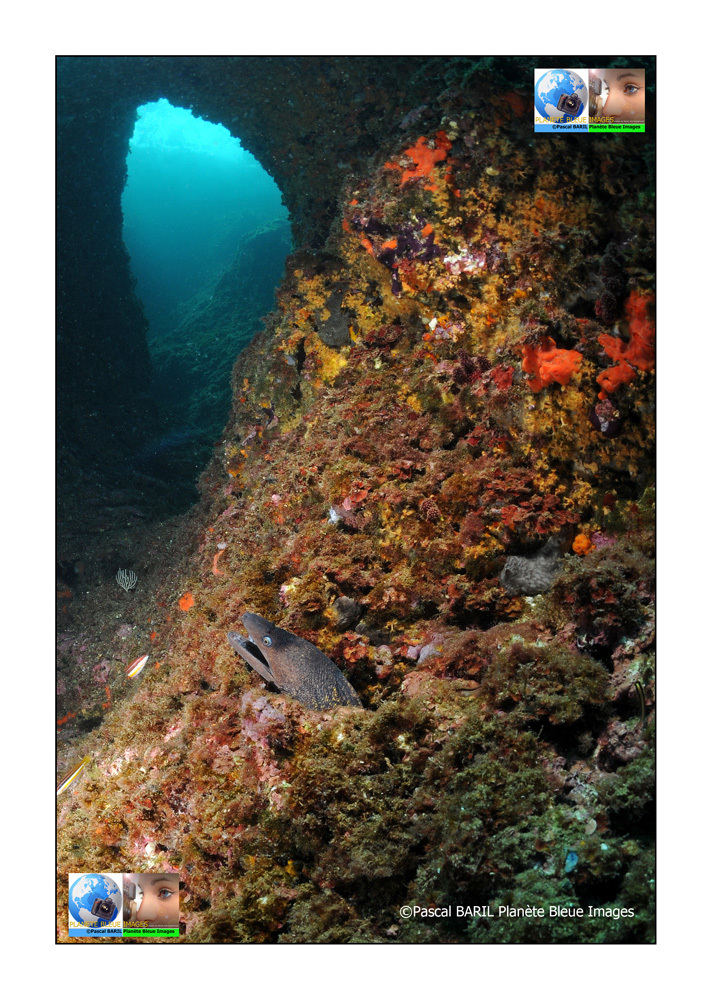 DIVING DIRECTIONS FOR USE

The El Rei del Mar center in L'Estartit offers 3 day trips on the reserve, in the morning at 9h and 11h, in the afternoon at 15h, and an afternoon outing on the coast for training and baptisms. The islands are about 10 minutes of navigation. The dives are self-supervised according to the levels or supervised by the instructors of the center. Levels I or open water must be accompanied by a monitor. The maximum depth allowed is 40 meters, but there is no interest in lowering anyway, the majority of wildlife to observe is present in the zone of -25 meters! You dive on a protected reserve, it is thus imperative to respect the norms of the natural park: essential to know how to manage perfectly its buoyancy not to deteriorate the funds, prohibits to touch or to feed the animals. 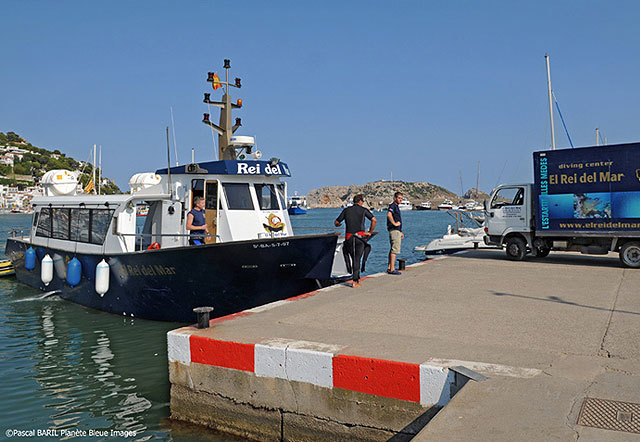 In order to preserve the marine environment of the Medes reserve, a quota of dives per day has been imposed by the authorities, so it is strongly recommended to reserve your places beforehand because they are limited.
Best season to dive: from June to September, for the temperature of the water but also for the abundance of wildlife during this season. In June it is not uncommon to observe moon fish (a specimen of more than 2 meters was seen on the islands) and maybe some dolphins on the surface. In summer, the water temperature is about 25 ° with a visibility of 25 / 30 meters.
Possibility of Nitrox on request and rental of scooters underwater.
PADI training, from open water to instructor.
Discover scuba diving (Baptism pool + sea)
A team of ten monitors are at your service.

Located in the Panorama hotel in l'Estartit, the PADI 5 * Instructor Development Center is open all year round, it has existed since 1989. It is managed by Carmen and Jordi, who speak French very well, as do the instructors. and the clientele is predominantly French. From the hotel your equipment is brought by truck to the boats. When returning from diving your equipment is stored in large closed cabinets. The center provides cabins for divers which automatically rinse and dry the wetsuits. So you don't have to worry about your hardware. In the hotel, a shop selling diving equipment and accessories, t-shirts, etc. You can also rent all the necessary equipment. 12 and 15 liter units din or caliper. Groups of 10 divers or more: ask Carmen for prices. 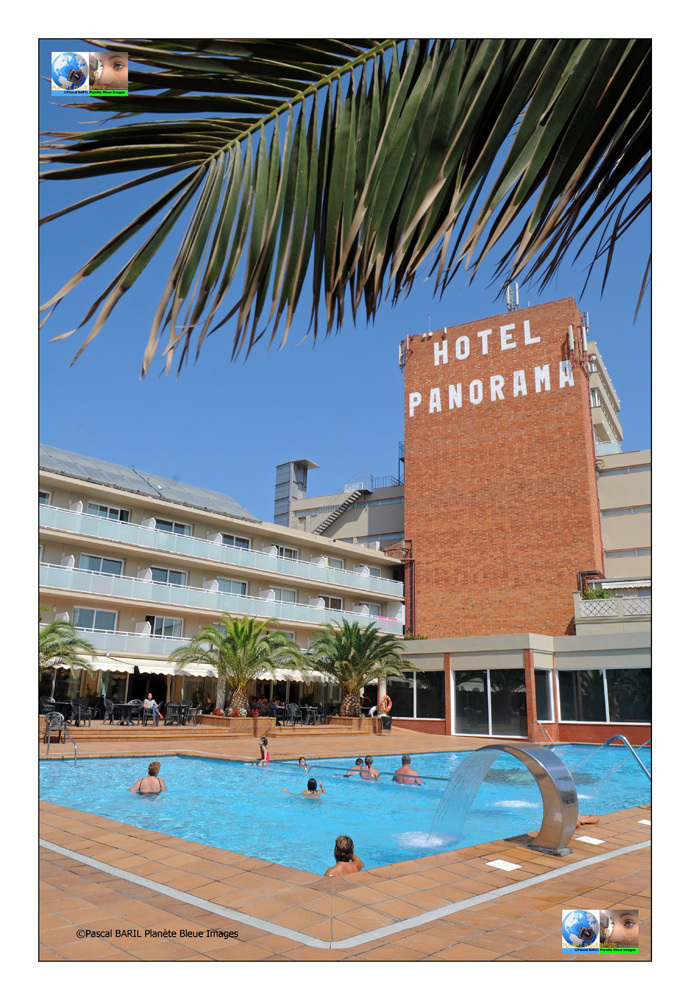 Two new boats: The Rei del Mar and The Dos Martas of 15 meters each, with a maximum capacity of 40 divers per boat. The boats are equipped with hydraulic lift to raise the divers. The boats are partly covered with toilets on board. Two security annexes (Zodiac). VHF radio, pharmacy, first aid equipment and oxygen on board. (Hyperbaric chamber in Palamos, hospital center with open hyperbaric doctor 24 / 24h). 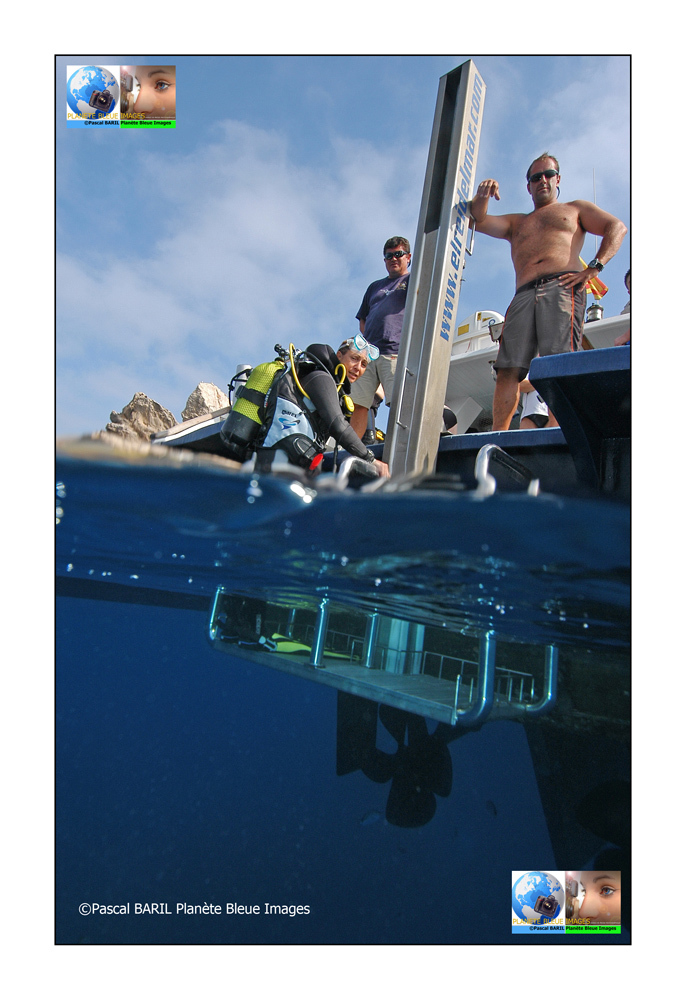 Hotel Panorama 3 *: 153 rooms with air conditioning, bathroom and terrace. The hotel has a large outdoor pool with solarium and bar and an indoor pool. Games room, internet. Jacuzzi, sauna and fitness room. A large restaurant with buffet. Animations in season.

The seaside resort of L'Estartit is located less than 100 km from the French border via the A7 motorway then La Jonquera, the Spanish motorway, exit 5 Girona towards Torroella de Montgri. 1 hour from Perpignan airport, 1h30 from Barcelona airport and barely 1 hour from Girona airport. By train, Girona station and shuttles to l'Estartit. L'Estartit is located on the Catalan coast in Spain. This fishing port, which has become a seaside resort, has not been too disfigured by anarchic constructions like other resorts on the Costa Brava. Large sandy beaches offer all water sports: sailing, jet skiing, water skiing, pedalo, etc. Possibility of flying over the islands in a microlight or plane, to practice horse riding or golf. Boat trip to discover coves inaccessible by the coast. Barcelona is 130 km away, Figueras and its famous Dali Museum 35 km away. To see the medieval village of Peretallada, the town of Pals, famous for its pottery, the Greco-Roman ruins of Empuries. And the very pretty village of Cadaques.

DIVING FROM TANZANIA TO ZANZIBAR ISLANDS