Home banner Mozambique, the mecca of sharks.
bannerGreenland - with four paws to the iceberg!News

You are like us, passionate about underwater photography and sharks, but not only ... We tell you everything here about our experience at Ponta de Ouro, in the extreme south of Mozambique, to immerse you in this wonderful playground.

Following our anticipated spring cleaning at Plongimage at the Salon de la Plongée, we swapped our G1xMK2 cannon and Meikon casing for a Sony RX100M5 inside the famous red Isotta brand and Orion headlamps. Equipped to capture everything, all we needed was to jump into the water ... But where ???

Some friends were heading to Mozambique and after some deterrents we were convinced ... to be honest, we are not hard to convince trip level. When we search a little, this country that was not in our travel bucket list became obvious.

Terrestrial and marine nature reserves, breathtaking landscapes and a population with a communicative smile. A country where life simply lives ... 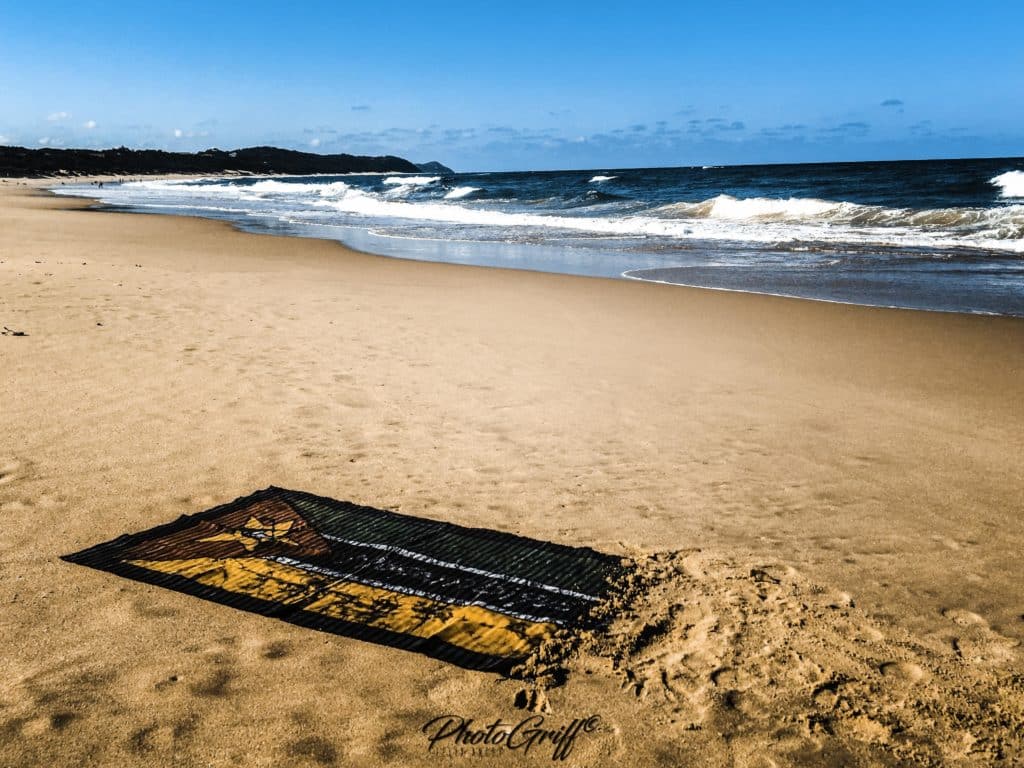 A few weeks later, with great expectations, we landed in Ponta de Ouro, not far from South Africa. Ponta is a warm village with dirt roads where quad and 4 × 4 mix, where colorful stalls displaying fruits and vegetables lead you to its beach, which ends in the horizon.

But Ponta is also and above all a destination recognized worldwide as one of the 10 best shark dives. 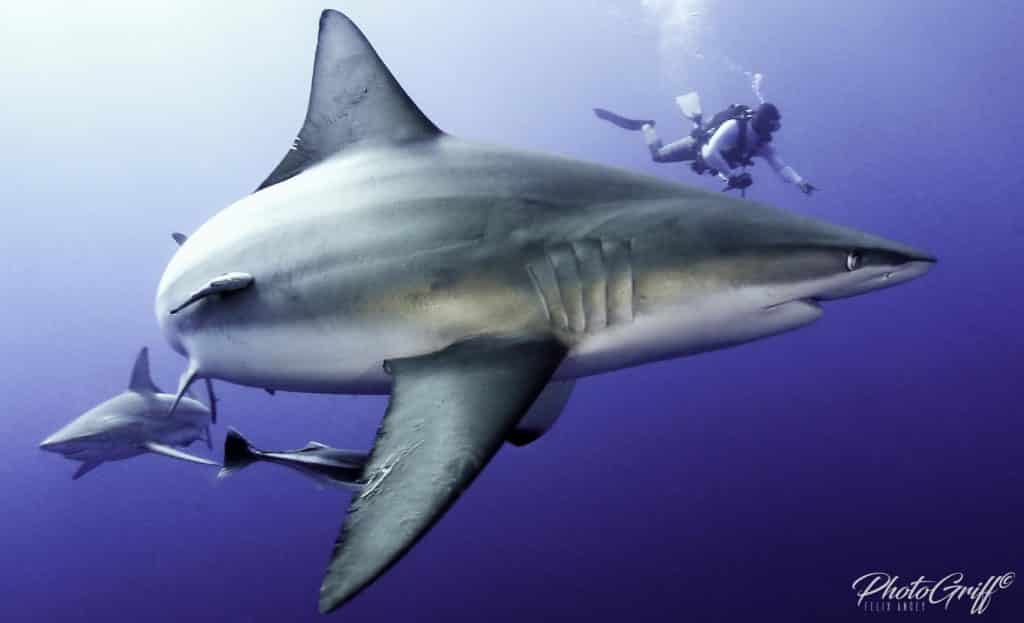 Back to Basics Adventures was the center with which we would discover the submerged treasures of the Mozambican waters. Jenny and Rupper are the managers, but mostly experienced divers of over 15 years in the area. Rupper is the man whispering to the gills of the sharks while Jenny is obsessed with the macro. From small to always smaller ... Moreover impossible to see her remove her macro lens, even on a dive pelagic oriented.

Go diving in Ponta is an experience already out of the water.

On board the club tractor, we were now the kings of the track. Arrived at our zodiac, it was then the ocean that dictated the rest, feet well in our straps.

Doodles, the reef chosen for our check-dive, was already surprisingly alive. Perfect for handling photo equipment. Beautiful leopard morays, huge stingrays, a few octopuses sneaking into the crevices and huge potato groupers on patrol. The tiny ones were also there… Nudibranchs of all kinds, cleaning shrimps, galathea, etc. 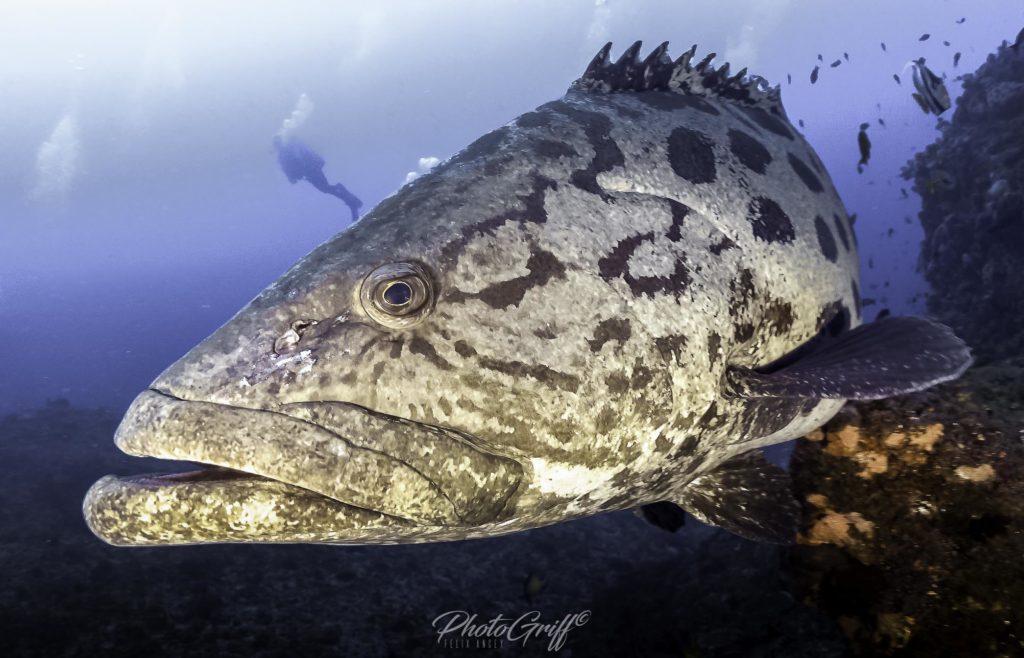 But we still have bitter memories of this premiere, which once again showed us that nothing had been decided in advance with this new configuration. We had to carefully analyze the images of this exit to understand the reasons for this complete flop. The change of brand and therefore of the menu tree structure not yet mastered, our beginnings with lighting and therefore a more imposing set up, add to that an innocuous but decisive stupidity of not having tightened the arms of the platinum, and here is a beautiful failed session ... But leaving before us an unparalleled margin of progress.

The majority of the following dives took place at the Pinnacles site, the local mecca of super predators so coveted by divers.

After about thirty minutes of navigation, GPS point reached, we were there. Tilt made and camera in position, all that was missing was the “big guy” in sight. And it didn't take long ... As soon as we got to the bottom, sometimes even before, we were already amazed by a school of eagle rays or hammers.

On the substrate, there was something for everyone: gobies, nudis, snappers ... 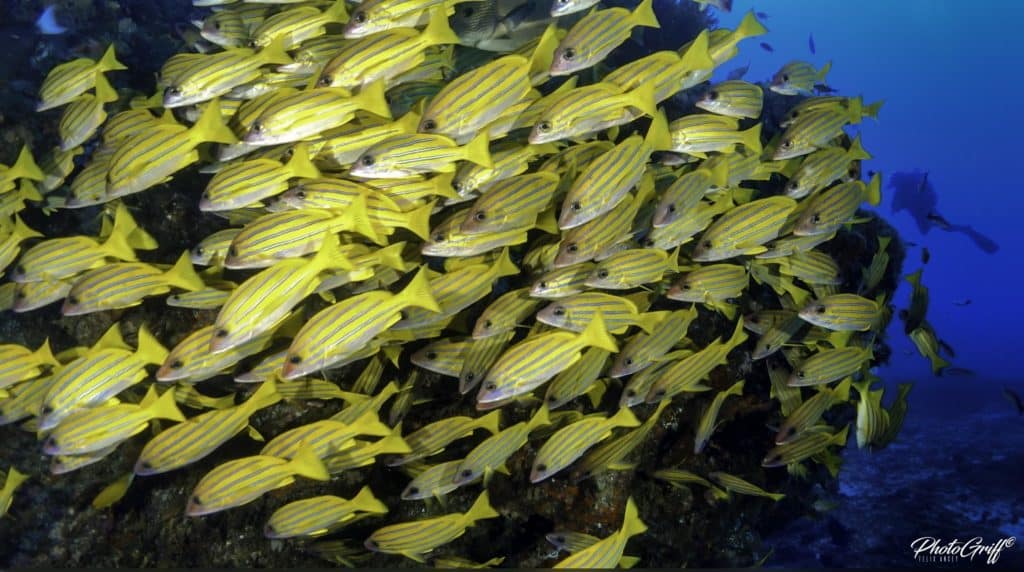 And the biggest, grouper potatoes, some stingrays excessive ... Then appeared the reason for our arrival to the African soil, the bulldog shark. But this one was wanted ... The distance ... Imposed respect.

The group respected the briefing to the letter and here we are drifting in the blue reducing the depth over the minutes submerged. Meanwhile, other species and individuals join the parade. The circle of their rotation was tightening and, with our wide-angle at arm's length, we seize every moment to immortalize the interaction that followed in our memory cards.

The dives multiplied and everything was identically different during the 60 minutes following the launch.

On Pinnacles, we have seen no less than 4 species of sharks: the bulldog, the hammer, the shell or albimarginatus. 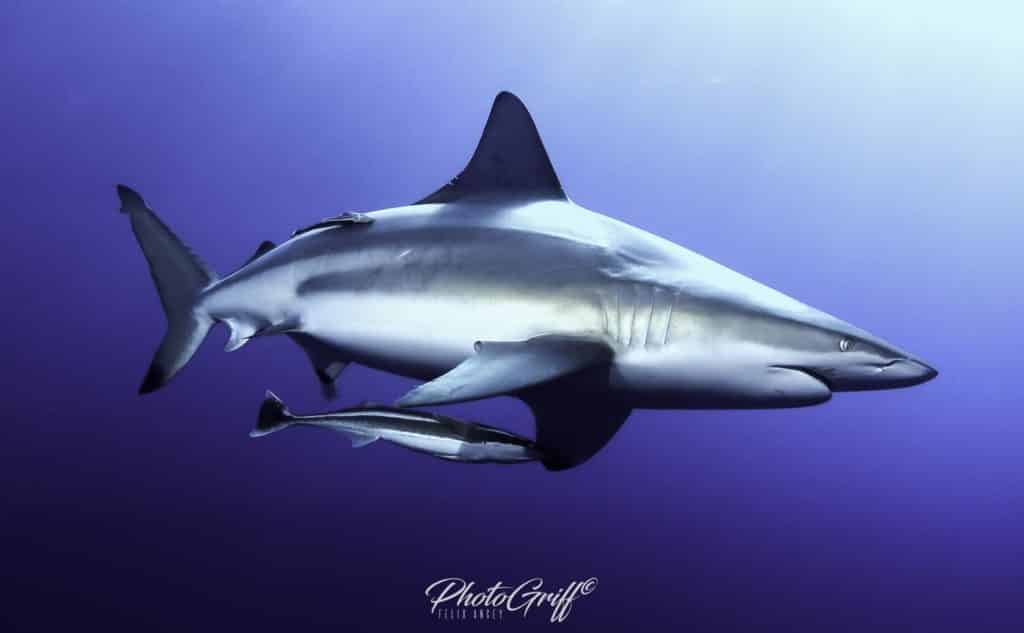 We keep a preference for the plank, more lively and more agile, sometimes coming up to graze our portholes. But accompanied by her armada of remora, this female Bulldog, nicknamed "Big Mama", did not leave us less open-mouthed. Just like this young male hammer with his teen curiosity.

All that was missing was the tiger running away from our back to the list, comforted all the same by our first marlin.

Floating on the surface, we could continue to watch, safely, our friends ailerons a few meters lower, waiting to be on board again. 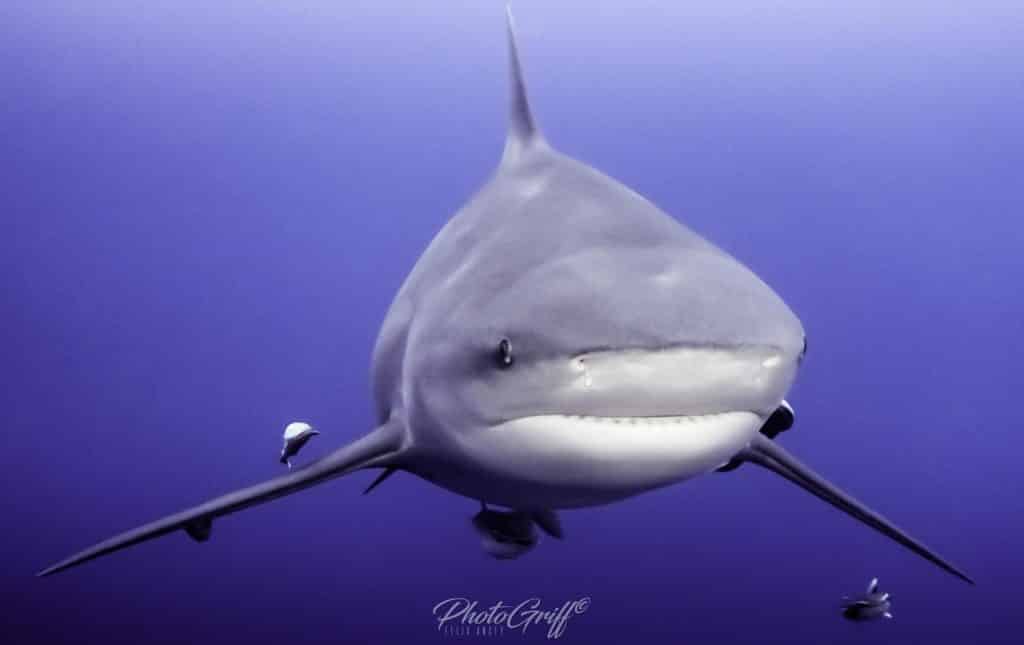 On rough sea days, Pinnacles being inappropriate, we took to the water on Atlantis, a landscape of rare beauty that will amaze many. But its splendor is paid for by its average depth of 40 meters, which following the instructions of the briefing, forced us to go back up after about fifteen minutes to contemplate the bottom ... And the minutes flew too fast as for the magic of the place. This one populated with gigantic black coral with varied colors, Spanish dancers of impressive sizes and a splendid species of echinoderm which was still unknown to us, called sea apple.

I was surprised that a sea cucumber was so beautiful. 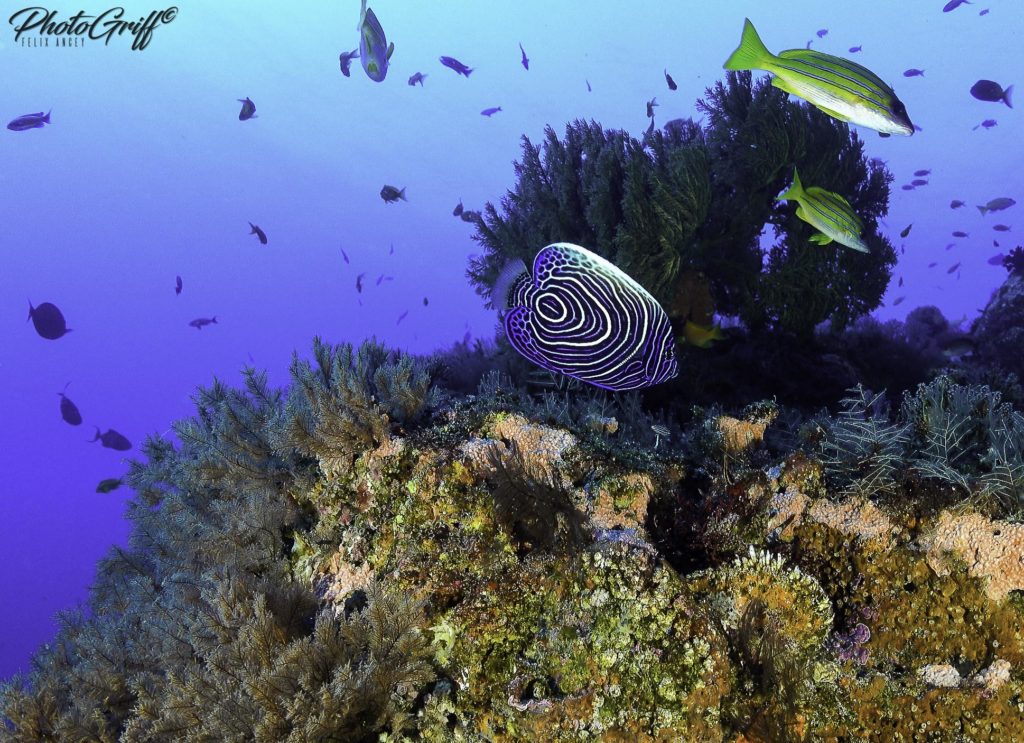 This show was embellished by a superb visibility, interspersed with small schools of fish standing out from the deep blue background of the Indian Ocean. A small current, present that day, carried us along this wonderful underwater world.

Ponta de Ouro is a destination not to be missed if you want to mix with several species of sharks. Back to Basics Adventure is a family center, and through their experience, guarantees quality dives safely.

The club has also been welcoming Shark Education for its expeditions to Mozambique for a few years, a good way to better understand the sharks on both sides of the surface, thanks to the dives and conferences offered.

Shark Education opened bulldog diving for france in mozambique this spot was not very well known for a few years right here you can find a whole file that Shark Education had to realize for us.

Currently on writing a book on nudibranchs, Jenny will also inform the most curious. In addition, the entire team reflects the kindness of this very welcoming country.

ARTICLES AND PHOTOS OF FÉLIX ANCEY