Nomad is created in 2004. Initially, it was a small center managed by Christophe Chellapermal, its founder, arrived in the UAE in 1986 and plunged into the Middle East from 1991. Nomad is a well-equipped center and you can find the spirit and atmosphere that could be found in the centers and camps of Dahab, Egypt, from the very beginning.

The center is equipped to offer recreational scuba diving or technical diving in sidemount, open circuit or rebreather.
The center offers various packages with diving and accommodation in the center, in the guesthouse, in private chalets or even in the surrounding hotels. It is also possible to rent boats and organize private trips accompanied by Nomad guides.
Nomad is not a factory center and when you come to dive in the region it is still rare to see other diving boats.

THE OPINION OF FRANCIS LE GUEN WHO IS RETURNING

“Under the green water and rustling with plankton, the black coral forest shakes its downy branches of the most beautiful yellow in the aquatic storm. Blue and purple gorgonians are also stung in this "French garden" decorated with comatulas where the cushion urchins add a little softness to the swords of the sea urchins. Orange-fleshed pearl oysters, yellow-mouthed leopard morays, seahorses: another world… Mobulae rays have just obscured the sun. Jade eclipse. A school of trevally engulfs us, to make you dizzy, geographic angel fish peck by the dozen under the uninterrupted train of blue ballistae. So much fauna, so much movement: green, blue, a little drunk, I come out of the hot water. An ordinary dive in Musandam ... 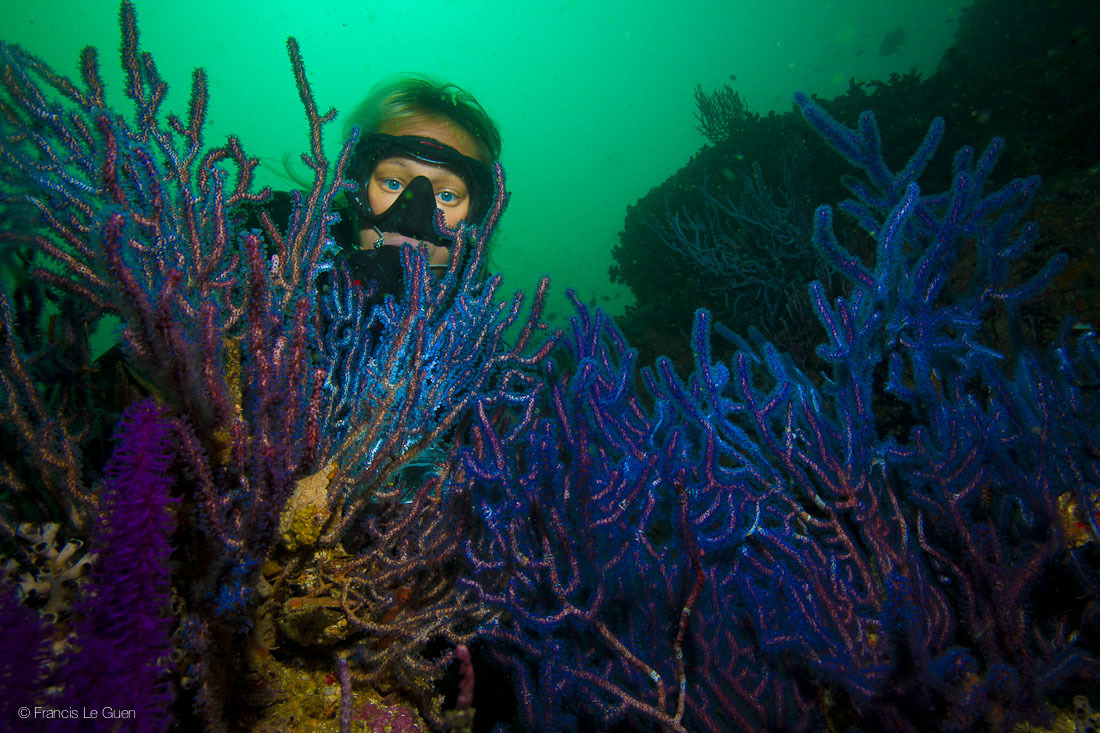 We are in the Far East of the Middle East, between the Sultanate of Oman and the Emirates. In this unexplored limestone maze of Musandam, finger stretched over Iran and determining the Strait of Ormuz, the black gold tap of the Gulf. These fjords, which have made the region known as "Middle East Norway", are still far from having revealed their full potential. This is only because of access only possible by boat or helicopter.

The story begins even on the red pebble under the annealed palm trees ... In Dibba. I met Christophe Chellapermal there, a Rabelaisian character. A father working in the oil industry, he knew the Emirates like the back of his hand, before developing a passion for diving and the rich waters of the north. It will be there! 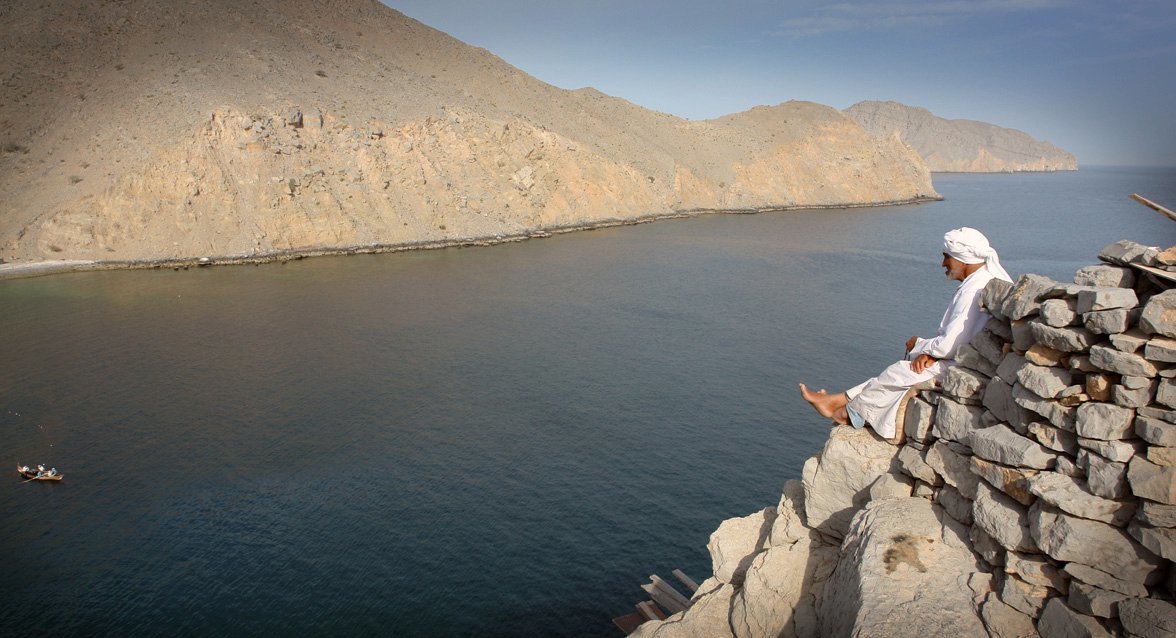 Between fierce drought and devastating floods of Wadi. Here is adventure. A lot of rock. And the sea.
We start with a motor, a pneumatic boat, a wrench. And then ... A nitrox center and recycler, two speed boats to reach the sites of interest ...
Here we do not fuss marketing: we are at the end of everything. If you have arrived there, you will not leave. But rest assured, you will have "all modern comforts" and a table known for the best of Musandam. The center is an oasis. Not to mention the new bungalows around the pool, very nice.

In the middle of his creative bazaar (mainly gutted respirators and cables of flashes slippery like snakes), Christophe dreams of expedition and regularly experiences the call of the desert. As a recycler along strips of sand that he prospects in the green night at the foot of the drop-offs, increasingly deep. Or in 4 × 4 through the red dunes for improvised barbecue parties, more or less crazy bivouacs ...

Going up to the far north, passing baroque limestone sculptures piled on the sea and the reflection of a fishing eagle, we arrived in the vortex zone. Where the Strait of Ormuz exchanges its warm waters with the Persian Gulf. The skin of the sea is stretched, bristles, sparkles, is covered with deceptive calm, black cut with the blue steel blade which plunges under the sea of ​​all the dangers. A strange mist covers the foreground, in the middle of the black rocks. We are alone here, on the border of another world, finding the enthusiasm of the discoverer of spaces. 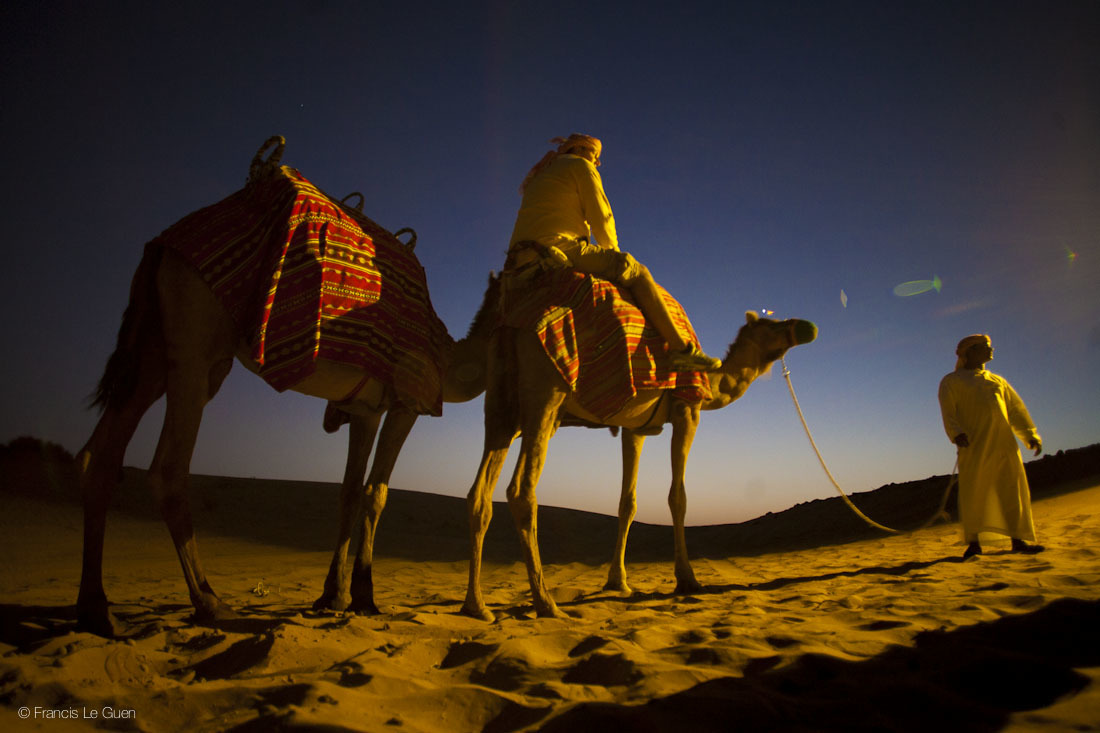 We start the dive against the light, to find a bright light in the twenty meters. The rock is entirely covered with small masses of pink alcyonnaires and large patches of bright orange tunicates. With the aquatic dawn rising in sky blue tones, the color palette is unique. I've never seen that…
Tornado fish and, in the darker green, on 30 m ... a wreck placed on the sand. A wooden dowh, the bar frozen on its last course. The ship of Sinbad Marin, without a doubt. Here, in the warm silence of the depths under the light of men, the Arab spells marry the fortunes of the sea. And how many other shipwrecks are still to be discovered, in this boat trap where the rich Portuguese and Dutch merchants were sailing. Ming objects? Yes, under the sediments of history, the coral is here of porcelain ... 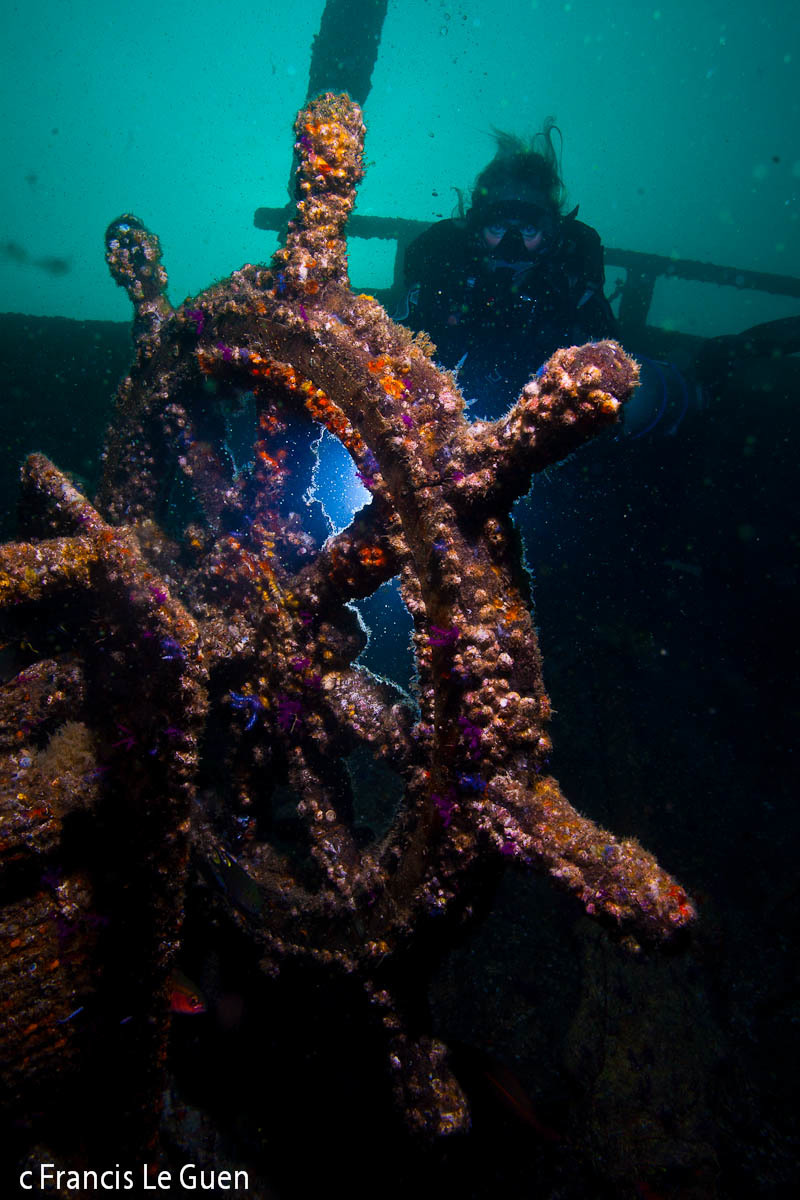 In the distance, Dubai, the extension proposed by Christophe, raises his needles to the sky. Disproportionate modern Babylon to visit the nose in the air ... These people do not need a space program: they will soon build towers to go there. In elevator. 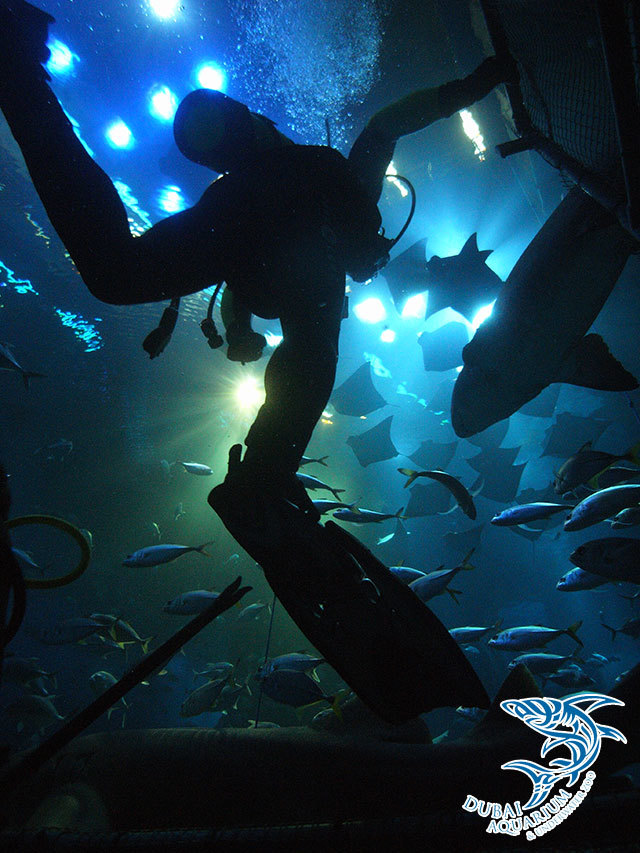 Tomorrow I will do my baptism in the shark aquarium and a dive of 800m. In elevator…"

Oman is in the heart of Arabia. It is a country that through the ages has managed to preserve its identity and culture.
Existing since time immemorial, Oman has always been a cultural hub thanks to trade with Persia, Mozambique and Tanzania, India and Portugal.

The Omani people, intimately linked to the sea (some characters have become true legends as Sindbad the sailor for example) also has a great experience of fishing and trade.

Open, warm and welcoming, the Omanis have the ability to make you feel the sweetness of living a thousand and one nights mixed with legendary Middle Eastern hospitality.
Oman has also been able to modernize and acquire a modern infrastructure with state-of-the-art technologies: you feel completely safe all the time.
With a flight time of about 6 to 7 hours, Oman is a country close to Europe that offers plenty of surprises, warm encounters and majestic landscapes.

The Wilayat of Musandam

Oman is a beautiful country because of its history, culture and location
Composed of different regions called willayat. Musandam is a region set back from Omani territory. We do not talk about it much and often because of its geographical separation. This mountainous land is located at the tip of the Strait of Hormuz. It is a region still very wild and very little developed. There are only 2 cities accessible by car Dibah and Khassab, surrounded by mountains plunging into the ocean. Passage between the Arabian Gulf and the Indian Ocean, many flora and marine life passes through the Musandam. In spite of all this region has remained wild and has been preserved.

There are still sites with reefs bubbling with life that we are looking for fat or very small and there is really everything to please both lovers of organic and those in search of fat ...

To get to Musandam a passage through Dubai is necessary. Located just 2 hours away by car, this proximity to this ever-changing city-state allows you to enjoy contrasting stays between Musandam with its majestic fjords and Dubai with, among other things, its vertiginous towers.

A SOLUTION AGAINST THE FACE IN THE MASK

DIVING IN SUDAN ON THE EPAVE OF UMBRIA

For info: Where we learn, that Agnes Milowka died this WE while exploring a cellar in Australia who starred in the film SANCTUM produced by James Cameron as an understudy and stuntwoman… where reality exceeds fiction…. was not a….