Home All SectionsPets Red Sea: the longimanus is back
PetsCruisesGreenland - with four paws to the iceberg!

Here he is again in the Egyptian Red Sea and that's quite a good thing. But who? Not the tourist, no. But a mythical shark: the longimanus or longimane shark. Frequently observed in the early 2000s, this oceanic shark had almost disappeared from radar. To come back better? It really seems like yes. 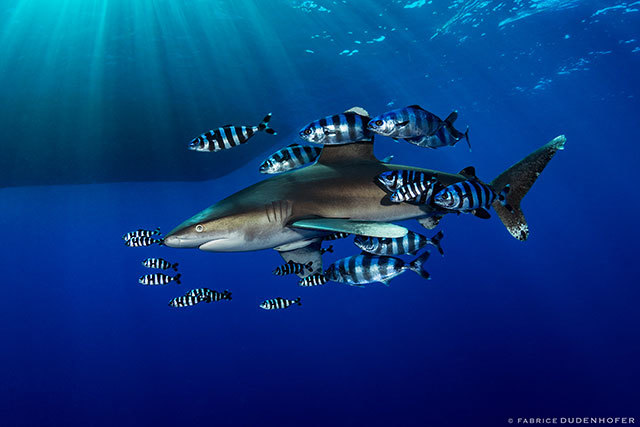 November 2016. An ideal month to perform, on one of our friends' shipsAlysees Diving, the BDE cruise. Is Brothers, Daedalus et Elphinstone, initials of three famous reefs of Red Sea because located off the coast of Egypt, and therefore preserved. At this time, the conditions are indeed conducive. If the ubiquitous northern wind is down, the chances of encountering different species of sharks are on the rise. As for the lukewarm water, it is maintained. In short, happiness in perspective. 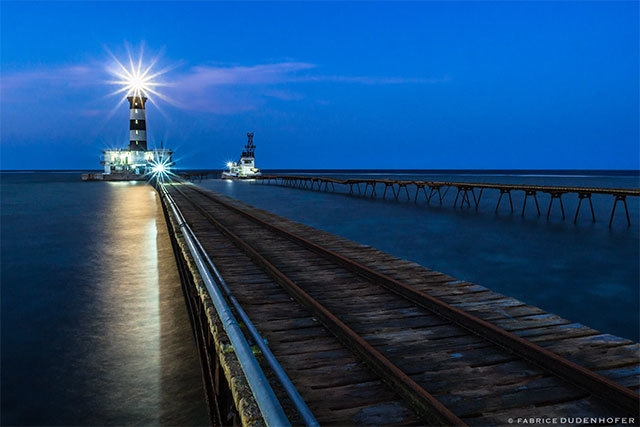 The only downside: the longimanus. This splendid shark, which we detailed in a previous issue is no longer really there. And this, for some time now. As the cruise progresses, and the sites follow one another, this observation is shaken up. Because, surprise, dives after dives, several specimens of oceanic sharks are crossed. Regular meetings under the boat as well as at night, from the deck. Also deeper, on occasion, around 30 meters deep. Until the visual apotheosis when, on the northern plateau of Daedalus, a longimanus slips, at - 40 m, into the school of scalloped hammers ... 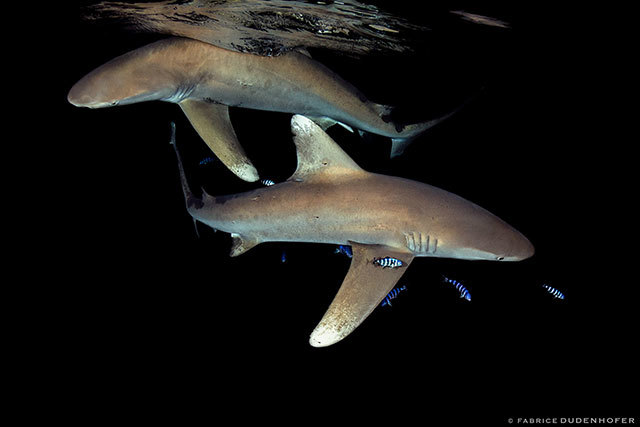 Taking advantage of the presence on board Steven Surina, we are conducting the investigation on this apparent return of the animal. This shark shark expert shares his experience through his association Shark Education. He is also a connoisseur of the Red Sea, with several thousand dives and a few hundred cruises to his credit, a privileged and competent witness. He explains that this return of the oceanic shark to Egypt is recent, dating back to the end of 2015. Progressive also, since it was observed first of all on its favorite sites, these famous offshore islands, Brothers, Daedalus et Elphinstone, that the animal frequents during its annual gathering, from the end of July to December. Then the meetings spread: reefs of Shoal Fury, until inside the lagoon Shaab Sataya, Zabargad et Rocky Island. They were also further north: at Sharm el Sheik, Hurghada and even over the wreck of the Thistlegorm ! 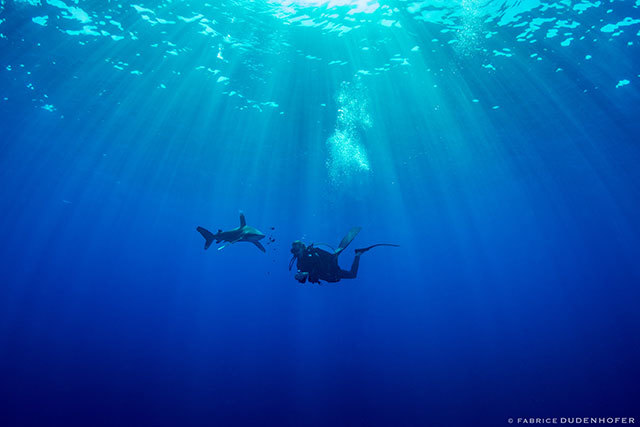 To help analyze the phenomenon, a word about the association Red Sea Shark. Through its participatory program, the Longimanus project, it has a registration system for the different specimens of oceanic sharks. The association has thus counted more than 600 since 2002. It was logical to think that the individuals observed in number in 2015 and 2016 on the dive sites, had already been previously reported. ”To our amazement, specifies Steven Surina, no shark reported in the last two years corresponds to an identified specimen, i.e. already present in the database of the Longimanus project. Most of them are young sharks, male and female, rarely measuring more than 2 meters. It should be noted, however, that the end of 2016 saw the arrival of larger sharks, from 2,5 m to 3 m, especially around the reef. Daedalus. " 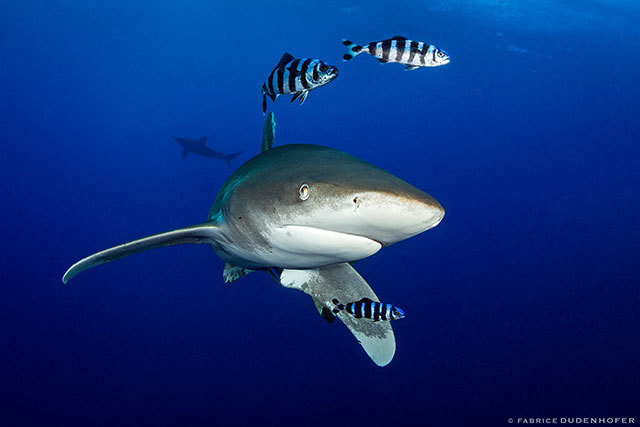 Estimating the age of a longimane is relatively simple because it is the pelagic shark that has the slowest growth. Unlike silky sharks (Carcharhinus falciformis) which can reach 2,5 m from 5 years, the oceanic sharks grow around their dorsal fin. If the latter is proportionately large compared to the rest of the body, then the shark is young. Conversely, if the fin is correctly proportioned, then it will have reached its adult size, its life expectancy being at most 17 years. These observations on their size, and therefore their age, especially underline an important point: one cannot strictly speak of "return of the longimanus" since the crossed sharks are young unknown, that is to say new. 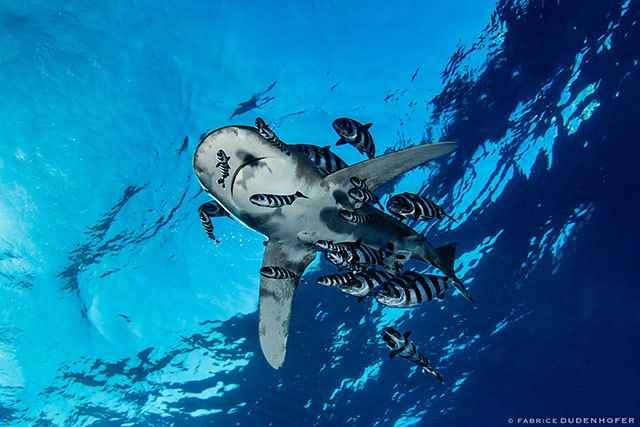 The disappearance of Red sea longimanus was seen as a direct consequence of the fisheries orchestrated by the Egyptian authorities in order to regulate their population in response to 2009 and 2010 bather attacks. A plausible explanation, since it is indeed as a result of these fisheries that sharks had almost disappeared from the coastal waters. A finding that seems all the more relevant as the oceanic whitetip seen at the time were adults, with a majority of sexually mature or full females depending on the season. But if the sharks were almost all eliminated, how then to explain this renewal of the species? Our expert has his idea: "My theory is that we have just gone through a natural cycle of population renewal. Studies have shown that once after giving birth, females leave the area not to attack the young, nor to compete with them for the same territory. They then go out to sea to feed themselves. 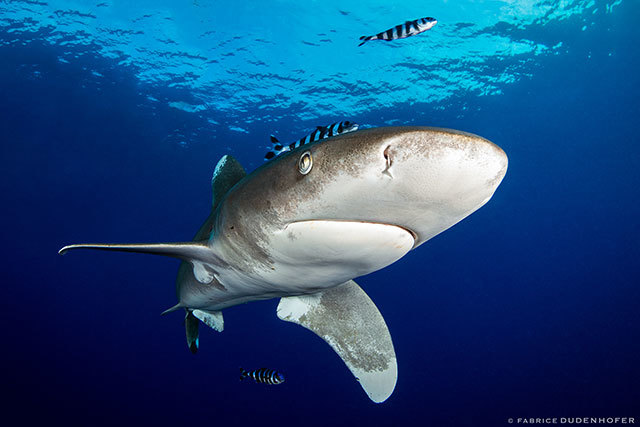 Thus, oceanic whitetip would frequent the coastal area, breed there and then, at more or less regular periods, move away to give room to young people and allow them to grow serenely. Without any serious knowledge in the absence of any scientific study to date, the hypothesis of such a cycle seduces. Moreover, there is a precedent: if, ten or fifteen years ago, observing oceanic sharks was frequent near the reefs of the Red Sea, it was less than twenty years ago. What is certain is that the many individuals recently crossed are young people and that we are dealing with a new generation. As a corollary, the fact that we now meet so many juveniles is perhaps the result of the significant decline in tourist attendance due to a delicate geopolitical situation that continues. Undisturbed, suffering much less nuisance from humans than before, the animals would embolden early. Even if such an explanation is only a hypothetical extrapolation, their presence is perfectly real. For the diver, this is the most important point and the assurance of crossing for the first time or again the road of a shark with unique behavior. You only have to see slow motion images captured at the end of 2016 by the team of Requiem project to be convinced ...

SATURDAY MAY 3 ... BOOKE YOUR EVENING