This cruise also called "the Golden Triangle" brings together 3 major places of scuba diving in the Red Sea where encounters with different species of sharks are frequent. Summer is a very good season to approach these magnificent lords.

the 1er Day, departing from Hurghada, you will dive on Gota Abu Ramada and the Police Station drop off. Then direction Big and Small Brothers for 2 days. These islands are the refuge of many sharks (gray reef, hammerheads, foxes, longimanus and silky) that we hope to be able to approach. Then direction the reef of Daedalus for 1 day. The northern point and its magnificent reef, is the territory of a school of hammers swimming in "the blue" ... The next day, the dives will be around the mythical reef of Elphinstone, for a probable face to face with hammerhead sharks, gray and longimanus. The last day will be in the area of ​​Safaga (Abu Kéfan or Panorama Reef).

During the cruise, Patrick Masse et Richard Allan will screen films and host 'special shark' workshops where they will not only talk to you about sharks but also the dangers that threaten them. If videographers are on board, Patrick will organize "shooting" workshops and "post-production" workshops, notably on the Final Cut Pro X software.

Richard Allan is the president of the association « Sharks at risk »And wildlife photographer. Through his association, Richard organizes year round series of conferences with large aquariums such as Nausicaa in Boulogne sur mer, the Cité de l'Océan in Biarritz or the Oceanographic Museum in Monaco. 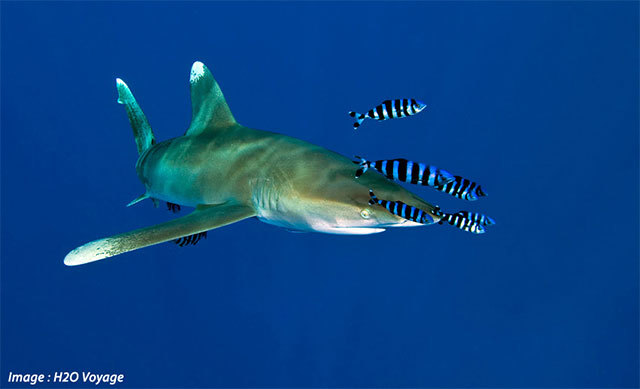 Patrick Masse, cameraman and director, has won numerous awards at major international festivals for his films “Le bal des tigres” and “Requiem pour un géiant”. Patrick is a specialist in sharks with whom he has dived around the world. Specialized in the behavior of large sharks, Patrick will be able to answer all the questions you have about the best way to approach and film these animals.

Regularly, Patrick and Richard, animate conferences and project films, in order to promote the safeguarding of the sharks and more generally the protection of the oceans.

The icing on the cake, the Nautile Evo will celebrate its 5th anniversary and the first anniversary of “Deep Silent”, the “bubble-free diving” component of the boat.

For those who do not know the Nautile Evo, its reputation is built on its comfort, its cuisine and the friendly atmosphere and professional edge.

This magnificent ship of 38m will welcome you in 12 double cabins, (including 1 large bed and 1 suite) all with air conditioning, mini fridge and private bathroom and wc.

And for common areas, it has a main square with dining room and spacious living room (air conditioning, video TV ...). The Sundeck (with hot tubs) and the solarium, are equipped for maximum comfort. Wide back beach and diving deck for your diving equipment and photo / video are at your disposal.

Nitrox is offered to certified divers.

Seadoors: The Diving Cruise in the Philippines

THE ALOES CENTER DIVES IN CERBERE

Last night dive a few days ago… night dive, return to the surface during the day 😉 I test diving at any time of the day !!! And there's no need to say, it changes all night long ...