Home All SectionsPets THE CROCODILES OF BANCO CHINCHORRO
PetsGreenland - with four paws to the iceberg!

THE CROCODILES OF BANCO CHINCHORRO

We have all already heard about its sailfish, whale sharks, sea lions, or cenotes, classic ou forgotten… but immerses with crocodiles… for us it was a first, when Greg Lecoeur told us about it! And yes, did you get it? Head to Mexico once again! Caramba! 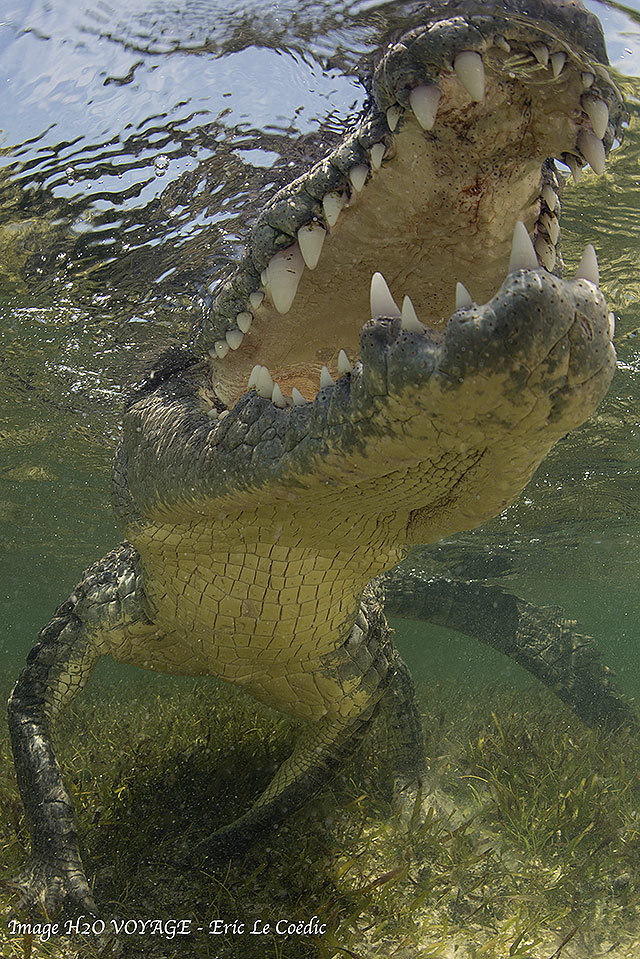 Didier, the boss of Phocéa Mexico, has heard about it and guarantees me that he can set up an expedition there. Who says “expedition” says H2O Voyage. I call Eric, one of his two bosses, to tell him about these mysterious Mexican crocs. Of course that interests him and of course he wants to be part of it… and that's how it sometimes happens that a new diving trip begins to take shape. 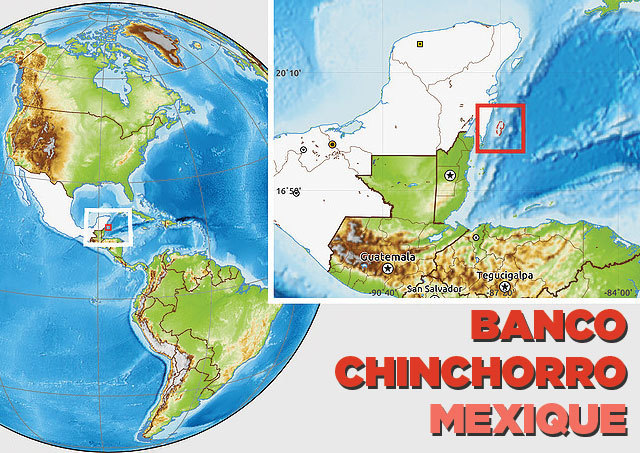 The biosphere reserve Chinchorro Bank
is located in the Caribbean Sea 30.8 kilometers east of the nearest continental point

A few days later, the dates fall on my screen. We will have the chance, so to speak, to discover this animal in its natural environment on July 26 and 27. Diving with crocs… when this next report is announced, my daughter bursts into tears and my mother fears that I am suicidal… In all honesty, I am not really reassured and once on the plane, he me. has happened several times to think that on this occasion, I would have done better to close my big g… .. 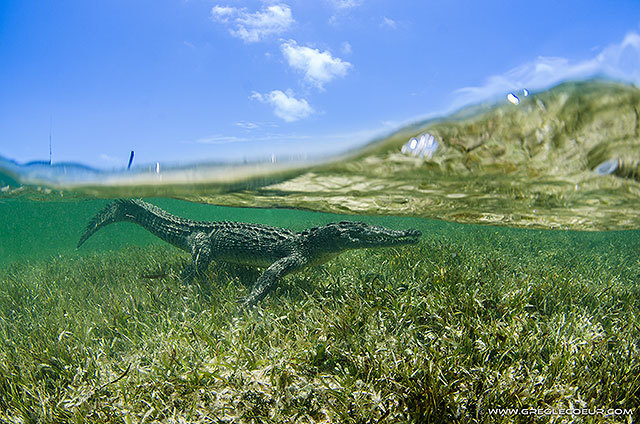 Despite my fears, I must admit that these meetings are rather placid. Like the shark, the crocodile is opportunistic and does not pounce on its prey like the cruel and bloodthirsty beast that has always been presented to us.

In order to attract the animal, the guides use lionfish as bait. Without this subterfuge, it wouldn't even show up, at least when we're submerged. In addition, in terms of safety, these fish act like magnets, which allows the crocodiles to be placed in the exact location chosen by our guides, in this case, a small step located just under the hut that serves as our based.

Video made in 2 days of immersion

Yes Judge, I plead guilty ... I chose to edit this video with scenes where the beast comes into contact ... otherwise you would have risked falling asleep!

On the first day, we were fortunate to have up to five individuals of up to three meters for nearly eight hours. And I have to admit that most of the time, the confrontation is rather calm. The animal is barely one meter away from you, but just scrutinizes you, wisely waiting for bait to pass within reach. It is only from time to time that he is more reckless and comes into contact. All you have to do is use your camera to push it back and the “monster” will move back… more or less quickly. Visibility was about 7 meters. 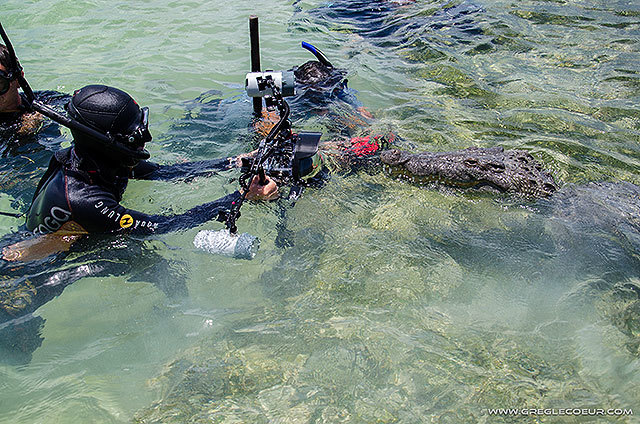 In addition, a guide armed with a foil is behind you, ready to step in if the need arises. That was not the case for us, except with a particularly excited youngster who clearly wanted to taste these unknown animals that we were for him. Thrills guaranteed ...

They are done in mask and snorkel, the fins are useless given the shallow depth: 1,50 m maximum. Before having lived this adventure, I was actually quite disappointed about it, but in reality, a boulder here would be much more inconvenient than practical.

We immerse ourselves two by two, for sessions of 20 to 30 minutes. Two guides accompany us. One stays with the “snorkelers” that we are, and the second positions himself at the back of the group to ensure that no mastodon takes us from behind.

Here, no palace or even a 1-star hotel… only the “bed and breakfast” on stilts of Matraca, lobster fisherman and owner of the premises, is available. The main room is transformed into a dormitory where hammocks are hung. It's spartan. But once you sleep in your king size bed, you have the feeling of living a unique experience. You might think you are in an Indiana Jones movie… except the movie, you live it!

The transfer from the continent to the reserve is in itself an adventure. It takes two good hours of sailing and the conditions can be very chaotic… the images below show you a crossing made in excellent conditions…

It can even happen that it is canceled due to the state of the sea. Anyway, if this is the case, the visibility becomes so bad that it would be dangerous to get in the water. .

Although present throughout the year in Banco Chinchorro, this cold-blooded animal prefers the rays of the sun. The best period to observe it is from June to September. The sailing conditions are also milder in summer.

Clearly, it is an “image” oriented stay. It is therefore primarily photographers and videographers from all over the world who flock to Banco Chinchorro. But in my opinion, it's a bit the same phenomenon as 20 years ago when shark diving became in the media and gradually became commonplace ... at the time we were crazy and today, It is clear that a large part of the divers had the chance to immerse themselves with the “monster” of yesteryear. 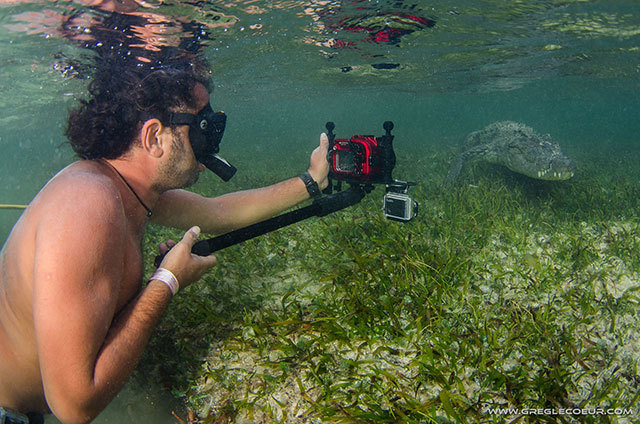 It takes a good four hours drive from Playa del Carmen to reach Xcalak, the starting point of the transfer. Although it is possible to spend only one day, we recommend that you stay there for two to three days. Indeed, the crocodiles are there, but from time to time they can be “capricious”.

Phocéa Mexico has added this extension to its already long list of services. As this remains a special trip, Didier has chosen to give the exclusivity to H2O Voyage because Eric really knows the “product”…

H2O Travel has already set up 3 dates for this year:

It is one of the largest species of crocodiles. Adult males have an average size of 5 meters and can grow up to 6-7 meters. They usually weigh around 400 to 500 kg, but individuals over 6 meters in length can exceed a ton.
This species frequents both fresh water - such as rivers, but also lakes and artificial reservoirs - and brackish water - such as estuaries, coastal lagoons and mangrove swamps.

The name of the species, acutus, means sharp in Latin and refers to the shape of the muzzle.

Large adult males have no natural predators and are potentially capable of attacking any animal at the water's edge, although their diet is mostly fish.

The American crocodile is often accused of killing cattle, but actual cases are quite rare. It can also be dangerous for humans and attacks in Mexico, Costa Rica and Guatemala have been proven. But these attacks are rarely reported by the international press and therefore the species is not as well described as a man-eater than the relatives of the Old World and Australia. The species is described as shy and having a low propensity to attack humans. In May 2007, in a single week, two cases of fatal attacks on children were nevertheless reported, one in Mexico just south of Puerto Vallarta, and the other in Costa Rica.

Current populations are estimated at 10 to 000 individuals. The animal was hunted a lot for its skin between 20 and 000. Today, it is rather a smaller residual hunt associated with the destruction of habitats that is the cause of the reduction in its numbers.

Banco Chinchorro is a UNESCO biosphere reserve located about two hours by boat from the Mexican mainland. Only a few fishermen live there in a rudimentary way during the fishing campaigns, in particular that of the lobster. A scientific base also works there year-round to study and better understand the functioning of the ecosystems of this atoll.

The biosphere reserve Chinchorro Bank includes reef formations, a reef lagoon, three rocky islets - Lobos islet, Centro islet, and Norte islet - and adjacent ocean waters. It constitutes a reef set in the category of atoll or platform reef. The reserve, considered one of the largest structures of its kind in the Caribbean Basin, is the largest in Mexico. 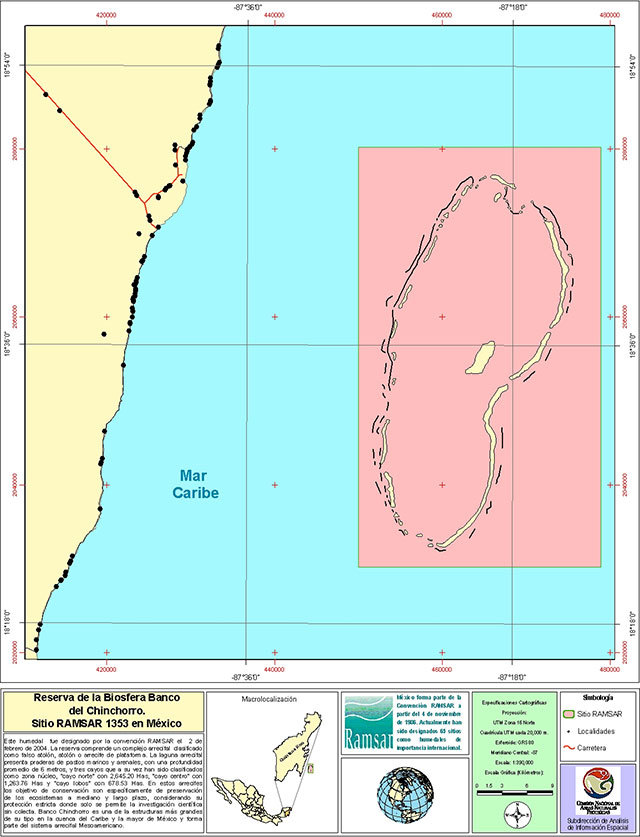 The research carried out in the reserve made it possible to draw up a list of 778 species: 58% correspond to marine fauna, 14% to terrestrial fauna, 18% to marine flora and 10% to terrestrial flora. Fishing, which is the most important economic activity in the Chinchorro Bank for more than forty years, is of course regulated by a series of standards established at the creation of the reserve. 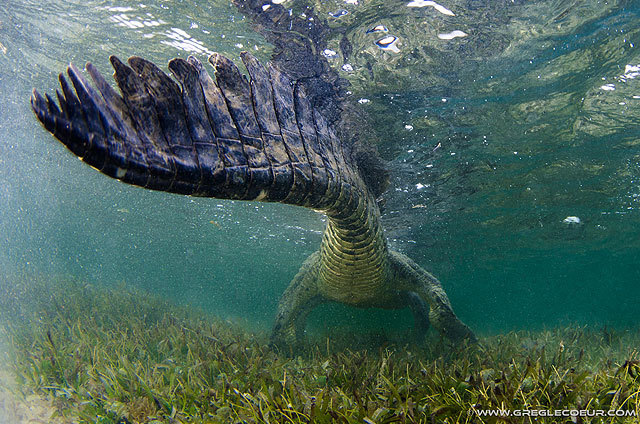 * The species listed in Appendix I are the most endangered of all animal and plant species covered by CITES (seeArticle II, paragraph 1, of the Convention). Being threatened with extinction, CITES prohibits international trade in their specimens except when the importation is not made for commercial purposes (seeArticle III) but, for example, for scientific research purposes. In these exceptional cases, transactions can take place provided that they are authorized through the issuance of an import permit and an export permit (or re-export certificate). Moreover, Article VII provides for exceptions to this prohibition and these obligations.

** Appendix II is the list of species which, although not necessarily currently threatened with extinction, could become so if trade in their specimens were not tightly controlled. It also includes what are called “similar species”, i.e. those whose specimens in trade resemble those of species listed for conservation reasons (see Article II, paragraph 2, of the Convention). International trade in specimens of species included in Appendix II may be permitted and must in this case be covered by an export permit or re-export certificate. CITES does not require import permits for these species (although a permit is required in some countries that have taken more stringent measures than those provided for in the Convention). Authorities responsible for issuing permits and certificates should only do so if certain conditions are met, but especially if they are confident that the trade will not adversely affect the survival of the species in the wild (see Article IV of the Convention).

The Exocet struck a reef

Diving in Lanzarote at Aquasport Diving

Diving stay in Mauritius & Observation of ...

Octopus magazine is in bookshop http://www.lac-du-bourget.fr/index.php?post/2011/06/28/Le-magazine-de-plongee-Octopus-parle-de-notre-plong%C3%A9e-sur-le-Protee-et-le-Natal