There is hardly 1 year, GOPRO unveiled his GOPRO HD2. And we must admit that it was a revolution in terms of quality. Well, that the afficionados of the mark are reassured, Nick Woodman, creator and boss of the young company has just done even better. And yes, just to show Sony, Canon and others who is and remains the boss on the market of the sports camera onboard.

SOME WHO TALK ABOUT IT, SOME WHO HAVE TOUCHED IT ...

When Hubert from home Plongimage phoned us to taunt us: ”guess what I have in my hands…”, we only jumped. Already 1 week since the info was on the web and the coveted object was announced for the end of this month. We asked him to make a little video for us, just to turn around the beast.

Imagine a little, 30% smaller and 25% lighter (74 grams without housing) than the HD Hero 2… The sharpness is improved and offers less distortion… It is not one but 3 versions at 3 different prices than the manufacturer offers us: 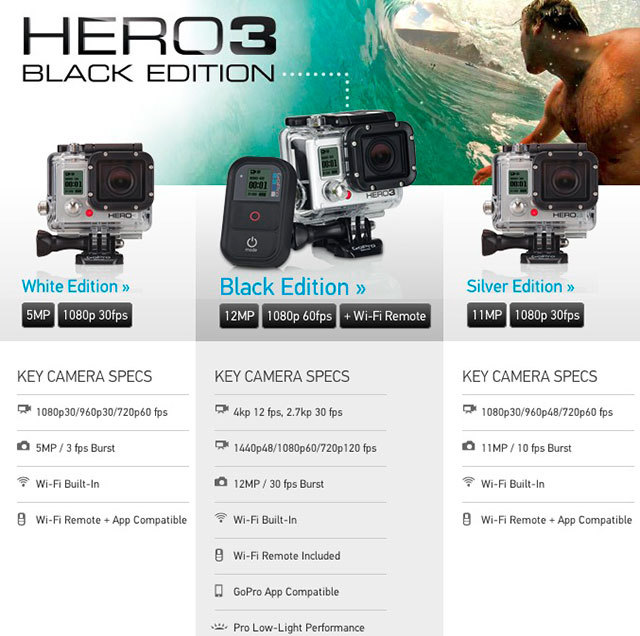 Resumes the same possibilities but with an 11 Mpixel sensor (burst mode at 10 images / second). It takes the recording resolutions of the white edition by improving the mode to 960 p (at 48 images / second here). Price: 349 €

Water resistant to 60 meters, a 12 Mpixel sensor (burst mode at 30 frames per second) and the possibility of filming in 4K * at 12 fps, in 2K at 30 fps, in 1440p at a rate of 48 frames per second, in 1080p at 60 fps and in 720p at 120 images / second (the slow motion will be beautiful!): it represents the top of the range of the firm. Its offer includes a waterproof Wi-Fi remote control up to 3 meters allowing the device to be operated remotely (triggering, starting, stopping, parameters) and having fasteners to be able to place it on a bicycle handlebar or a steering wheel , for example. Price: 449 € 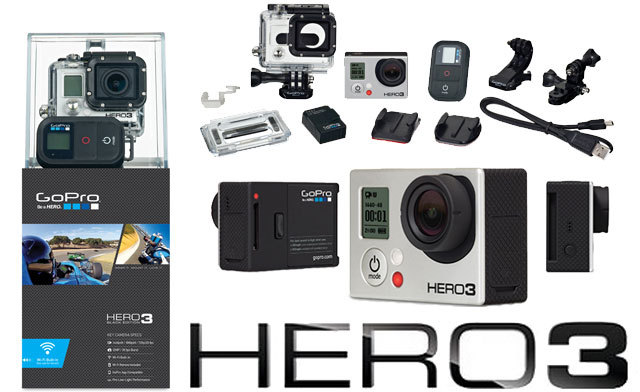 But this all-terrain camera doesn't stop there. The three versions of the Hero 3 are also compatible with the new GoPro App and CineForm Studio applications for iDevices and soon Android, which are shaping up to be exciting.

This new application allows, first of all, to use an iPhone or an iPad to take control of your device (settings, options, switching on, off, battery level) while seeing, on the screen, this that the camera sees through the lens. Then, it displays your shots as a post-viewing screen, giving you the flexibility to choose the best photos to keep. Finally, GoPro App gives the possibility of being able to broadcast live videos on the Internet, to control several cameras at the same time, or to join a community of Hero camera users who will display the best photos and films of the day. The other application, CineForm Studio (available for Mac), appeals to the artistic side of the Hero 3 enthusiast, giving the possibility to modify the speed of the films, their aspect, their format or to insert elements. 3d.

Finally a flat lens of origin !!! No need to change this damn lens to make clear underwater images.
A box closure finally worthy of the name, which will avoid frights or even drown the camera diving.
From 120 images / second to 720… the slow motion will be magic.

The ability to film in 4K at a speed of 12 frames / second… it works well for the com 'but in reality it will not break a duck's 3 legs.
The memory card becomes microSD… big fingers will be celebrating.
The BacPac LCD and the Battery BacPac are not compatible between the 2 and 3 versions.

A priori, no external marking to distinguish the versions.

No idea, we should see the list of registrants, I have not yet made the effort. In addition, Sea Shepherd, for the oceans, seems to me to be more efficient, in terms of their presence at the show…. it was already a controversy last year