Plenoptic camera, marketed for the first time at a reasonable price.
The interest? The ability to focus on the computer, well after shooting. Of course, no submarine box yet, but we can bet that it's only a matter of time ...

Cameras project the universe (in three dimensions) onto a flat surface (the sensor). The problem is that the lenses create a three-dimensional image - the image of a subject, which brings together all the light rays from it, is more or less far from the lens depending on the distance from the subject. . It is therefore necessary to make a development, that is to say to choose which plane of the universe will be projected on the sensor; objects located in front of or behind this plane will have a blurred image. 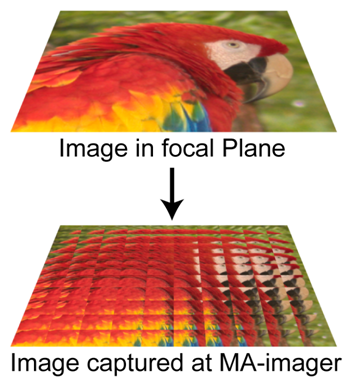 However, there is a solution: to record not the light striking the sensor, but the light rays themselves, with their direction of arrival. We can therefore calculate the place where all the rays starting from the same object cross, in other words the place where the image of this object is formed; thus, we can reconstruct a real “3D image” of the universe, and the software can develop this image with complete clarity, from the foreground to the horizon: the depth of field is thus infinite.

He can also focus a posteriori, by deciding that the “image plane” will be at such and such a place and that the more or less close objects will be blurred: we then obtain the same image as if we had used a conventional camera. , but you can change the focus at will.

The only problem is that it is necessary to record several rays for each point of the photographed subject: it is the intersection of these rays which makes it possible to calculate the image. The devices using these technologies, called “plenoptic”, therefore use very high definition sensors, to provide final images of mediocre definition. Worse, the use of such sensors, with the necessary arrangements, entails a prohibitive cost which reserves the plenoptic devices for marginal uses.

This is no longer the case with Lytro devices. These are fairly conventional plenoptic devices, capturing 11 million light rays. They are equipped with an 8x zoom (focal lengths equivalent to 35-280 mm), with a constant aperture at f / 2.

FINAL DEFINITION OF THE ORDER OF THE MEGAPIXEL

The definition of the images obtained is a great mystery, even if Lytro announces at least 1080 pixels aside, allowing to suppose that the final definition would be of the order of the megapixel. It might not seem like much, but the users targeted by Lytro are more likely to share their work on Facebook than to make it into exhibition prints ...

LYTRO IS NOT INTENDED FOR THE TECHNICIAN

The stylistic approach is deliberately minimalist - the device is a square tube, with a lens on one end and a touchscreen on the other. The philosophical approach seems rather restrictive, the publishing software sending the images to the Lytro site: it is only from this that the user will be able to share his image ...

AVAILABLE SINCE THIS WEEK IN THE US

GoPro 5… and yet another new action cam

iDive: WHERE WILL IT STOP?

I told you, as late as possible!