We cannot say that the subject has given rise to a multitude of works. So when Franck Vasseur published his Cave Diving Technical Manual last January, it seemed relevant to us to echo it and get to know this “sout” diving expert… as they say.

HOW AND WHEN HAVE YOU STARTED?

Born in 1968, the year of protesters if any. Sensitized from a very young age to the things of nature and to the D system by scouting - secular and mixed all the same.
Reckless beginnings in speleology in 1984 with recovered and tinkered with equipment - without CE standards - then more seriously in contact with several clubs in Montpellier (CLPA, SCAL) from 1986. From the arcana to the canyons, there is only one step , crossed at the same time with the late Montpellier Spéléo-Plongée Group.
Educational fiber? The Spelunking Federal Initiator is won in 1988.
Frustrated - to see hypogeous treats abbreviated by water in the cave - and call of weightlessness, learning diving techniques in 1987. Only to extend the cavernicole adventure, begun in stride, in 1988, learning on the job and mutual contact with other adventurers of the same caliber.

Gear of the implication within delegated federations (O'hara and O'timmins way of Lucky Luke) in levels (departmental, regional, national) and fields (teaching, publication, relief, international relations) various. But more comfortable within the ankles (commissions) than federal fairs and other VIP squares.
1991: creation of the association celadon, devoted to the study, exploration and communication on the underground environment.
This results in literary (publications) and theatrical (conferences) involvement in order to share and disseminate results, impressions and observations.

“Cave diving cannot be assimilated to diving in the usual and maritime sense of the term, nor to speleology. This discipline in its own right, still young, was initiated after the war. It mobilized explorers driven by the desire to study and explore a natural environment. Before them, others had climbed summits: today, all are climbed from all sides. Others had gone to the white areas of the maps: the surface of the globe is entirely mapped. Others challenged weightlessness: we walked on the moon, our robots tease Mars. Yet our planet conceals spaces that are still unknown: the abyss and the caves. The exploration is still relevant today. It is the engine of activity. ” 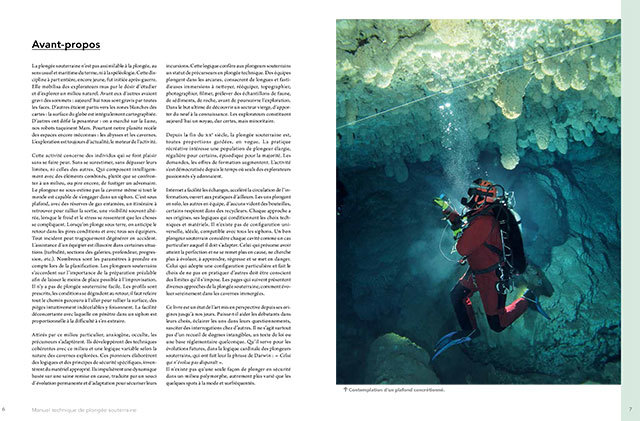 How many practitioners for this activity?

Difficult to say, because today there are a lot of episodic practitioners. For the Lot department alone, the General Council estimated attendance at 10 dives per year, all sites combined.

The Lot is one of the European temples of deep diving, is it the only place to learn?

No, practically all limestone massifs have sites, but not always compatible with schooling. The problem is to find inflation centers for the bottles. Only the Lot is equipped. 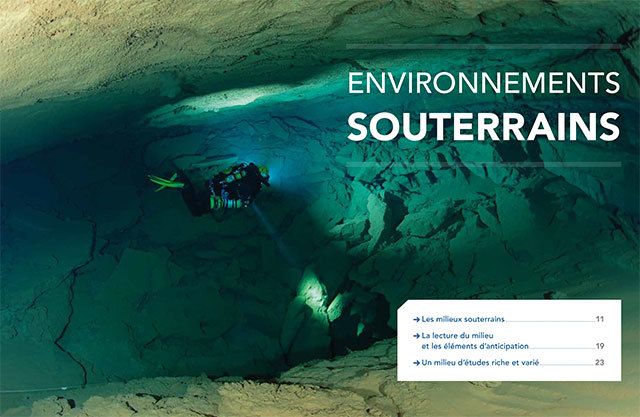 Do you estimate how many structures offer initiations?

Not a lot. There are the two French federations, some associations, some independent monitors or structural managers, but no more than 5 or 6.

What are your tips for getting started?

Define the framework of its practice (what types of cavities), its limits, its approach (solo or team) and above all remain humble and go there gradually. All escape and safety procedures practiced in sea diving become obsolete underground, due to the presence of a ceiling.

- proven configurations in a given setting,

- do not give in to the mirages of virtual stories and unhealthy emulation,

- beware of mercantis disguised as monitors, proselytes of techniques and configurations developed for the sale of “products”, rather than motivated by security,

- equip yourself with the right equipment without any superfluous. 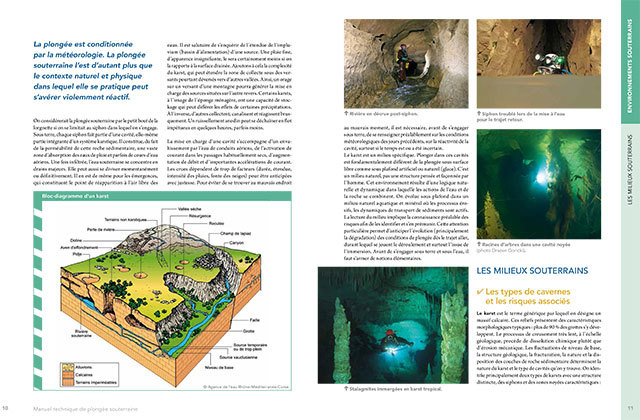 A historical option for European divers, the solo diver is autonomous. He foresees the palliative solutions, takes redundant material, builds his experience and acquires the necessary knowledge to become self-sufficient. Speleologists have favored solo diving, in total autonomy. Under certain conditions, diving alone is a guarantee of safety. The solo diver assumes and organizes himself, without vector of the additional risk that a team member would constitute. Autonomy translates, on the material level, by the application of the principle of redundancy. The multiplication of palliative solutions to any failure affecting a vital part of the equipment is obtained by doubling (at a minimum) the vital technical elements, management techniques adapted to the circumstances and particularities of the environment.

The programs of the agencies and schools of influence across the Atlantic are based on the concept of a team. “Never dive alone”, “never dive alone”, the group forming an inseparable whole. He develops the objectives, plans the immersion, organizes his equipment, remains united throughout the dive. Divers get to know each other in order to achieve maximum efficiency. Dives undertaken with this in mind are planned by increasing the safety margins in terms of gas and commitment. A team has a maximum of 2 or 3 divers. 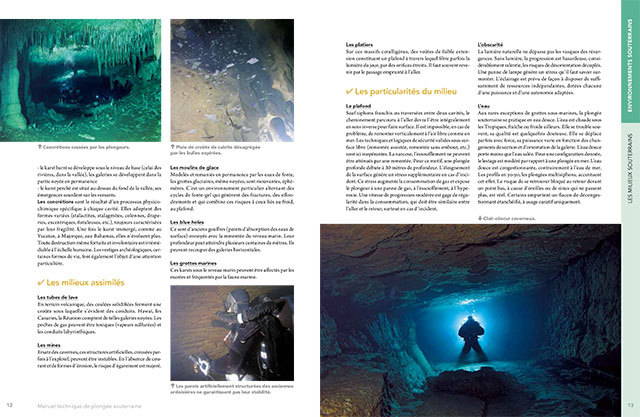 I must admit that apart from a few forays into the clear, warm waters of the Yucatan cenotes, my cave diving experience is non-existent. Nobody is perfect. So when we had to dive into this 300-page book ...

The layout and iconography make this work fascinating. It's filled with full-page photos, diagrams and sketches that make you want to read on. I told you at the outset that I have never met Franck, but the tone and the way of considering this activity are very “earthy”. The kingpin side of the guy who always puts on the fins and who thinks. Sprinkle it all with a good dose of humor, for example, the sociological sketch, page 35, is pure happiness… Franck portrays certain stereotypes of cave divers in Prévert's way. The “newbie”, the “chiantifique”, the “consumerist”, the “federast”, the “disciple” are just a few portraits sketched for our greatest pleasure.

Don't think it's a humorous novel either. From the first pages, we are immediately caught by this book full of information that may be of interest to both novices and experts. In the end, I learned a lot while having a good time.

Clearly, to own in any good diver library. 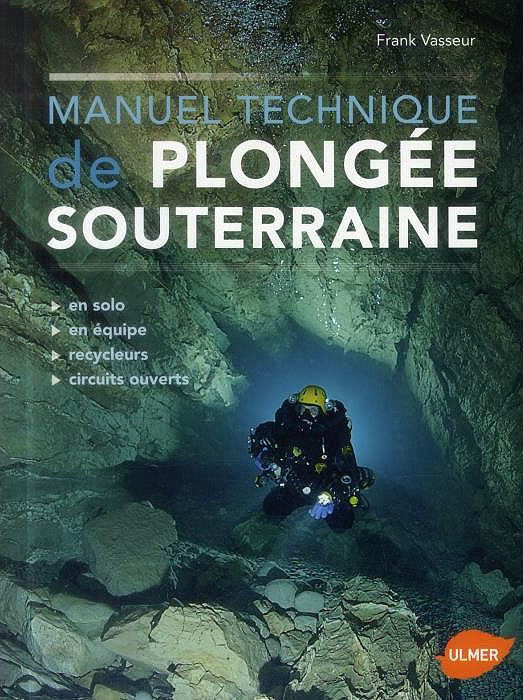 Franck often draws the parallel between cave diving and the mountains and in particular the Himalayan expeditions. Remember that not everyone's name is Maurice Herzog and that doing the mountains does not necessarily mean doing 8000 m… “Indulge yourself, without being afraid”.

MANAGEMENT OF A DIVING ACCIDENT

The Proteus: Tale of a loss

Of course, guards who close their eyes, for some may be in the pay of poachers, authorities who bayonenr the center managers by making them dangle the cancellation of their work permit !!! Yes it's not easy, I don't really know what to do, either, behind my screen thousands of kilometers from Sipadan ...

If we do nothing, there will be no more reason to dive there, so no more clients for the centers, and as a result, no more centers !!! But beyond basic economic thinking, we will have allowed species to disappear, and our planet to die a little more.