The Association for the Study and Conservation of Selachians (APECS) goes to meet basking sharks during their passage on the Breton coast.

In Spring basking sharks are passing through the Southern Finistère. What is the migratory path of the basking shark? Where is the rest of the year? When and where does it breed? Many questions remain unanswered ... But APECS, association Brestoise which acts in favor of the conservation of rays and sharks, carries out in particular researches to learn more on this great traveler and this for more than 20 years now. 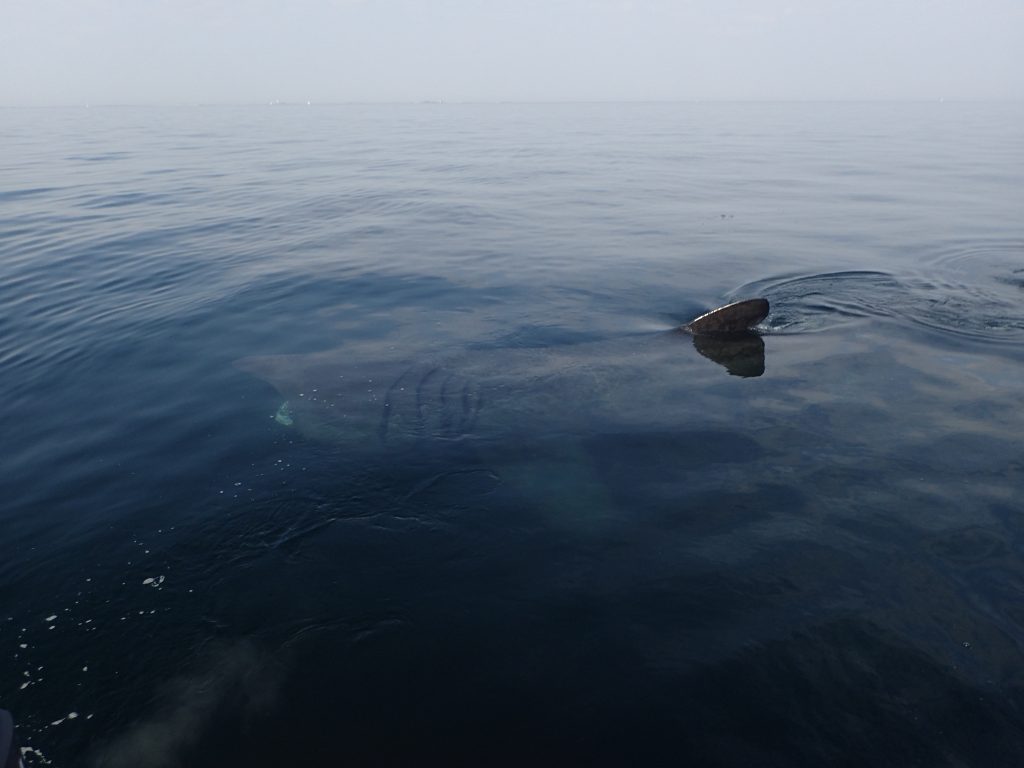 The basking shark is a giant that can grow up to 12 meters in length and weigh up to five tonnes, making it the second largest fish in the world after the whale shark! This harmless species can be observed on the surface of the water in certain sectors and at certain times of the year, peacefully filtering the plankton. Even if it has very small teeth, this shark is only fond of copepods, microorganisms inhabiting the oceans, which it traps in its gill combs while walking with its mouth open. Note all the same that it can filter the equivalent of an Olympic swimming pool in an hour! It is a cosmopolitan fish, that is to say that it frequents both temperate, cold and tropical waters. However, it seems to prefer temperate to cold waters, where it is easier to observe it on the surface while it stays deeper in low latitudes. During its seasonal migrations, it can evolve from the surface to more than 1000 meters deep. It is the recent use of satellite tracking beacons that now allows us to learn more about this species! Despite the use of new technologies to improve knowledge about the basking shark, there are still many questions to be answered about its biology and ecology. Considered threatened according to the International Union for Conservation of Nature (IUCN), the previously exploited species is now banned from fishing but many threats still weigh on it (bycatch, pollution, etc.).

APECS and basking shark, more than 20 years of monitoring:

Created in 1997 in Brest, theAPECS works for the conservation of sharks and rays and more broadly for the preservation of marine ecosystems. It contributes to the development of scientific knowledge through the implementation of research programs and carries out education and awareness-raising activities for different audiences. From 1998, the association launches the national survey program of basking shark sightings following the scarcity of observations. This participatory science program uses sea users to collect data. Actions to improve knowledge of the biology and ecology of the species then multiply over time. 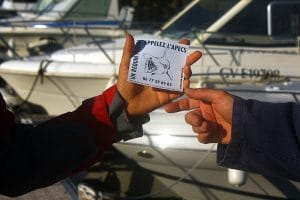 In case of observation: Have the reflex, call theAPECS ! Enjoy the show by cutting off the engine of your boat. Notify APECS as soon as possible at 0677596983 and complete the online form online on the association's website. Write down the date, time and place. Estimate the size of the shark and if you are equipped, photograph the rear wing and the tail.

Distribution of stickers to sea users

Launched in 2015, this program enriches the actions initiated by APECS since 2009 to better study the large-scale migration of basking sharks and its dives in the deep oceans through the installation of satellite tracking beacons. By contributing to the international tagging effort undertaken in Europe since the beginning of the 2000 years, this work can also help to identify areas of particular importance for this species. 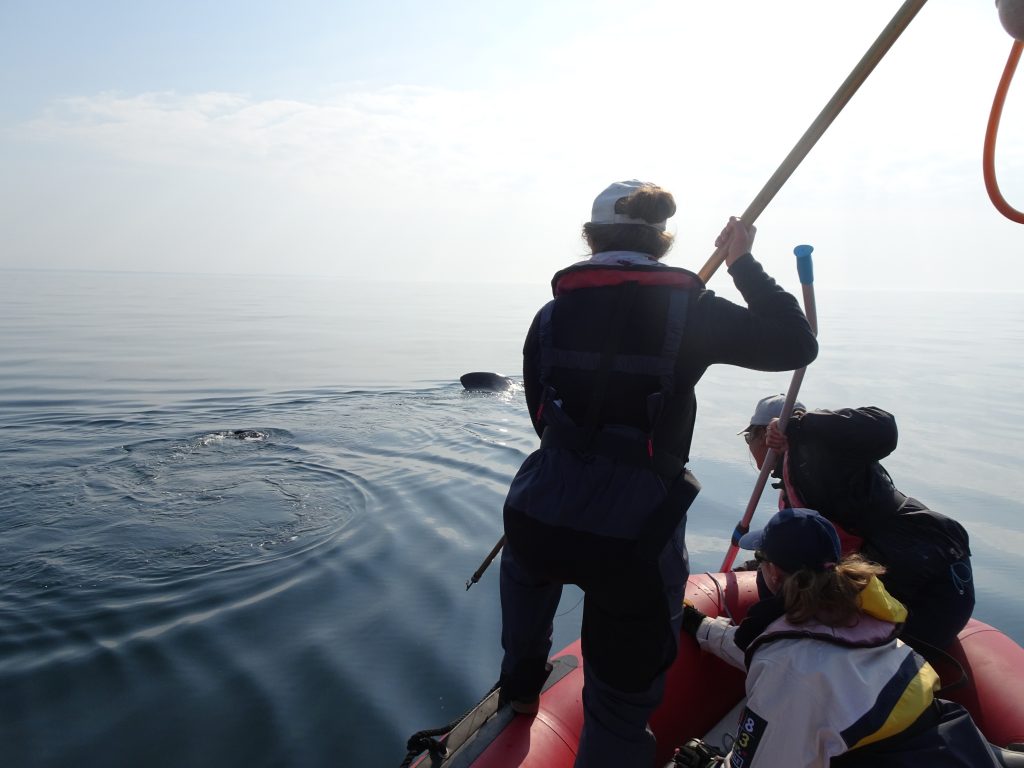 The field missions take place from April to June, the most favorable period for the observation of basking sharks in southern Finistère (29), with the help of APECS volunteers. As soon as the APECS receives reports of basking sharks in southern Finistère by the boaters, a team goes out to sea in search of the fins. Once the shark is spotted, different actions will follow each other (behavior observation, photo-identification, sex determination) before the tag is set.

Two types of tags are used: 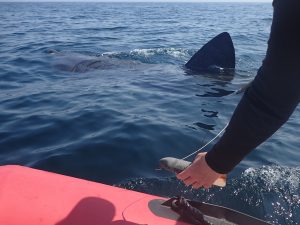 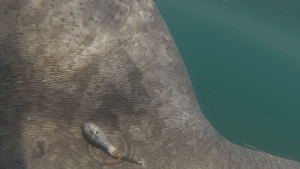 2018, an exceptional season and a world first:

The field campaign is over for the 2018 year but it was an amazing season! Eight basking sharks could be seen between 6 and 7 May. And if we have to remember only one date, it is the one of the 7 May, day during which the team had the chance to cross the road of seven sharks and to equip three with tracking tags by satellite! The movements of these three sharks, baptized Marie B, Fanch et Bazil are now monitored daily by APECS. In addition, there are not three but four tags that have been deployed ... Indeed, the team managed to put two tags (a SPOT and a MiniPAT) on the female (Marie B). If this double tagging had already been done on a whale shark, this is a world first for the basking shark! The aim is to compare, initially, the path estimated by the MiniPAT beacon with the Argos locations obtained in real time with the SPOT beacon. In a second step, the mathematical model used for the MiniPAT beacon to estimate the path taken by the shark can also be improved by relying on the exact positions transmitted by the SPOT beacon. Fanch Bazil are equipped with a SPOT beacon.

The results of these follow-ups will help to better understand how tagged individuals use French coastal waters and, more broadly, the waters of the North-East Atlantic. This mission was accomplished thanks to the mobilization of boaters and fishermen from the area who contacted us to report the presence of sharks.

Portraits of Marie B, Fanch and Bazil, the three sharks equipped with tags: 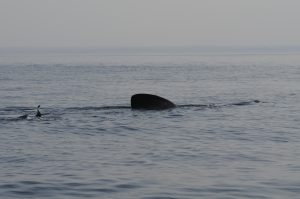 Marie B is a female basking shark of 6,5 meters carrying both a SPOT beacon and a MiniPAT beacon. She sailed between Glénan et Groix up to 11 May before migrating to the North Sea a hundred nautical miles offEdinburgh, where she walks since the 27 May. 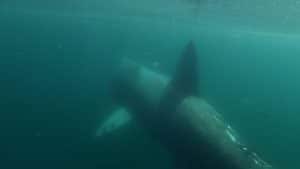 Fanch is a male of 8 meters wearing a SPOT tag. This individual is easily recognizable at the end of his cut tail and he has no second dorsal fin. He stayed in the area until May 9. After three weeks without news, it has resurfaced the 31 May in Sea ofIreland, on the coasts of the'Isle of man where he was until June 7. He then continued his route to the North Canal, between Northern Ireland and the'Scotland. He resurfaced the 3 July at the island of Coll our Hébrides. 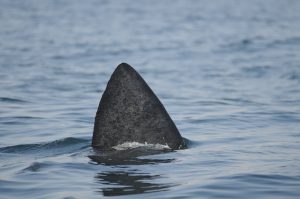 Bazil, a male of 7 meters wearing a SPOT tag does not communicate as much as his two other congeners. After spending the day of 7 May at Glénan, he joined the south of Cornwall English from the 11 May. We have not received a new position since that date ... but where is Bazil? 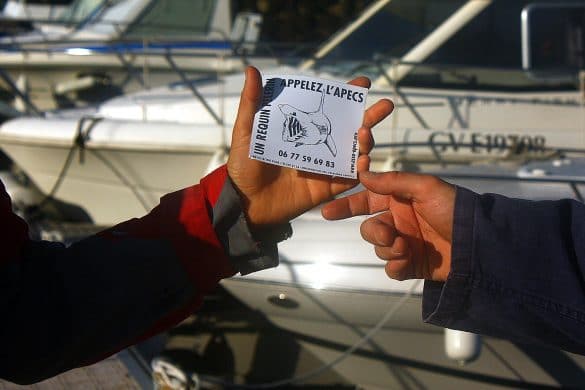 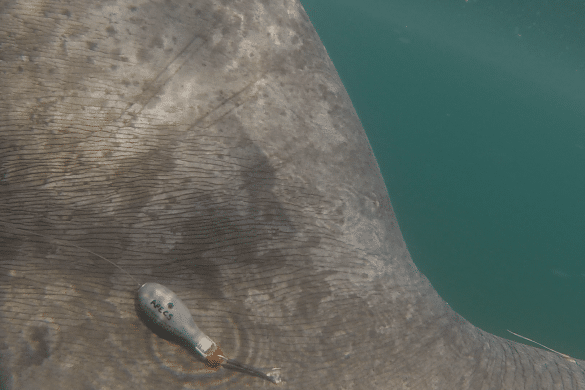 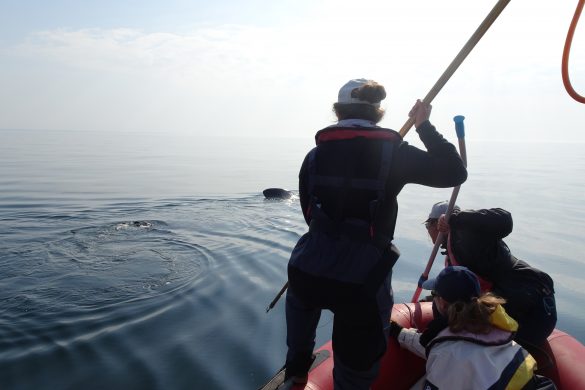 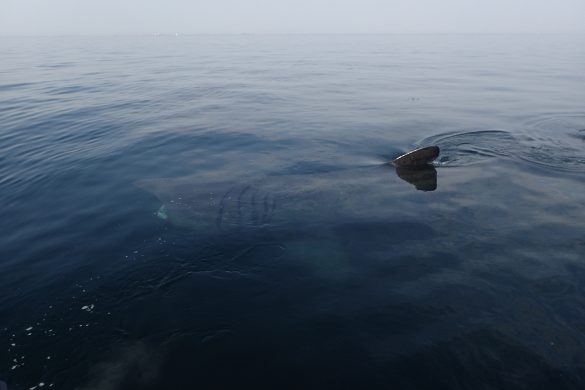 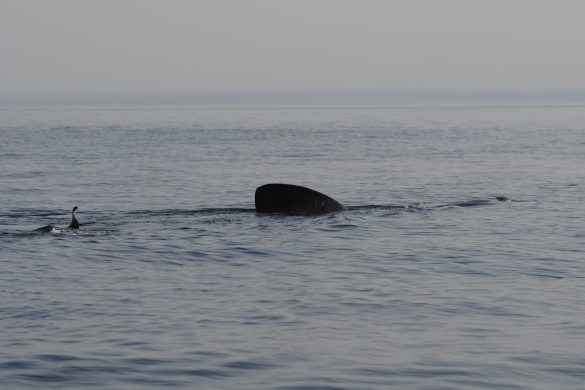 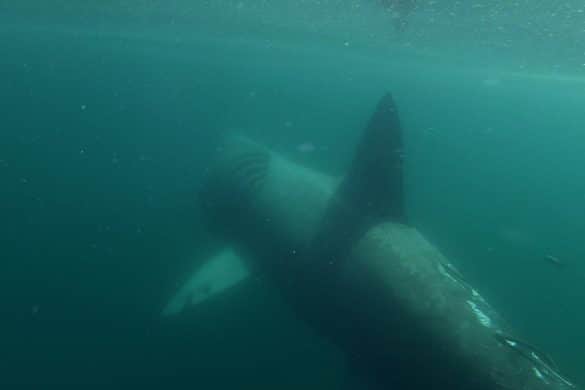 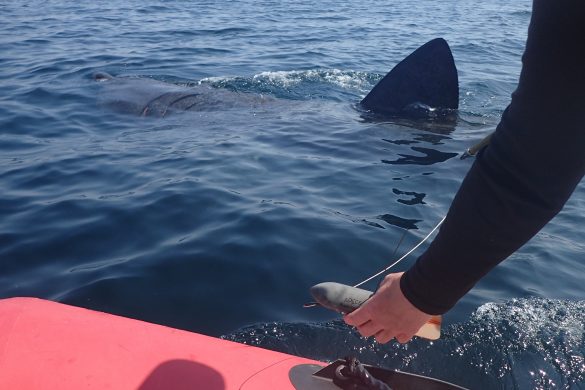 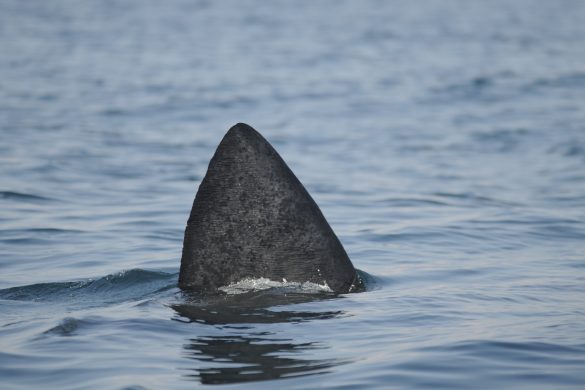 A giant manta ray asks for help from ...

Senegal wants to seize a Russian boat for ...

Important information for diving in France