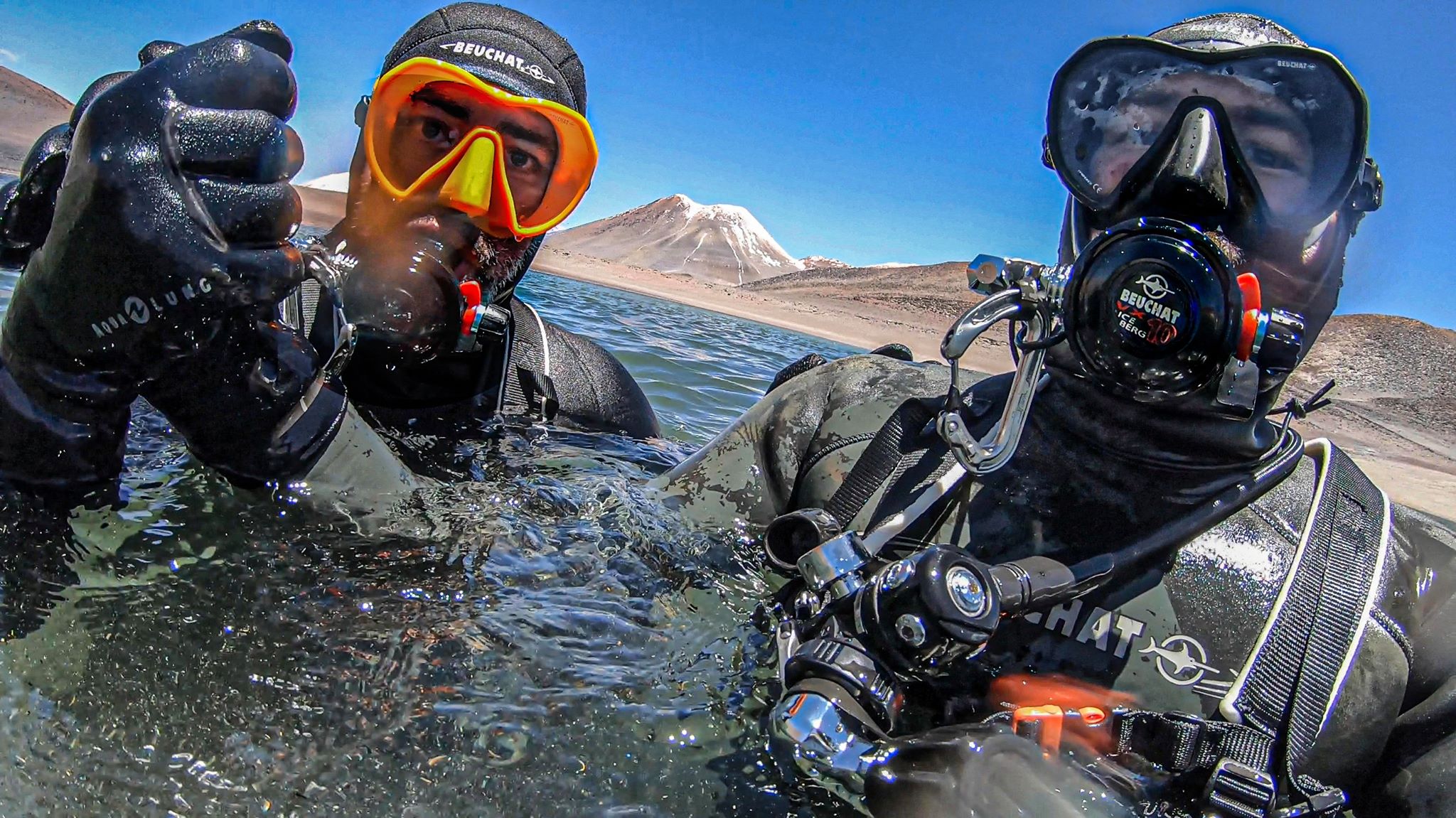 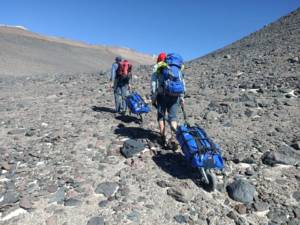 They did it ! Sebastien devrient, mountain guide and filmmaker and Frederic Swierczinsky, the extreme diver, have just completed an exceptional adventure: the exploration of high-altitude lakes in the Andes wile ice diving Argentina around the Ojos del Salado volcano, in the heart of the Atacama Desert.

More than two weeks spent between 3500 and 5800 meters of altitude in total autonomy, covering a distance on foot of 80 kilometers with a load of 50 kilos ...

Last year, they were already there for a sightseeing of the “end of the world”. An expedition that ended in a half success but still setting a new world record for high altitude diving. Frederic Swierczynski :

“We had 15 days of approach walking to acclimatize, with a last base camp at 5.500 meters. But we were surprised to experience heavy snowfall. Impossible to access the lake located at 6.400 meters: too much snow and ice. We had to revise our objectives… On February 19, 2019, I was able to dive to 5.870 meters, in a rebreather ”. 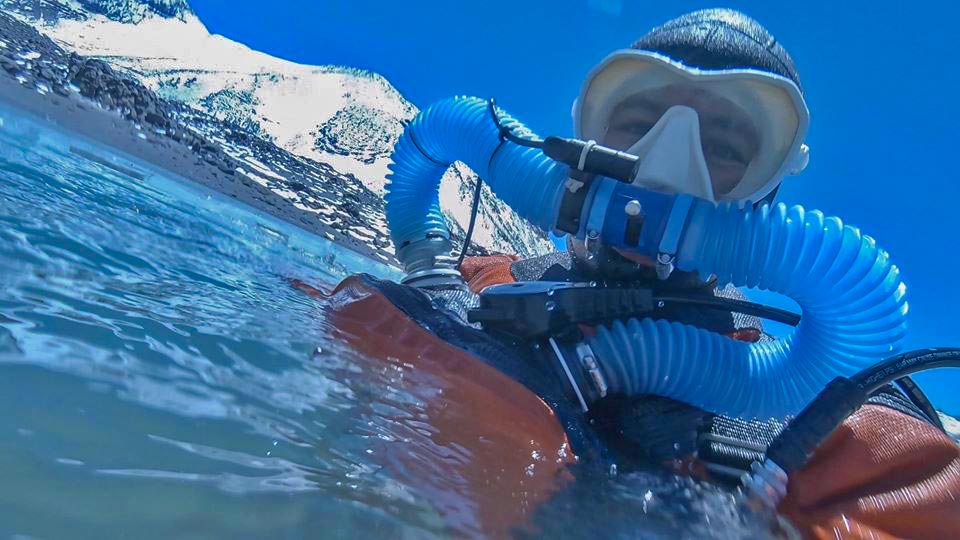 This year, the two buddies were repeating the feat. They targeted 6.400 meters, on the slopes of Nevado Ojos Del Salado, one of the tallest mountains in America. At this altitude, the lake should certainly be covered with ice and the water temperature around 2 ° C.

Just prior to their departure, we were with them at the hypobaric testing center of the Comex à Marseille where they were engaged in a simulation under the guidance of the Doctor Mathieu Coulange, head of the hyperbaric, underwater and maritime medicine department of the RUSH (Reanimation, Emergencies, SAMU and Hyperbare) pole of public assistance in Marseille hospitals. 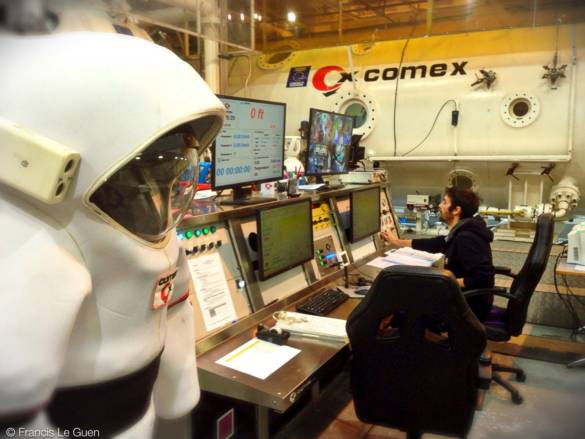 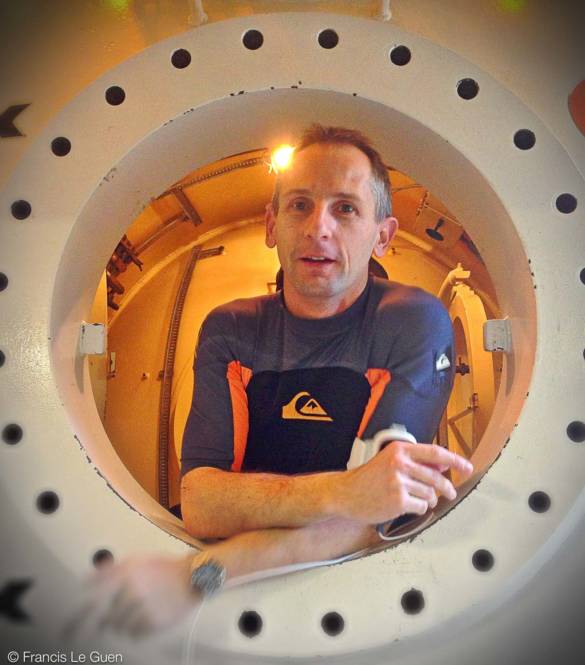 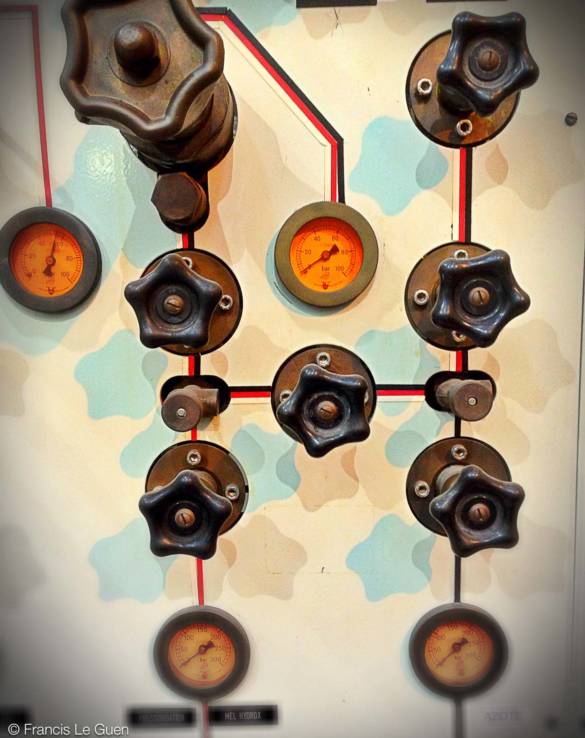 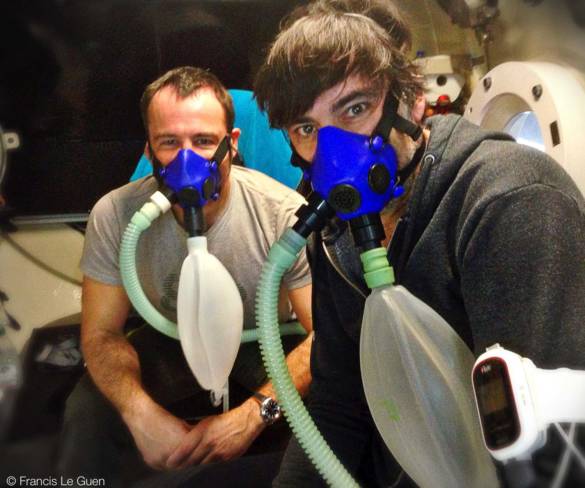 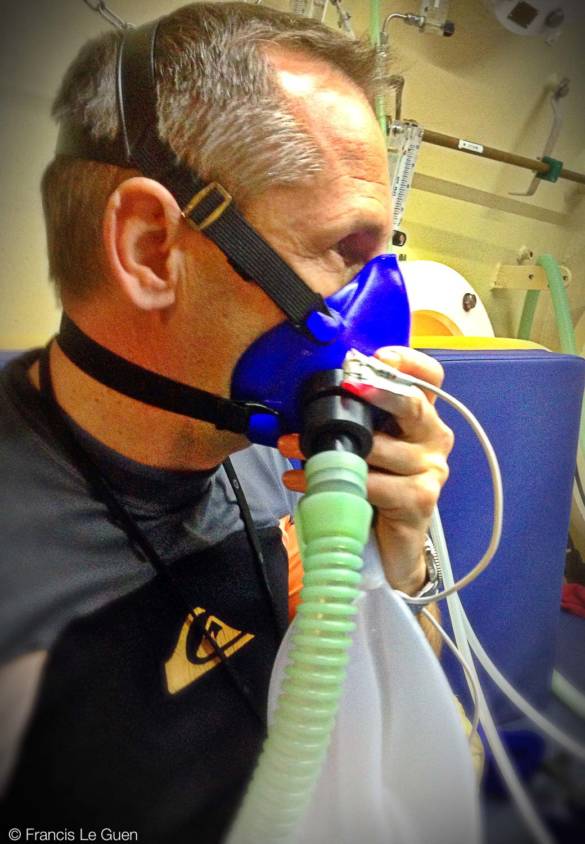 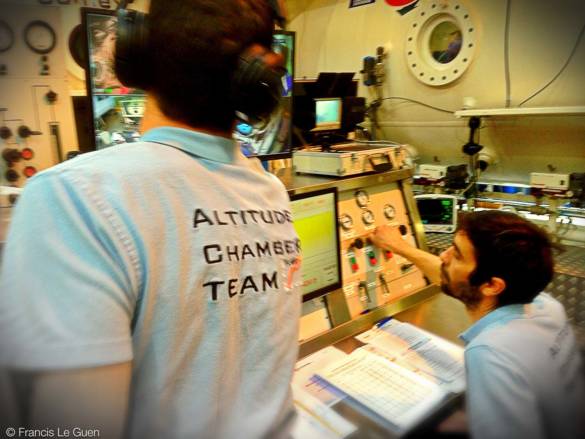 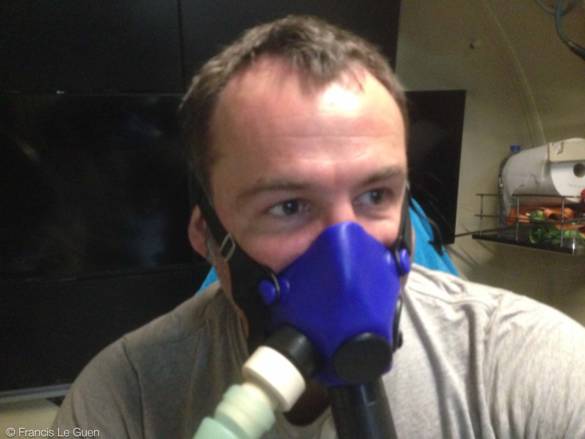 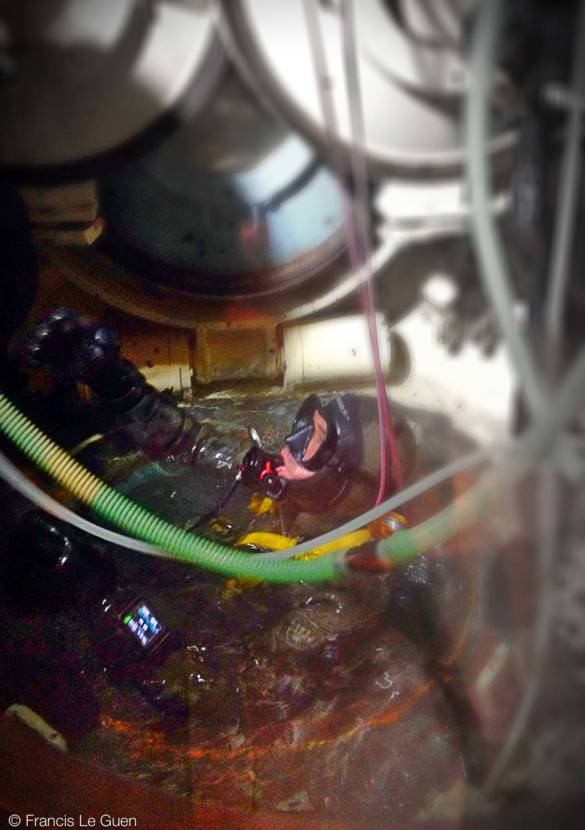 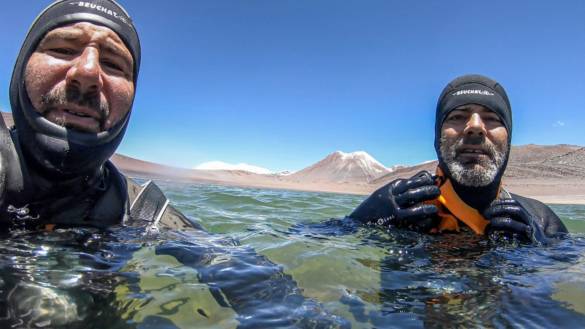 Accompanied by hyper and hypobaric doctors and physiologists, the two explorers first committed themselves to “denitrogenation”: 1 hour with an oxygen mask, at ambient pressure, to desaturate the body as much as possible with nitrogen. This is to avoid embolism during rapid ascent in altitude. Then, the doors were closed and the chamber placed in increasing depressurization, over a period of one hour, to a pressure corresponding to the altitude of 6500 m.

The two divers then fitted themselves with a 5mm neoprene “hunting” suit, air bottles and went through a new airlock to immerse themselves in a tank cooled to 2 ° C. All their vital parameters were monitored and recorded until their return to ambient pressure… And the Martians… © Vertiges Prod.

The expedition began with a bus trip of more than 30 hours between Buenos Aires and Cortaderas, a former customs post between the Chile andArgentina, at the gates of the atacama desert at 3500 m altitude. Then, the film crew progressed on foot, with guides and mules, over several days, to give the body time to acclimatize to the very high altitude.

Moments of emotion, at the 5.500 m pass, when Fred and Seb left alone, dragging their carts through the stones, in the wind and the biting cold, in search of water from “up there”… Nine days of exhausting walk with the lack of oxygen, in the heart of the storm and paradoxically of an extreme drought, to the point that the explorers will lack drinking water and will have to give up progressing higher.

After more than 80 km covered on foot (and 10 kg lighter on the scale), a lake appears at 5400 m. And the pair plunges into freezing water in a wet suit and with small bottles for a minimum of weight to transport. Another high altitude diving record! They make some images, take samples and specimens, not without some surprises and start their long return to normal Life…

“We are close to a space expedition,” says Frédéric. All the preparation is done at this level. There is 8% oxygen at altitude (compared to 21% on land). Finding yourself underwater, up there, is the same situation as an astronaut who makes an extra-vehicular excursion out of the international space station, in his spacesuit. We are doing studies on the physiological aspects of this type of diving: we are studying the reactions of our body! ”

47 years old, systems engineer, equally at ease in scuba diving, in mixtures, in rebreathers, in caves, in lakes, in resurgence and now in altitude: Frédéric has established himself as one of the most versatile explorers of his generation.

The feature film directed by Sebastien devrient et Prod vertigo will be screened in theaters in Switzerland and then in France with a preview scheduled for Marseille. May 2016. Port Miou (Calanques of Marseille). New deep gallery discovered in the “terminal” shaft, 1600 m from the entrance.

Other large-scale projects are currently in the pipeline: This Marseillais with his unpronounceable name has not finished surprising us!

[News] Sharkwave: A film with Jan Kounen and Steven Surina

the deepest dive in the world