Rare (and expensive) gas present at 0,087 ppm in the air. This is telling you the job to extract a 15 liter bottle at 200 bars. But who cares because Xenon is not breathable. When Xenon, xenon! Not breathable and in addition, xenon is a general anesthetic used in surgery: hello narcosis ... For journalists, no problem: we all breathe in “oxygen bottles”. This expression, which not long ago made all hyperbaric scholars that we are, is on the way to be true with the democratization of recyclers. Singular reverse of fate ...

In fact “the air of God” is a real crap: 79% of Nitrogen which serves no other purpose than to give you a rifle narcosis after 60 m, CO2 (which we make global warming) , carbon monoxide, toilet bowl deodorant and cigarette smoke in the airtight jars of airports where travelers in need are locked up and of course, oxygen, otherwise I wouldn't be here to write you these foolery. But also Argon, Krypton, Neon and the famous Xenon.

An “inert” gas? Even ... We now know a slew of chemical compounds containing Xenon. And besides, in the heroic era when we were testing different rare gases (see our article on l'Helium), I had undertaken a trimix dive using Xenon to inflate the drysuit. I came out of the experiment covered with red buttons of the most beautiful effect. A phenomenon of counter-diffusion undoubtedly interesting to study but the subject of experiment was especially occupied with scratching! Exit, therefore, Xenon as thermal insulator, Argon doing the job perfectly.

As for halogens: there is no pleasure ...

Indeed, before HID's and LED's, Xenon lamps shone in the firmament of underwater lamps and this gas became famous through the bulbs of the same name.

In diving, it is undoubtedly the lighting that has made the most progress over the generations. Imagine… The first underwater lamps for divers were petroleum! Or electric arc, between two carbon electrodes volatilizing visibly. In 1862, Cabirol (which usually goes with Denayrouse) thus developed an underwater kerosene lamp, connected to the surface by two pipes, one connected to a small air pump, and the other open, allowing the evacuation of combustion gases. Practical, in a cave, no?

And what about caving Norbert Casteret who was diving with his son Raoul in the siphons of Pyrenees with “4,5 v” flat battery pocket lamps enclosed in glass jars? Much later came the O-ring “waterproof lamps” with 3 round batteries, the “flagship” model of which was undoubtedly theAquaflash from Spiro. In the Middle Ages, we used to dive with 2 of these yellow lamps of a few watts attached to a construction or motorcycle helmet with another lamp, strapped to the forearm, “in redundancy”. This is how I got back from the 9:30 am rush hour to the cave of Hole Madam   Batch with only one lamp, flashing ... And that I reached -97m in the air in the big Goul of Tourne. At Ardèche, with two discharged lamps, glowing, the most beautiful effect ... The advent of halogen lamps was for us like the arrival of the Messiah. But no ! It was then necessary to scrap with excessively heavy batteries, crappy contacts and a whole bunch of customs complications during international flights.

So, today, the young people who have real power stations (me, it hurts my eyes…) do not know their happiness!

As for the photo, don't laugh, we were using lamps with magnesic bulbs, disposable! O tempora, o mores (it's rabbit ...) It was in 1926 thatHarold Edgerton, electrical engineer at MIT, begins a series of experiments on discharge lamps. He refines a tube containing xenon, capable of producing flashes of high intensity and extremely short duration, of the order of a millionth of a second.
Thus, during World War II, strobes of his manufacture made it possible to photograph the movements of enemy troops during the night. After the war, he was the photographer for ultra high speed nuclear tests.

Then, attracted by the work of the commander Cousteau, he developed equipment to take underwater photographs at depths unmatched at the time. We know what the rise of electronic flashes thereafter. Thanks WHO ? 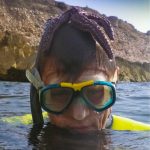 See you soon for a new definition of Scuba Bécédaire. The irreverent lexicon of diving, but not only. Because sometimes ...

In April 1952, Cousteau meet Harold E.Edgerton in the USA. In the pool of MIT, it tests for the very first time an underwater box and its flash Xenon.

And in 1953, development of an “image sled” with Albert Falco, François Saout, Harold E. Edgerton, Jacques-Yves and Simone Cousteau