Reunion is not necessarily on the charts of the most popular diving destinations, and the events of last year related to shark attacks have probably not helped. And yet! There are on the island to see and do, from drifters to whale watching, from the waters of the reserve to the drop offs off the sea. To reverse the trend, tourism professionals and diving centers have decided to mobilize and show imagination to welcome you.

A group of professionals of the diving

The group, created last year, brings together eleven professional diving structures, spread over the west coast of Réunion. Its vocation is the promotion and development of recreational diving on the island, the protection of Reunion's natural environment, and the respect of certain rules for welcoming customers, through a charter, the main points of which are: ensure supervision by professionals; certify the quality of the equipment and safety means provided and guarantee their maintenance; ensure respect, protection and awareness of marine biodiversity. Inform their divers that they cannot touch, move, throw or feed anything; insist on the importance of the practice of the diver (good stabilization, good kicking); respect a whale approach charter and specify that during these outings, the instructors on board received awareness either through an animal protection association or through their professional course.

Beyond the quality of the equipment and the importance given to respect for sites and animals, the members of the Group also intend to bet, through their charter, on the quality of reception of customers. They undertake in particular to limit the waiting time between baptisms to a maximum of 50 minutes; but also that the time taken to take charge of a baptized person is at least 20 minutes; for explorations, they wish to limit the number of divers to a maximum of 4 divers per instructor and per homogeneous group. The clubs that are members of the GPP attest that their instructors have a good knowledge of the dive sites.

This is undoubtedly the most innovative idea that the Centers of the Reunion Island diving professionals have just had: a diving pass, which you buy at the start of your stay, and which then allows you to dive à la carte, whenever you want, and in the Center of your choice. All you need to do is book 24 hours in advance, at one of the eleven centers (Abyss Diving, Aquabulle, Bleu Marine, Bleu Océan, Bulle air, Diving Escapade, Excelsus, Le dodo palmé, O 'Sea Bleu, Diving salty). This allows you to choose your site, your type of diving, and practice at your own pace in complete freedom. 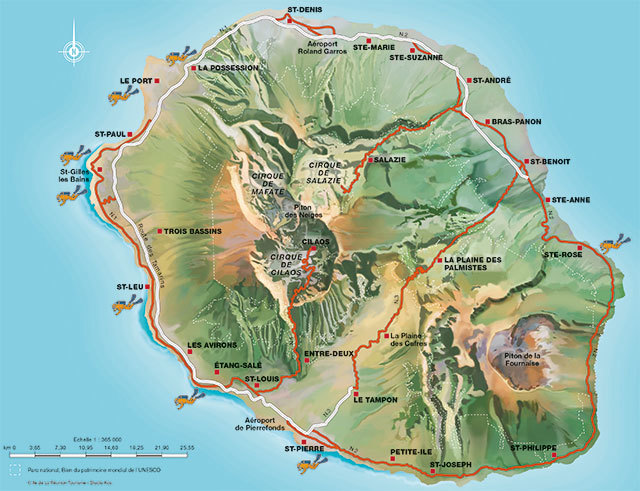 VARIOUS PRACTICES FOR ALL LEVELS

Given the variety of sites and the large number of clubs and centers, Reunion offers both dives for all levels, and varied practice conditions: baptism of course, or simple exploration, but also drift dives, night, “two tanks dive” (two dives in the same exit), “early morning” (we dive in the early morning to surface with the sun), or even photo courses, everything is on offer. Without forgetting the snorkeling on the coral reefs, for non-divers or the youngest.

IN THE WATER OF THE RESERVE

It is mainly in the waters of the reserve that the 25 local clubs take you to dive. Created 5 years ago, it protects 35 km² of coastal fringe: 80% of Reunion's coral reefs can be found there, and a biodiversity that has nothing to envy to other better-known destinations in the Indian Ocean. In 2012, more than 3000 animal species were listed there, including 20 species of sponges, 366 species of cnidarians (corals, jellyfish, anemones), 1305 species of molluscs (octopus, squid, shellfish), 200 species of crustaceans (lobsters , crabs, shrimps), nearly 100 species of echinoderms (sea urchins, "sea caterpillars", brittle stars), 40 species of rays and sharks, nearly 1000 species of bony fish, turtles, sea birds, and cetaceans . 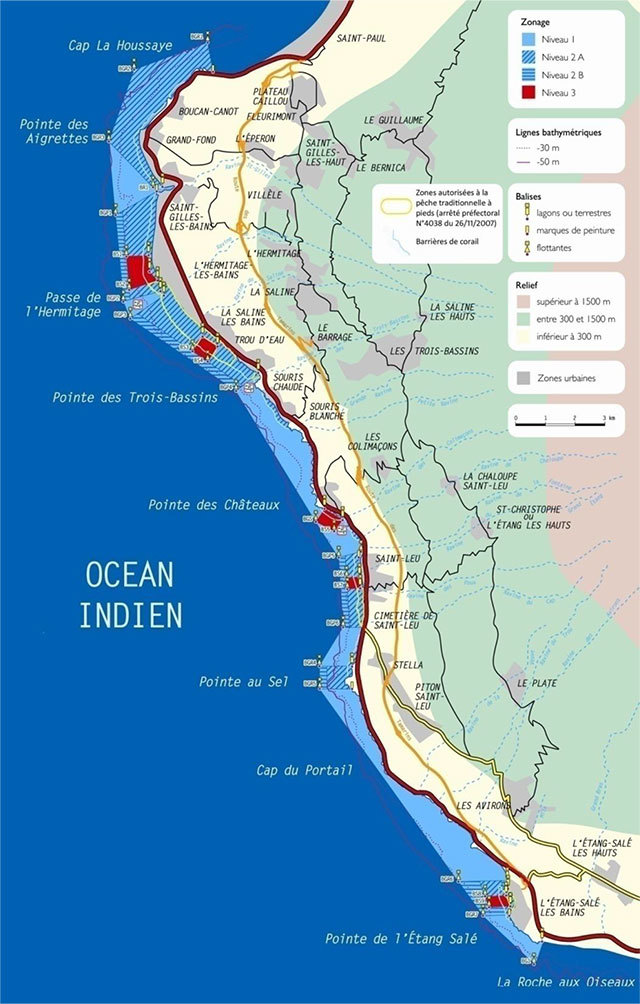 There are also some beautiful wrecks in the waters of the island, including that of the Haï Hsiang, a Taiwanese lobster boat sunk in the 80s, and that of the Antonio Lorenzo. But also canyons, caves, dens of large, good-natured groupers. At the Hermitage pass, turtles and schools of rays take center stage. And further offshore, along the drop offs that descend to more than 70 meters, it is the domain of large pelagics such as tuna, trevally, king mackerel, sailfish, banana tunas ...

On the open sea side, it is not uncommon to come across cuvier or blainville beaked whales, right whales, dwarf orcas, dwarf sperm whales ... and of course humpback whales, which come to give birth every year and raise their young in the gentle Indian Ocean. Réunion is also committed to a whale protection policy, notably by encouraging the whaling commission to maintain a sanctuary for cetaceans in this region of the world. This initiative was launched by the Réunion Region, in partnership with the Abyss and Globice associations, as well as the Island of Reunion Tourism.

If it is possible to dive all year round in Réunion, in water that fluctuates between 22 degrees in winter (from May to September) and 30 degrees in the hottest of summer (from October to April), the beginning of summer is recommended for those who want to avoid the crowds during the most touristic months. From February to May, this is the best period to take advantage of the coral reefs, rich in juveniles and predators. Finally, from July to September, in water that turns around 24 degrees and is then particularly clear, it is the season for humpback whales.

It's hard not to mention sharks when talking about Reunion. However, remind local professionals, “there has never been an accident in 50 years of divers' memory, and there is almost no risk of ending up 'nose to nose' with a shark. On the contrary, they remind us of the constant threat weighing on predators, and the essential role they have to play in safeguarding marine biodiversity.

Last year, Reunion Island recorded more than 60 dives, but only one in six concerned a tourist ... When other destinations seek to show divers their terrestrial riches, it is the opposite path that Reunionese clubs must take !

Diving in Lanzarote at Aquasport Diving

Special dedication to Christophe W. for making me discover this madness !!!