Home All SectionsNews SALON OF THE 2013 DIVING: A GREAT CRU
News

Nearly 55 visitors this year, an increase compared to last year, while the Show lasted three days instead of four: that is to say that the event was full!

FEWER GUESTS, AND A LOT OF WORLD ON FRIDAY

This year, the entries were less concentrated on the weekend, and from Friday the aisles of the show started to fill up. Many had bought their entrance tickets by correspondence via the Billetel service, in advance, and were therefore not there by chance! The website of the show, between the beginning of September and the closing, has also recorded more than 120 visits, proof of the interest aroused: a success that is undoubtedly due to the richness and variety of the activities offered. .

Compared to 2012, the number of exhibitors increased by 15%. And whether they are new exhibitors or regulars, everyone has to try to innovate, to stand out, to liven up their stand in one way or another.

The theme of the year, around our freediving champions, perhaps attracted a somewhat larger audience, beyond die-hard scuba divers, as evidenced by the growing number of articles published this year in the general press, and the number of reports broadcast on major national channels. Enough to open up new horizons for next year, and perhaps build new beginner divers.

The “BLEUE PASSION” team, in partnership with Turtle Prod and the Salon, delivered an exhibition of freediving images that caused a sensation. Moreover, from a well-informed source, a book should see the light of day within a few months.

Thanks to Philippe JOACHIM, Alain PONCHON & Philippe LECOMTE for these images

SOME POINTS OF VIEW

“An excellent grind. We had the pleasure of meeting many of our loyal customers, but also new ones. The trend seems to be very promising. We are also delighted because the many requests show that Egypt is finally on the way to really restart. ”

“It was our eighth participation in the Salon de la Plongée, and this edition was particularly successful: many people, more and more divers attracted by the destination Mexico, and a real dynamic around our freediving champions! We have already booked for 2014, the Show is really an unmissable event, and the opportunity to see again the divers we have welcomed in Mexico and to share memories. ”

I DIVE IN THE WEST

“The sound of the biniou traveled the aisles of the 15th Salon de la Plongée thanks to
to the Breton musicians who came to animate the stand “Moi, je plonge à l'Ouest!”, a first. We have met a lot of divers declaring themselves “to the West” and many others who have come to discover this region so close but nevertheless underwater little known. The t-shirts and other products from the “Moi, je plonge à l'Ouest!” Series were a great success and the dive centers were able to proudly promote their destination to visitors to the Show. Appointment is made for the 2014 edition. ” 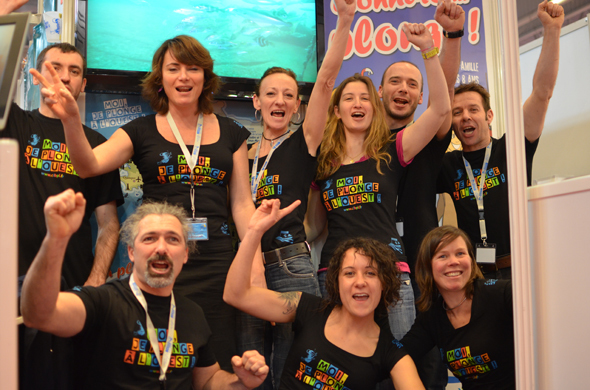 “As much as the penultimate show left us unsatisfied, this one exhausted us… and we are delighted! Lots of requests that will hopefully be successful quickly. ”

“Our stand created a surprise and that was my goal. Indeed, the structure was completely closed to the outside but the bravest were able to discover a bar serving futuristic drinks… fluorescent yellow things that smoke thanks to the addition of liquid nitrogen… strange. ”

For our 1st participation, we had made the bet of all success. Chairs, table, stools and even the 2-meter-wide bar were completely bio-degradable. We must admit that once the surprise passed all the visitors were seduced. The bar was never empty and a lot of pros quickly got into the habit of coming to greet us several times a day. This has enabled us to sign a number of new partnerships, confirming our belief that our work is bearing fruit.

THE question that arouses passions after this edition is to know what is the best formula?

And you as visitors, what do you think?

COLOMBUS ISLAND DIVING AT THE BAHAMAS

ALL A POIL by FRANCIS LE GUEN

THE FESTIVAL FOUNDATION NEEDS YOU

The Wonderful World of Underwater Fluorescence